You are here: Home / Beers / Patent No. 718253A: Concentrated Hopped Wort And Process Of Producing Same

Today in 1903, US Patent 718253 A was issued, an invention of Herbert Amos Hobson of London, England, assigned to the Concentrated Beer Company Ltd., for his “Concentrated Hopped Wort and Process of Producing Same.” There’s no Abstract, or any drawings filed with the application, but here’s the introductory overview:

This invention relates to the production of a hopped wort from which beer, either alcoholic or non-alcoholic, maybe produced by the mere addition of yeast and water or of water alone, as the case may be.

In the ordinary brewing process the malt is first mashed and the hops are then added to and boiled in the wort or extract of malt, with the result that the bitter of the hop is unfavorably affected, objectionable resinous matters are extracted, and the volatile aroma of the hops is to a great extent lost, and these undesirable results are partly due to the length of time for which the boiling is continued and partly to the high boiling-point of the liquor in which the hops are boiled. It is the object of this invention to avoid these defects and to produce a hopped wort, preferably in a concentrated state, possessing the keeping qualities necessary for export purposes and adapted for the production, in the locality or country of consumption, of beer possessing the characteristic qualities of beer brewed in the ordinary manner.

While there weren’t any images in the filing, this is a flowchart of Alternative Sources of Hopped Wort from a homebrewing website in South Africa. 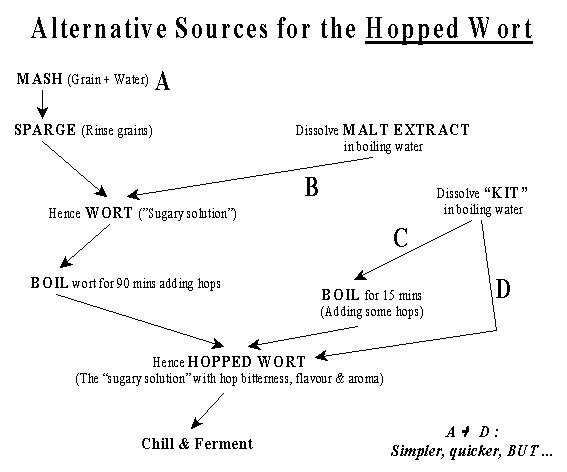