You are here: Home / Beers / Patent No. 196297A: Improvement In Beer-Cooling Apparatus

Today in 1877, US Patent 196297 A was issued, an invention of Charles P. Hovey, for his “Improvement In Beer-Cooling Apparatus.” There’s no Abstract, although in the description it includes this summary:

It is to obviate these difficulties, and to produce a cooler which may be readily transported from place to place for use, and which may be placed under an ordinary counter, that my invention is designed.
To this end I construct a chest, A, of wood or other suitable material, and line its interior partially or entirely with galvanized sheet-iron, zinc, or other suitable material, after the manner of constructing an ordinary ice-chest. The chest is provided with one or more removable sides, H, and a removable, cover or top, B, through which access may be had to the interior of the chest. At or near one end of the chest, inside of the same, is located an air pump, G, of any suitable construction, it being secured to one of the walls of the chest by means of screws or other suitable means.

The cask which contains the beer is placed inside of the chest, in such position as to leave an open space all around it between it and the walls of the chest. In the upper end of the cask a cylindrical tubular plug or drive, m, is inserted, and through this plug passes a tube, the lower end of which passes down to, or nearly to, the bottom of the cask, while its upper end terminates in a faucet, F, of any suitable construction. A packed joint is formed at the upper end of the plug or drive m, where the tube 0 passes through it, but below this point an annular space is left between the tube and the interior of the plug or drive m. A tubular projection, I, is formed on one side of the plug or drive, communicating with the annular space just mentioned, so that connecting’ the pump G and the tubular projection, by means of a short tube or pipe, air will be caused to pass into, the area when the pump is operated, and maybe held there by turning the small cock. shown near the tubular projection. It will be observed that all the parts of this apparatus are placed Within the chest, except B and D, as shown, at a point directly in line with the tube or pipe 0, a semicircular nc tch being made in reach section to it around the same.

In order to close the lid or cover when the pump is not being used, and at the same time I to render the pump readily accessible, a portion of the 1id, G, is out and hinged to: the main portion B, as shown, the portion is being directly over the pump. If preferred, however, the handle of the-pump may extend up through the top or cover in the same manner as the tuber or the pump maybe attached to r the outside of the chest, with its supply-pipe opening into the same. The pump, caslg and tubes being all placed within the ice-chest, it is apparent that the air which is forced into the cask must be cold and pure, and the pipes being short, the air and beer will pass through them Without becoming in any Way affected thereby.

The apparatus thus constructed occupies but a small amount of space, and can be placed under an ordinary counter, or it may be made ornamental in appearance and I placed in sight; can be taken from place to place for picnics and exeursiolis, and is cheap to manufacture. 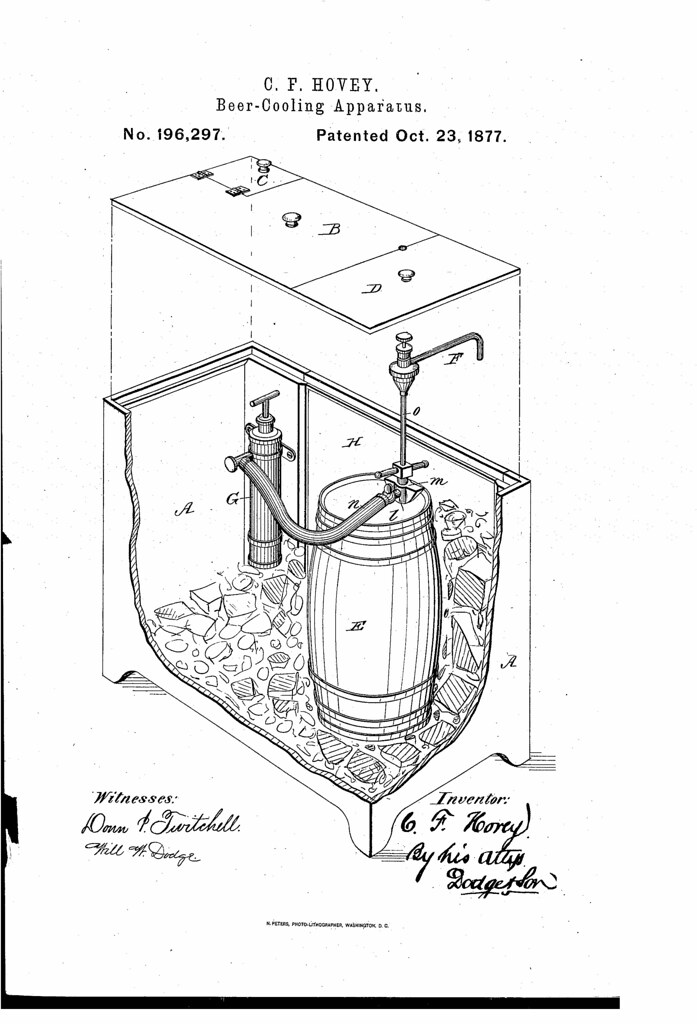