You are here: Home / Beers / Patent No. 220773A: Improvement In Bungs And Stoppers For Casks

Today in 1879, US Patent 220773 A was issued, an invention of William H. Stewart, for his “Improvement in Bungs and Stoppers for Casks.” There’s no Abstract, although in the description it includes these claims:

My invention relates to bungs and stoppers for faucet holes in lager-beer and ale casks and kegs; and it consists in the exterior form of the bung or stopper, whereby it is adapted to be more easily driven into the cask or withdrawn therefrom when desired.

Heretofore such stoppers made of wood or cork are objectionable, for the reason that the gases readily penetrate the pores of such materials and leave the beer or ale unfit for use in consequence of becoming flat or stale. The wood and cork will become saturated with the liquid, and after being once used will become sour and injuriously affect the beer.

In the use of the elastic bung or stopper I find that great difficulty exists in extracting it in the form in which it has heretofore been made from the aperture in the cask or vessel, on account of the adhesive properties of the rubber, and this especially is the case when using it for lager-beer or ale casks, where the aperture is wood or iron bound. If the bung or stopper is made very hard, or even hard enough to drive easily in the aperture, there is no certainty that the aperture will be perfectly sealed, as the harder the composition the less the elasticity,and the less the certainty of its filling any irregularities that may exist in the aperture. On the contrary, if the composition be made softer to gain more elasticity, then the difficulty of driving in the bung or stopper occurs, as the composition sticks and adheres to the sides of the aperture, and after as shown in Fig. 5, being once driven in is very difficult to extract.

The special object of my invention is to overcome these several difficulties by making a bung or stopper which can be readily driven in or extracted, and which will also perfectly seal the aperture in the cask. 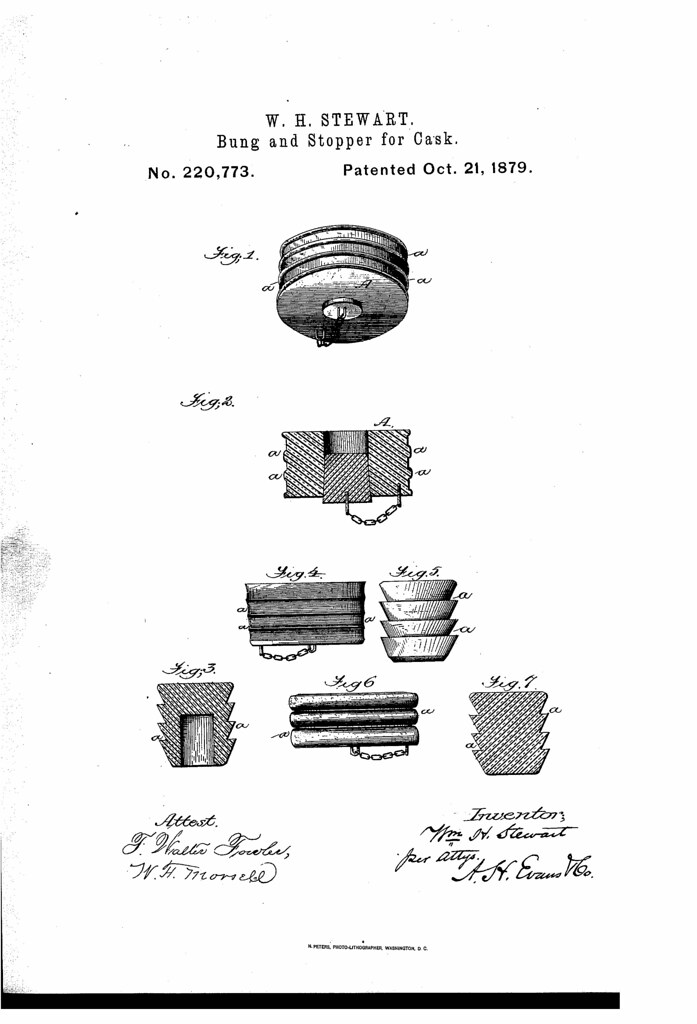