Today in 1941, US Patent 2252235 A was issued, an invention of Nicholas Snelling, assigned to the Zimba Beverage Co. Inc., for his “Bottle Carrier.” There’s no Abstract, although in the description it includes this summary:

This invention relates to devices for carrying Orr-supporting bottles of various kinds and classes, and particularly bottles having removable closure caps; and the object of the invention is to provide a supporting device of the character described made from heavy `paper or light cardboard which is die cut, printed, lithographed, or otherwise characterized, and then folded to form a means for carrying, handling, or assembling bottled goods either individually or collectively so as to facilitate the handling and packaging as well as delivery thereof; a further object being to provide a device of the character described having an apertured portion from which or by means of which the device including the bottle or bottles thereon may be suspended or carried; a further object’ being to provide’a device of the character described wherein a number of bottles may be collectively packed in a carton or shipping case with the carrying lor suspending device attached thereto or to a number of bottles in a compact and collapsed manner and whereby the group of bottles may be simultaneously removed from the carton or shipping casein the removal of the supporting device therefrom thereby simplifying the handling of merchandise of this kind by the merchant and also facilitating the packing and carrying thereof a still further object being to provide an improved method of constructing a device of the character described `so as to adapt the same for use in a’ continuous assemblage upon a multiplicity of bottles moved relatively thereto so as to` expedite the assemblage of the device to groups of bottles, and further to incorporating a device of this character upon bottled goods in the operation of capping or sealing the same; and with these and other objects in view, the invention consists in a device of the class and for the purpose specified which is simple and economical in construction, and which may be produced and used in accordance with the method more fully hereinafter described and claimed. 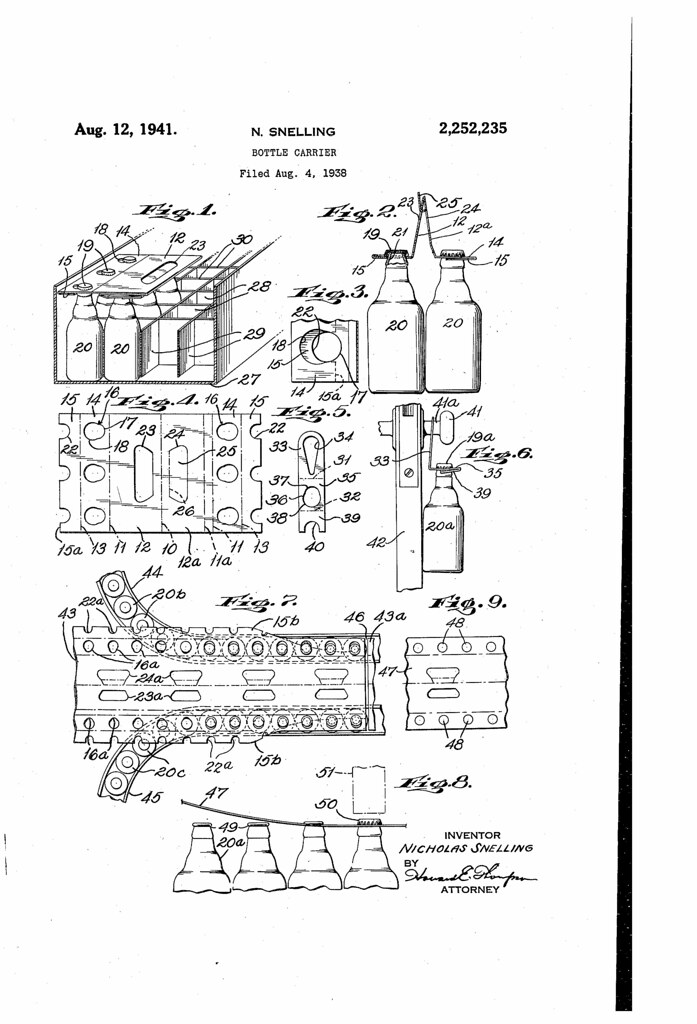