Today in 1959, US Patent 2917906 A was issued, an invention of George Craig Woolley, for his “Portable Cooler, Gasser, and Dispenser for Keg Beer.” There’s no Abstract, although in the description it includes these claims:

This invention relates to a readily portable device for supporting and completely servicing a keg or small barrel of beer or other beverage which requires for proper draught and taste characteristics, cooling, gassing and controlled dispensing. My present invention is particularly designed and conceived for home rather than commercial use where it is desired to dispense a draught beverage such as beer to a group of people, from a keg.

At the present time the distributors of various malt beverages supply to their customers, cooling and gassing apparatus for small gatherings, usually employing a helical coil to be placed in a box of ice and an air pump or carbon dioxide cylinder of heavy construction. The apparatus is hooked up at the home and in many instances, the keg heats up (since only the discharge through the coil is cooled), the saturation level of the gas is consequently decreased in the beer and more gas is released, resulting in foam when the beverage is dispensed. The coil, if not thoroughly cleaned and sterilized after each use, is unsanitary and gives the next user an off taste beer; Cleaning time of such-coil requires from a half to a full hour and is often disregarded by the dissumption of the entire contents of the keg.

A further object is the provision of a device of the class described wherein a simple, compact wheeled chassis serves the multiple functions of a keg-support, a refrigerating chamber, a mounting for controlled gassing and dispensing mechanism and in addition, a valuable source of advertising for the distributor or manufacturer of the beverage.

Another object is to provide a compact, rugged device of the class described of simple and inexpensive construction affording a high degree of sanitation and provision for sterilizing of the few dispensing parts. 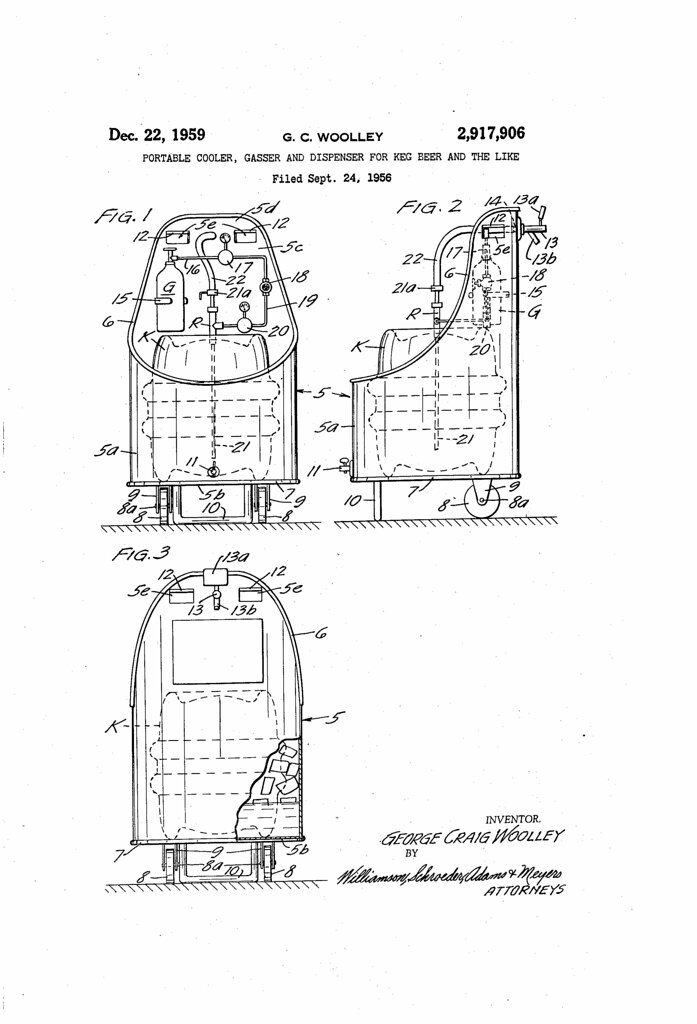