Today in 1885, US Patent 327099 A was issued, an invention of William Painter, for his “Bottle Stopper.” Painter patented a number of bottle-related items, but is undoubtedly best known for having invented the first crown bottle top. There’s no Abstract, although in the description it includes this summary:

My invention is particularly designed for use with bottles or similar vessels containing fluids under pressure from eft’ervescence or otherwise; but it is adapted as well for use where such pressure does not exist.

Stoppers have heretofore been made secure against internal pressure in one of two ways by using a tie-wire, also by special stopperriety; or by placing the stopper inside the bottle and so arranging it that the stopper is forced against a seat or packing by the pressure within. The first of these methods is objectionable because of the expense, and in some cases the inconvenience of its use and liability of accidental opening, The second is so for the same reasons, and for the outside of the bottle is an obstruction to ready and effectual cleansing both of the bottle and stopper. Stoppers secured by external fastenings are retained solely by the power of the device to overcome the internal pressure. Those within the bottle are retained because they present a solid mass too large to pass through the bottleneck. In neither case referred to does the lateral expansion of the stopper itself against the interior of the bottle mouth enter as an element of its action in resisting internal pressure, as it does with stoppers made according to my method.

My invention differs from all others in the respects named. It is made of thin material, and placed within the bottle. neck or mouthward, so that it presents the resistance of an inverted arch or dome having its haunches supported by contact with the walls of the bottle-mouth, which are preferably indented or grooved to afford a more secure hold. Pressure upon an arch is always transferred in part as lateral pressure against its abutment, while a similar pressure upon a solid body having the same convexity does not tend to I displace the abutment laterally, but to shear of the bottle neck and stopper off the edges of such solid body. This physical principle illustrates the actual difference between my cup-shaped disk-stoppers and all others with which I am acquainted. 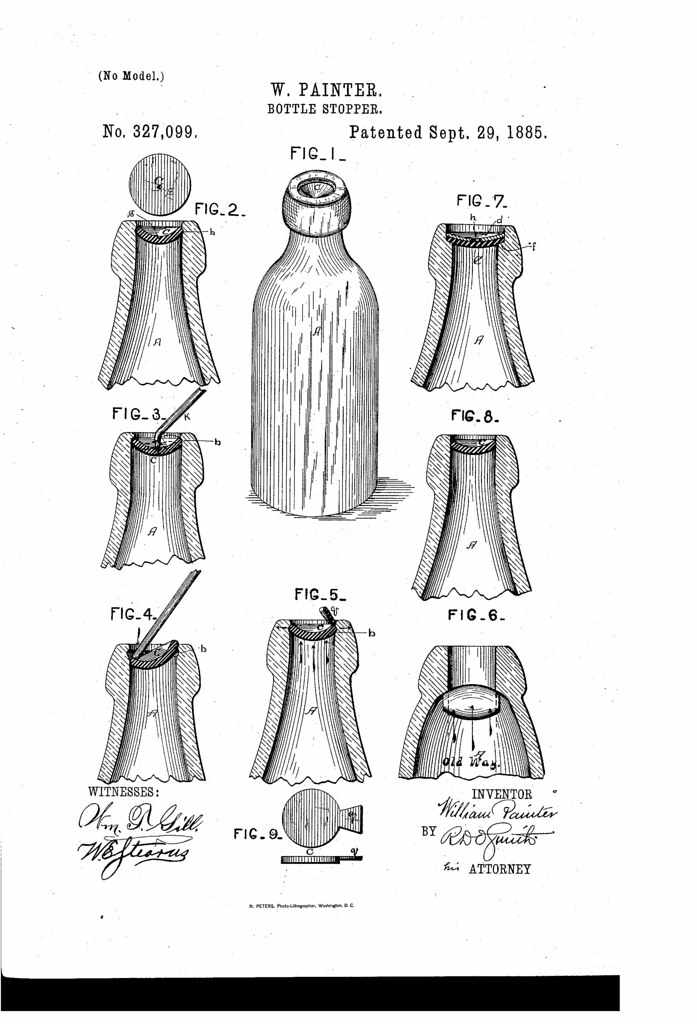