A gluten-free beer obtained from a mixture of starting materials comprising buck wheat, rice malt and optionally a component chosen from the group comprising corn, sorghum, millet and/or syrups thereof; this component is preferably corn syrup; the beer is obtained by saccharifying the above-mentioned mixture, optionally in the presence of amylolytic enzymes and glucanase, and it is particularly suitable for consumption by gluten-intolerant individuals.

Surprising this patent was issued in 1999, a bit before gluten-free became “a thing.” I was taking classes at UC Davis when Anheuser-Busch was sending samples of their gluten-free Redbridge to Dr. Michael Lewis, who had recently discovered he suffered from celiac disease. I ended up doing an article about the science behind gluten-free beer for Zymurgy magazine and did a tasting of gluten-free beers for it at Davis right after A-B debuted Redbridge, and that was in 2006. As far I know, I haven’t seen a gluten-free beer from Heineken, although I seem to recall that their beer is low in gluten. 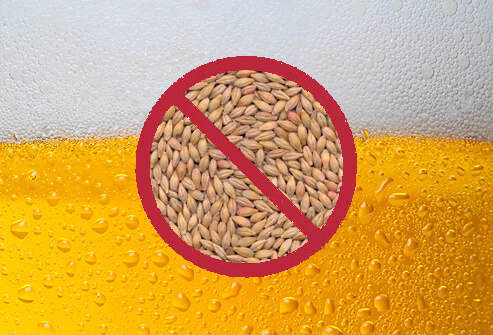