SABMiller released a statement this morning rejecting the latest takeover offer from Anheuser-Busch InBev. You may, or may not, be able to read the statements released by SABMiller on their website, and there are some fairly scary disclaimers including language that, depending on your jurisdiction, claims that the publicly available information may not be legal to read, and in such case advise you to “exit this web page.” Which while I’m sure is required by some law, probably UK law, also feels fairly ridiculous. At any rate, quite a few news outlets, such as the Wall Street Journal, Reuters and the New York Times are all reporting on it, so it must be okay for the likes of me.

The gist of it is the SABMiller board unanimously rejected ABI’s latest takeover offer, for the primary reason that they believe ABI’s offer “substantially” undervalues their company (currently the offer values SABMiller at $104 billion), among a few other technical reasons having to do with the timing, regulatory issues and others. The current offer is for roughly £65.14 billion, which is $99.76 billion dollars.

The Wall Street Journal helpfully created a graphic showing the recent history of the potential deal as it’s been unfolding. 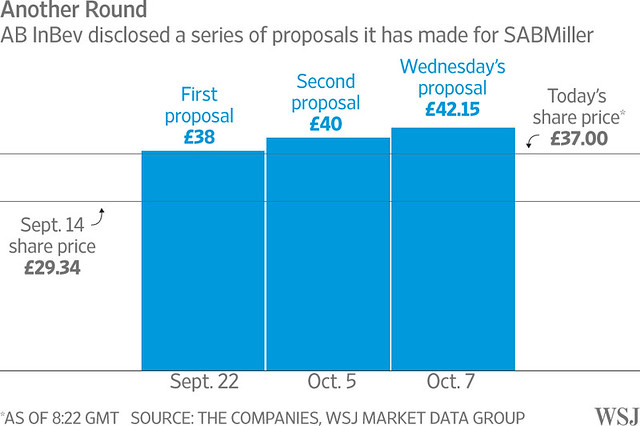 There’s little doubt this is not the end of it, but there will continue to be a back and forth as this high-stakes game unfolds. And it really is a game, sad to say. Apparently negotiations have been tense, which really should not come as a shock to anybody, yet you see statements like this. “AB InBev is disappointed that the board of SABMiller has rejected both of these prior approaches without any meaningful engagement.” The absurdity of that reveals the gamesmanship involved, as it plays out in the media. It’s going to be an interesting few weeks.