You are here: Home / Beers / So It Goes: Kurt Vonnegut’s Beer Heritage

Sad news indeed was the passing of Kurt Vonnegut yesterday. Besides being one of America’s finest minds and literary talents, he was a favorite author of mine since I first read Breakfast of Champions at around age 14 or 15. Over the next few years I read Slaughterhouse Five, Cat’s Cradle, Player Piano and Welcome to the Monkey House, along with most of his other early books. Till the end his mind remained as agile as ever, evidenced by his searing appearance on Jon Stewart last year. 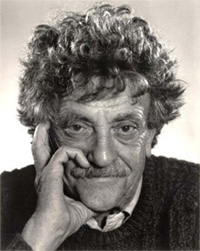 Paul Gatza, Director of the Brewers Association, reminded me of a story I’d almost forgotten about Vonnegut’s family and their association with beer. His grandfather, Albert Lieber, was heavily involved in the brewing industry in Indianapolis, Indiana. Albert’s father, Vonnegut’s great-grandfather, was Peter Lieber and he owned P. Lieber & Co (a.k.a. City Brewery) which later joined with two other Indianapolis breweries to form the Indianapolis Brewing Company in 1887. And in 1904 they won the grand prize gold at the St. Louis World’s Fair. Apparently one of Vonnegut’s short story collections also recounts this story, possibly “Palm Sunday.”

There’s a nice history of this at Indiana Beer, so let’s pick up the story with their account.

Kurt Vonnegut’s grandfather was Albert Lieber. The recipe for a dark lager beer that Peter Lieber devised was brewed by Wynkoop Brewing, Denver, in 1996 to celebrate the new library there. It was called Kurt’s Mile-High Malt. A “secret ingredient” of the brew was coffee.

I also recall someone telling me the father of Wynkoop’s founder — and current mayor of Denver — John Hickenlooper was a friend of Vonnegut and that he, too, is mentioned in one the novels, but I can’t for the life of remember if I ever knew which one.

One of the more personal tributes I’ve read was by Denver Post staff columnist and sports writer Woody Paige, a self-avowed fan, and entitled “My muse, more or less.” In it, he tells an undoubtedly more accurate tale of how Kurt’s Mile High Malt came to be.

Vonnegut came to Denver in 1996 to show two dozen of his sketches at a gallery and to introduce a new short story he had written for the label of a beer bottle. As he might say, most of what I’m telling you is true, except the parts I’m making up.

The owner of a LoDo microbrewery had the grand idea of producing specialty beers with famous authors writing stories for the labels. The brewpub owner, a disheveled sort, worked up the courage to ask Vonnegut to contribute, and he agreed, under the condition that the beer’s recipe be the same as his grandfather’s, brewed commercially in Indianapolis before Prohibition.

It turned out that the brewpub owner’s father lived down the hall from Vonnegut, and was his fraternity brother, when they attended Cornell. (Vonnegut later attended Tennessee, which is my school, and you’re thinking I’m making all of this up.)

The secret ingredient in the beer – called “Kurt’s Mile-High Malt” – was coffee. Vonnegut’s story on the label was entitled “Merlin,” about a golden knight with an automatic weapon.

Vonnegut documented his Denver visit in his last biographical novel, “Timequake,” and told of meeting his friend’s son — the brewpub owner.

“Ting-a-ling,” as Vonnegut would write.

Hickenlooper knew of my idolization of Vonnegut and invited me and my daughter to spend time(quake) with Vonnegut. My daughter sat on a bus bench with him and talked about colleges, and I later had a beer with him.

Does anybody have a copy of the story or the label? I’d love to include it here if anyone does have it. Thanks. We’ve lost one of this country’s literary treasures, IMHO. Let’s all raise a glass to his memory with Vonnegut’s own words.

Still and all, why bother? Here’s my answer. Many people need desperately to receive this message: I feel and think much as you do, care about many of the things you care about, although most people do not care about them. You are not alone.

UPDATE: Craig Hartinger from Merchant Du Vin sent me this photo of a reproduction poster of the Indianapolis Brewing Co. from around the same time as they won the gold medal in 1904. There’s also one of these hanging in the Celebrator’s offices, too. Thanks, Craig. 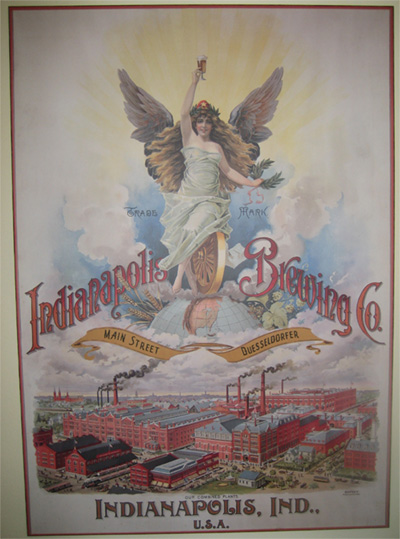