If you’re like me, you love what I call “brewery porn,” which is photos of brewing equipment either installed or by themselves. So when I watched the film reboot of Star Trek, I was convinced that portions of the movie — the engineering deck — were filmed inside a large brewery. Sitting in the darkened theater back in May, I remember thinking it looked a lot like Anheuser-Busch’s brewery in Fort Collins. But I forgot about it until last night, when I re-watched the film on DVD. It turns out I was half-right. It was filmed in a large Anheuser-Busch brewery, but it was the one in Van Nuys, California (which in retrospect makes sense, since it’s closer to Hollywood).

Reading over the Trekkie chatter about the movie, it appears that the decision to use the brewery as stand-in for the engineering deck was one of the least popular things about the new film. But perhaps what was most surprising was that, while to anyone reading the Bulletin or who’s been inside a brewery it was completely obvious, many people didn’t even realize what it was. But if you did know, it was a bit jarring and made it more difficult — as critics charged — to continue the suspension of belief necessary to get lost in the story. One common criticism I didn’t agree with was that while the rest of the ship was all shiny and new looking, the engineering deck (brewery) looked dark and dingy. But remembering the tours of cruise and military ships I’ve been on, that’s the way it often is. The places for the passengers are decorated for comfort and are appealing to the eye while in the places where it’s just for the employees, such niceties are ignored and decorated merely for convenience and functionality. Below are a few screencaps and other photos from the film inside the Anheuser-Busch brewery in Van Nuys. Being a Star Trek fan since I was a kid, I still liked the film and would recommend it on its own merits. Despite certain anomalies and inconsistencies, it was still entertaining and enjoyable to watch. Except, of course, for the brewery. 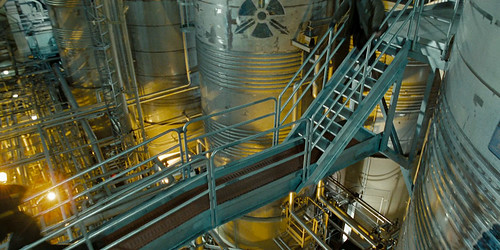 Nuclear symbols were painted on the fermenters to make them look more reactor-like. 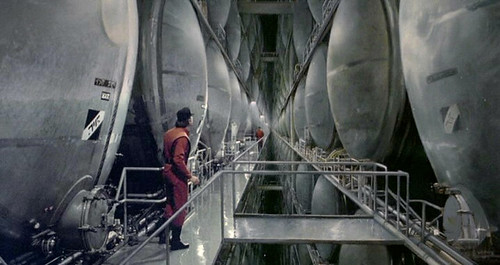 A screen cap from the film inside the brewery in Van Nuys. 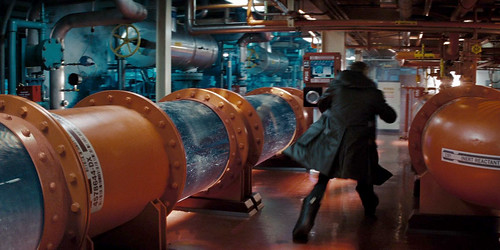 Another screen cap, this one after the characters Captain Kirk and Scotty beam back aboard the Enterprise. 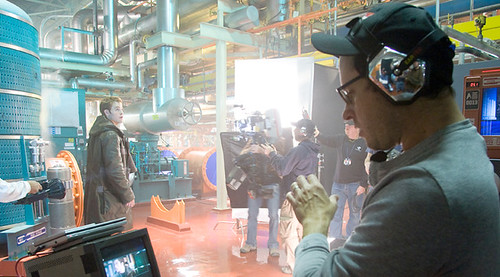 Director JJ Abrams (in the foreground) directing Star Trek inside the A-B brewery. 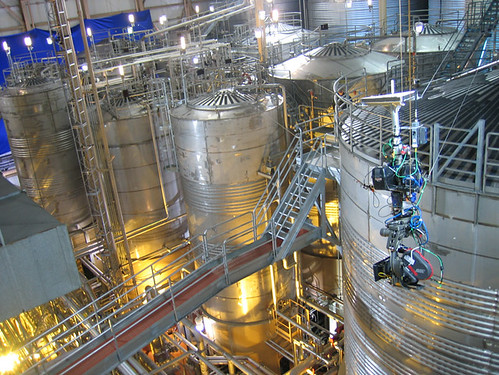 In this view, similar to the first one, you can see the flying camera used, and developed by J. Patrick Daily.