Today’s infographic is from the BJCP, showing the color range for each of their defined styles, though I found the chart through a link at the Home Brew Manual, where you can download a very large pdf. It’s got their logo on it, so it’s probable they created it with the BJCP data. 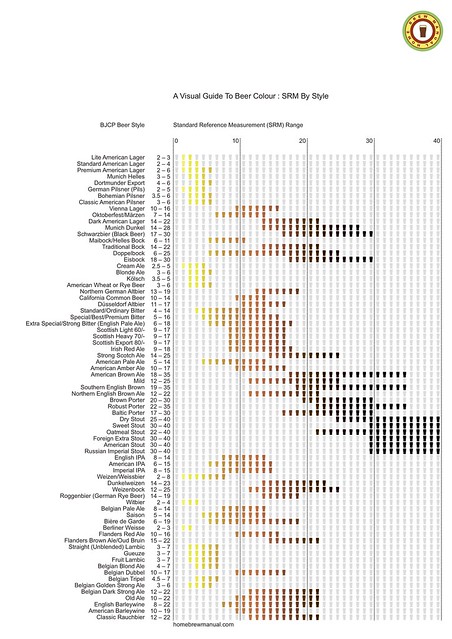 Today’s infographic is another chart of beer colors, this one from Mash Sparge Boil. 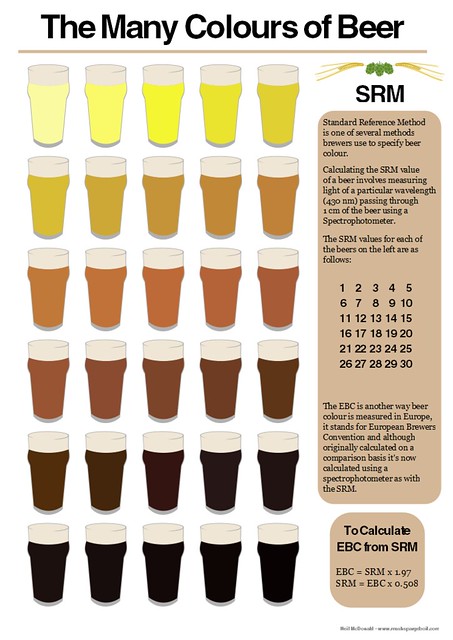 One of the great things about beer is the many colors that beer can have, though it’s a more limited rainbow. Beer color tends to be in the “fall” family of colors, ranging from yellow to amber, orange, brown and finally black. A Japanese brewery on the island of Hokkaido is trying to change the beer color rainbow to more closely match the more familiar ROYGBIV color spectrum. I’m not sure that’s an entirely welcome idea, but here’s what the Abashiri Brewery is up to:

Summer flowers image of Hokkaido “Hamanasu” the brightness of “Ruby Red” was able to express clear and shining brightly colored gems such as rubies concept. By use of secondary materials Hamanasu fruit, finished with a tap Hamanasu aroma and fruity flavor. Pour into a glass and there are wildflowers bloom to decorate the jewel-studded coast of Okhotsk in the summer.

This “Hamanasu DRAFT” brew under the technical guidance of the Tokyo University of Agriculture, the thing to use natural materials from the fruits of Okhotsk Hamanasu local representation could Hamanasu aroma and fruity taste. The petals of “Ruby Red” commitment as well, we succeeded in expressing in clear and shining bright red that you use the natural pigment anthocyanin. 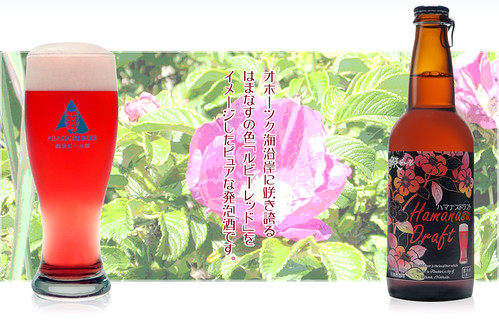 Next up, skipping any yellow, golden, amber or orange beers from the spectrum to reach green.

“Was established as a world heritage, everyone would like to deliver the magnificent nature of Shiretoko” Carefully selected to match the dye-based pigment spirulina, natural shade of green in a clear expression of the Shiretoko the fresh green of spring, As for the unprecedented low-malt beer “smell” the theme is an article created.

As to the third bullet of the Four Seasons series, Hokkaido, sparkling wine become the season of the fresh green “Shiretoko draft” was able to produce. In order to have a scent of this feature, deliberately suppressing the use of hops, by using low-malt beer find a match for this fragrance in a number of aroma components to reproduce the natural feel the rich aroma of Shiretoko for. In addition, in order to close the shade and majestic scenery of Shiretoko, from the natural pigment various “Draft ice” used “Spirulina,” By using natural pigments in three, including the depth and clarity than succeeded in expressing in conjunction with the mystic hue. 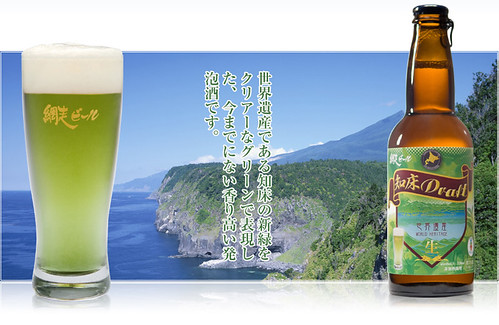 Can anybody say “Saint Patrick’s Day?” Now onto the blues.

Okhotsk Sea ice image of a sky blue “Okhotsk” light and refreshing finish to the faucet has a rich brewing water used to the concept of drift ice in the Sea of Okhotsk. It is developed under technical guidance of Biology, Faculty of Tokyo University of Agriculture and Industry, and granular foam by bubbling pure bright blue sea of Okhotsk ever, causes the image of floating on the sea ice in the slightly blue.

Pour into a glass and there are romantic wider Sea of Okhotsk in winter. The article has created feelings of pride in our plant material to stick to local produce. DRAFT Niatari ice brew, wanted to express in a bubble floating in the sea ice.

I was looking for there for a good foaming, Shima Hisashi professor of Tokyo University of Agriculture, has proposed the use of yam. The Chinese yam, including components that improve the bubbling has been demonstrated in Shima Hisashi’s research.

The commitment also blue Okhotsk, spirulina is said to be the plant’s oldest (and ingredients that many are taking a healthy food), using trial and error many times, the color of the bright sea in clear to reproduce successfully.

Though it’s not stated here, the blue color comes from the addition of seaweed in the beer.

Okhotsk Blue Draft stands out for its cool color and interesting (yet not off-putting) ingredients. The brew is made using water melted from icebergs that float each year onto Hokkaido beaches from the chilly Sea of Okhotsk, an arm of the North Pacific ocean bordered by Japan and Russia.

Then Abashiri went one step further and used seaweed to give their brew and icy blue tint. Perhaps not the greatest selling point but it does make Okhotsk Blue look, well, different. As for the taste… reports state that Ryuho isn’t at all bad as beers go, and if you didn’t know there was seaweed in it, you likely wouldn’t guess there was. 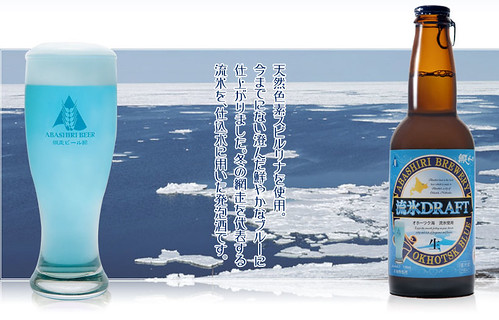 So if those weren’t weird enough, here’s the final one, a pink beer made with potatoes.

The series culminates in Abashiri seasons, the fall harvest is the land of the north Okhotsk. Representation of low-malt beer purple potatoes colorful petals bloom on the ground of the North “draft Potato” When I die pretty flowers that come autumn harvest, the potatoes using the “Fall of Okhotsk,” guests feel the dish.

The fourth season series, “Autumn Harvest” Okhotsk from the Omoi want to express that began with the material sticking to it. Met there is “newly harvested potatoes” and “specialty Abashiri” Silvervine passion fruit called the North was. Abashiri produced by massive potato flavor and ripe “Silvervine” finished in a faucet has been moderately fruity fermented by Yoshiyasu matches. 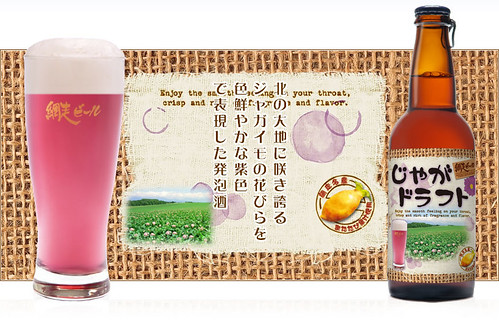 Be afraid. be very afraid.