Several times I’ve seen the anti-alcohol wingnuts claim that alcohol is the most addictive substance on the planet, typing that as they sip their morning coffee and dip their doughnut into it. I’m pretty sure worldwide, and certainly in this country, many more people are addicted to caffeine and sugar than alcohol.

A few years ago, Starbucks tested selling beer in the evenings at one of their locations in Seattle. It must have went well, because they quietly expanded the test to 26 Starbucks locations, and then 40. Recently, however, they announced via Bloomberg and the USA Today that Starbucks would expand what they call “Evenings Stores” to many more locations. No exact figure has been released, but there are over 20,000 Starbucks worldwide, with around 11,500 (or 13,000, depending on the source) in the U.S., and so far they’ll only be adding “Evening Stores” in America, selling only beer and wine, not spirits.

You have to figure most sales of caffeine are in the morning or earlier in the day, at least, when people need that pick-me-up. As the sun moves farther west toward its daily sunset, less and less people want caffeine, for the obvious reason that it will keep them up at night. There are, of course, people who work different shifts and who therefore will be exceptions, but by and large caffeine — coffee and tea — is a daytime drink. So it makes sense that when sales inevitably and predictably fall at night that Starbucks, any company really, would be looking for something to keep sales flowing when their core product ebbs. They already have a comfortable infrastructure where people come and sit for hours, so why not extend that at night, with beer or wine instead of coffee or tea? 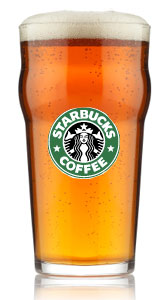 But, not surprisingly, delight over the prospect of Starbucks selling beer and wine is not universal. The Sheriff of Notinmyworld, Alcohol Justice, as usual thinks anything they don’t like is a “bad idea.” They tweeted as much, saying “Bad idea Starbucks,” along with a link to an opinion piece in the Washington Post by Greg Williams, “who has been in recovery from alcohol and drug use for more than 12 years.” Williams is also a filmmaker, and is promoting his documentary film The Anonymous People which appears to be at least in part about traditional recovery stories, i.e. ones using the 12-step or AA model. As I’ve written numerous times, that’s the sacrosanct abstinence method that most Americans, and most of the medical community who makes money off of addicts, believe is the only way to treat addiction, despite a mountain of evidence to the contrary.

So what is Williams’ problem with Starbucks selling beer and wine? It’s all in the headline. By serving alcohol, Starbucks risks losing key customers: people in recovery. Yup, you read that right. If a coffee shop sells alcohol, then alcoholics and other addicts won’t be able to go there. Because nothing signals recovery better than the inability to be in the same building as alcohol. Never mind that alcohol is sold, in most of the civilized world, in grocery stores, convenience stores, gas stations, virtually every restaurant, sports venue, and countless other places. Whew, that’s a long list of places that people in recovery can’t go. I guess they might as well move to an Islamic country or some other place where alcohol is illegal to be really sure.

Every day, people in recovery meet up in Starbucks cafes to support one another, to talk to their 12-step sponsors and, most of all, to be welcomed in one of the few lively, popular, alcohol-free gathering places in their community.

I understand that they might be afraid of backsliding and ordering a beer if it’s offered on the menu, but alcohol is available to adults in countless other places, and yet most AA members have somehow managed to safely navigate the world. I certainly haven’t heard of there not being enough safe places for them to go before now. But even in an alcohol-friendly venue, in a meeting setting, with their support network in place to help them, that really shouldn’t be an issue, should it? Not to mention, in my view, you’re not really anywhere close to a cure if you can’t sit in a coffee shop and not order something you shouldn’t, especially when you’ll face the same issue in every restaurant, grocery store, etc. you set foot in. But with the next sentence it turns weirder.

Starbucks should pay special attention to them.

Huh?!? Why? That reminds me of those annoying “Baby On Board” signs suggesting that I have to drive extra careful when I’m near a car with a baby in it. We all live in the same world. Either figure out how to survive in it, or get the hell out. We all have the same responsibility to one another as a member of society. People who can’t handle themselves should not be entitled to special treatment. The world doesn’t owe you “special attention” because you’re incapable of acting responsibly, usually of your own making.

I know that sounds cold or callous, but it’s not meant to. I’ve known plenty of alcoholics and addicts in my life. But you can’t let them determine how you act, or how society as a whole acts, without making society a different and altogether worse place. I’m sorry you’re struggling with your own demons, but making me act differently whenever you’re around is dragging me, and everybody else, down with you. You have to stand up, on your own terms, and without our having to bend down to meet you. Otherwise, it’s not really a cure, is it?

Williams notes that the journal Alcoholism: Clinical and Experimental Research “found that 88.5 percent of those studied who were in recovery from alcoholism drank coffee. Thirty-three percent of those coffee drinkers drank more than four cups a day.” (I can’t help but see that as a sign that AA members are trading in one addiction for a more socially acceptable one, but that’s another story.) Based on that factoid, he’s extrapolated that to mean that many of Starbucks’ patrons must be alcoholics, too. Maybe some are, but then again, perhaps not. There’s no causation shown by the statistic in the study and the fact that Starbucks sells coffee. Williams, in concluding, suggests that if “executives studied this market demographic, perhaps they would think twice about this move.”

Hmm, let’s see. “Starbucks is the largest coffeehouse company in the world, with 20,891 stores in 64 countries, including 13,279 in the United States, 1,324 in Canada, 989 in Japan, 851 in China and 806 in the United Kingdom.” Their revenue was nearly $15 billion, with a “b,” last year, and they had a net income of $8.8 million and assets totally more than $11.5 billion. But he thinks Starbucks didn’t analyze their demographics before making this decision? They tested the concept for four years, in different metropolitan markets, before announcing they were planning on rolling it out to more locations, and would do so slowly over the next several years. But he thinks they acted rashly, without thinking it through?

Industry analysts, such as Mintel and Beverage Daily, seem to think the move will be a good one for Starbucks, especially if they focus on local craft brands, as current rumors suggest they will. Alcohol Justice and Williams’ “people in recovery” may now have to buy their coffee elsewhere, but I’ll be very surprised if enough to make a dent in the coffee giant’s marketshare actually do stop buying at Starbucks. 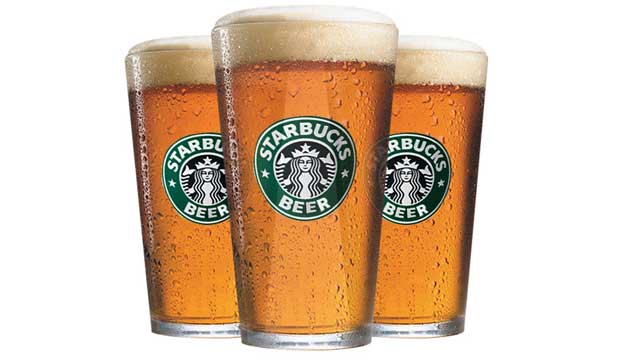 Today’s infographic is entitled Coffee vs. Beer, and was created by On.Q Marketing. Last month, I came upon a similar article discussing which One Better Enhances Creativity. Hint: it’s beer!

Lifehacker had an interesting piece on whether caffeine or alcohol was better to help someone “be more creative and get work done.” The title, Drink Beer for Big Ideas, Coffee to Get Them Done, sort of gives it away, but it’s worth a read to see how author Mikael Cho comes to that conclusion.