Monday’s ad is for Budweiser, from 1914, No. 5 in another series they did in 1914-15 called the “National Heroes Series.” The fifth one features Leif Ericsson, who “was an Icelandic explorer considered by some as the first European to land in North America (excluding Greenland), before Christopher Columbus. According to the Sagas of Icelanders, he established a Norse settlement at Vinland, tentatively identified with the Norse L’Anse aux Meadows on the northern tip of Newfoundland in modern-day Canada.

Leif was the son of Erik the Red, the founder of the first Norse settlement in Greenland and of Þjóðhildur (anglicized Thjodhild). He was likely born in Iceland, and grew up in the family estate Brattahlíð in the Eastern Settlement in Greenland. Leif had two known sons: Thorgils, born to noblewoman Thorgunna in the Hebrides; and Thorkell, who succeeded him as chieftain of the Greenland settlement.” 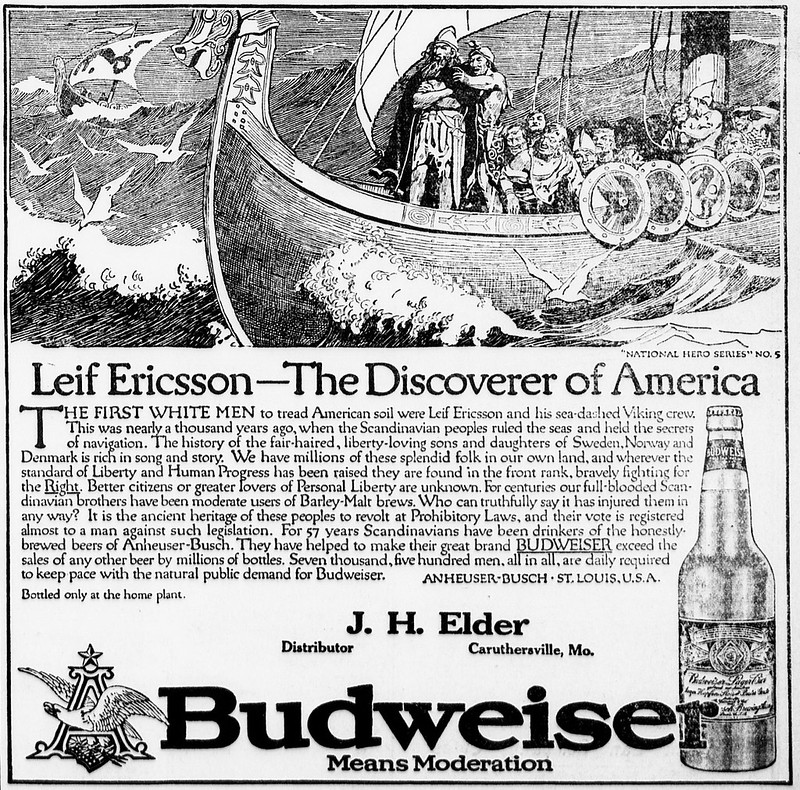 Today’s infographic is entitled Happy Beer Day Iceland and although Beer Day in Iceland is actually March 1, today in 2006, the first microbrewery there opened. Created by Weemss, it’s mostly a history of beer, and (humorously) they misspelled Guinness.

Today in 1944, Iceland gained their Independence from Denmark. Prohibition: 1915 to 1922, then partially lifted until 1935 in Iceland (though beer was still prohibited until 1989) / See Wikipedia: Prohibition in Iceland