You are here: Home / Beers / The 8 Kinds Of Drunks

There are a bewildering number of words to describe that someone has been drinking a bit to much. I’ve collected over 3,000 slang terms, or Drunk Words. There are modern terms, of course, and slang from almost every age of man. Even Ben Franklin had his own list. Another literary take on over-indulging came from Thomas Nashe, who “was a playwright, poet, and satirist. He is best known for his novel The Unfortunate Traveller.” He lived from 1567 until around 1601, and was also “considered the greatest of the English Elizabethan pamphleteers.” One of his pamphlets was entitled the Pierce Penniless, His Suppliction to the Devil, published in 1592. “It was among the most popular of the Elizabethan pamphlets.”

It is written from the point of view of Pierce, a man who has not met with good fortune, who now bitterly complains of the world’s wickedness, and addresses his complaints to the devil. At times the identity of Pierce seems to conflate with Nashe’s own. But Nashe also portrays Pierce as something of an arrogant and prodigal fool. The story is told in a style that is complex, witty, fulminating, extemporaneous, digressive, anecdotal, filled with wicked descriptions, and peppered with newly minted words and Latin phrases. The satire can be mocking and bitingly sharp, and at times Nashe’s style seems to relish its own obscurity. 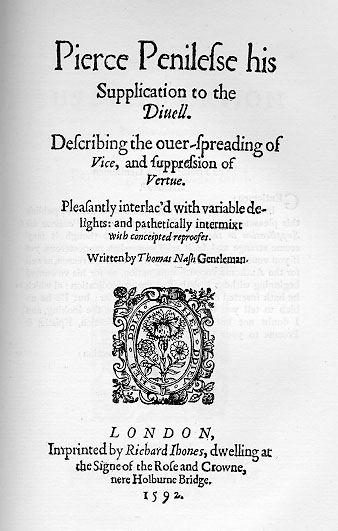 And this is the sort of introduction of the list, that paragraphs that precede it.

King Edgar, because his subjects should not offend in swilling, and bibbing, as they did, caused certaine iron cups to be chayned to everie fountaine and wells fide, and at euery Vintner’s doore, with iron pins in them, to stint euery man how much he should drinke; and he that went beyond one of those pins forfeited a penny for euery draught. And, if stories were well searcht, I belieue hoopes in quart pots were inuented to that ende, that eury man should take his hoope, and no more. I haue heard it justified for a truth by great personages, that the olde Marquesse of Pisana (who yet liues) drinkes not once in feauen years; and I haue read of one Andron of Argos, that was so sildome thirstie, that hee trauailed ouer the hot, burning sands of Lybia, and neuer dranke. Then, why should our colde Clime bring forth such fierie throats? Are we more thivstie than Spaine and Italy, where the sunnes force is doubled? The Germaines and lowe Dutch, me thinkes, should bee continually kept moyst with the foggie ayre and stincking mystes that aryse out of theyr fennie soyle; but as their countrey is ouer-flowed with water, so are their heads alwayes ouer-flowen with wine, and in their bellyes they haue standing quag-myres and bogs of English beere.

One of their breede it was that writ the booke, De Arte Bibendi, a worshipfull treatise, fitte for none but Silenus and his asse to set forth : besides that volume, wee haue generall rules and injunctions, as good as printed precepts, or statutes set downe by Acte of Parliament, that goe from drunkard to drunkard; as still to keepe your first man, not to leaue anie flockes in the bottonie of the cup, to knock the glasse on your thumbe when you haue done, to haue some shooing home to pul on your wine, as a rasher of the coles, or a redde herring, to stirre it about with a candle’s ende to make it taste better, and not to hold your peace whiles the pot is stirring.

Nor haue we one or two kinde of drunkards onely, but eight kindes.

THE EIGHT KINDES OF DRUNKENNES

Below are the eight types of drunks, as articulated by Nashe, along with commentary by the staff of Merriam-Webster.

So what do you think of his list. It’s over 400 years old, but still seems to hold some universal truth. Although perhaps a more modern list might look a little different. We may have to look into that.