You are here: Home / Breweries / The Beer Tourism Index

Undoubtedly beer tourism is growing phenomenon, and has been for some time. Fifteen years ago, when I was GM of the Celebrator Beer News, the “Hopspots” sections were the most popular in the brewspaper, as many readers reported that they always kept one in their car when they travelled to help them find a beer spot (remember that was before smartphones and GPS were ubiquitous). I know for at least thirty years I’ve been including beer destinations any time I travel, even before I did so as part of my profession. Having that information at your fingertips through apps, websites and GPS has only helped to increase beer travel, I think, and at least part of the success of beer weeks has to do with the goal of bringing tourism to specific geographic areas; essentially making the week the destination rather than a side trip. So it’s interesting to see that a popular travel website, Travelocity, is not only recognizing how beer people travel, but has created a Beer Tourism Index to rank the Top Beer Destinations, dividing them by large and small metro areas (though I’m surprised they consider Santa Rosa-Petaluma, Lancaster PA and a few others as “large”). Also somewhat curious is the total absence of the San Francisco Bay Area, or even San Francisco or Oakland/East Bay in the listings. What’s especially odd about that is that San Francisco is one of the top tourist destination cities (it’s number two according to EscapeHere and #5 according to TripAdvisor and #3 via Business Insider). At any rate, according to their press release.

By examining the location of all breweries in the U.S. and looking at other factors important to a successful “beercation,” including the availability of rideshare services, accessibility via air, and the average cost of lodging, this index identified the best large and small metro areas to sample some of the nation’s best craft beers. 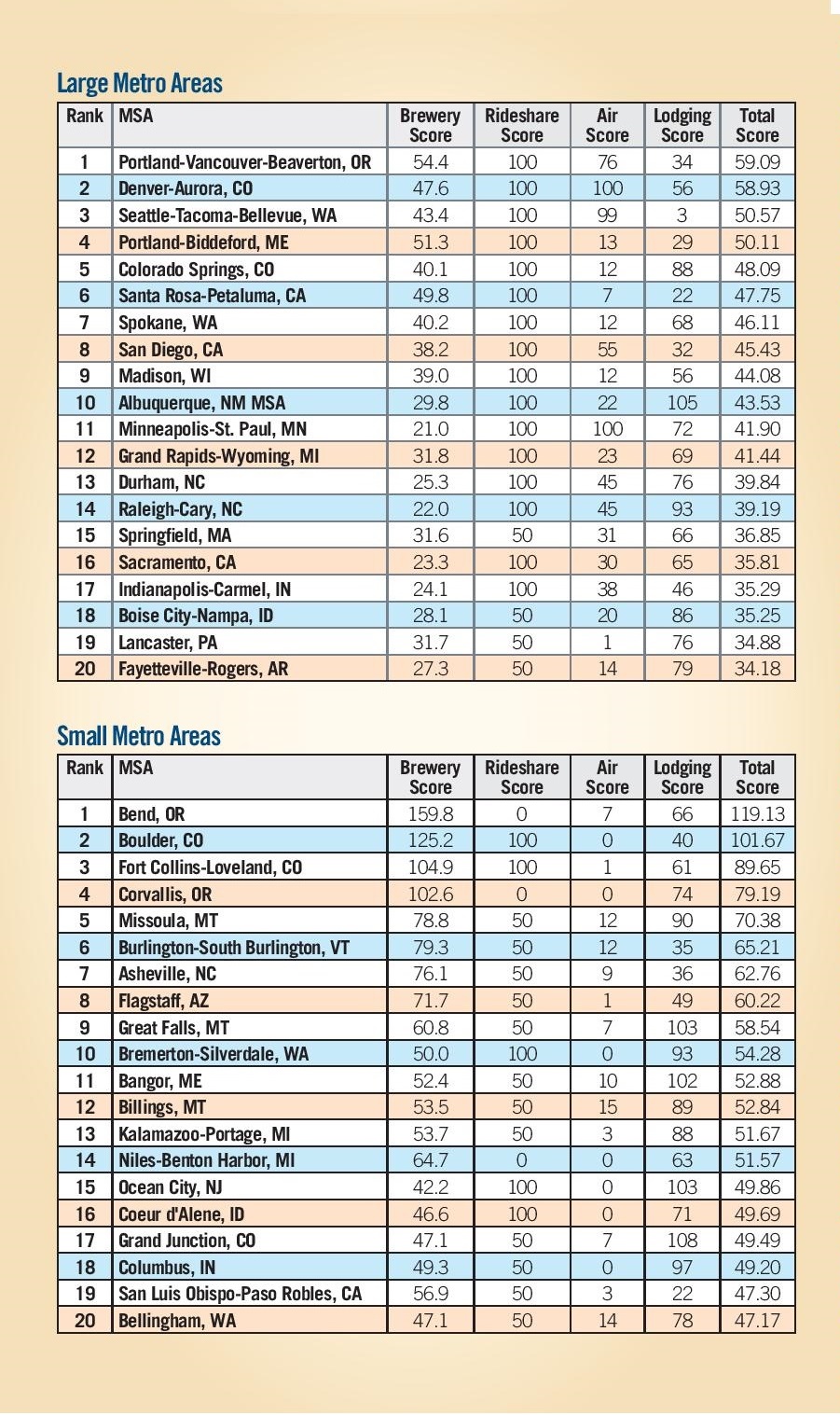 And here’s the criteria used to arrive at this list:

*To find the top metropolitan areas for beer tourism, Travelocity scored the over 300 US MSAs (Metropolitan Statistical Areas) on four factors:

Beer tourism is a big deal. We estimate that in 2014, more than 10 million people toured small and independent craft breweries. That’s a lot of brewery tours. Just search “beercations” and you’ll get a plethora of results on where to tour local breweries.

More than 7 percent of craft sales (by volume) now happen at the source—the brewery. Craft brewers are now a main attraction for travelers. For example, in 2015, the Brewers Association’s three-day Great American Beer Festival generated the equivalent of 2 percent of Denver’s GDP, accounting for $28.6 million. Beer tourism is so strong that travel website Travelocity just published a beer tourism index.

In a Travelocity survey of 1,003 people, more than three-quarters said they would like to go on a trip where they visited craft breweries and sampled local beer. With numerous beer trails flourishing across the U.S. and beer events including festivals and special beer releases racking up millions upon millions of tourism trips and dollars, the modern beercation is a boon to beer.

The Brewers Association commissioned a Nielsen Omnibus panel in June 2016 that asked, “How many, if any, craft breweries have you visited at their site in the past 12 months while traveling?” The answer: on average 2.1 breweries. Impressive.