You are here: Home / Breweries / You Think We Have A Lot Of Breweries?

There’s been a fair amount of talk lately about the number of U.S. breweries hitting a milestone number, and that there are now more breweries in America that at anytime in our history. And that’s great and all, but as Jeff Alworth recently suggested, we should Quit Counting Breweries. And although he meant as the only way to measure growth and improvement in the state of beer, it’s a fair point, although it does, I believe, offer some idea of the bigger picture. Plus, I think we’re all just a little bit fascinated with numbers — things we can quantify — so I doubt anyone will ditch the metric of number of breweries anytime soon.

But if you think we have a lot of breweries, Europe is even more on fire. Sure, they had a head start, and didn’t have that pesky prohibition to slow them down (except in a few places). And while they may have been slower to the movement, or whatever it should be called, of new, usually smaller, breweries opening it’s well and truly now a global phenomenon. As of 2015, according to The Brewers of Europe Beer Statistics, there are over 7,000 breweries in Europe.

The comparison to the U.S. number is helped along by the fact that they’re pretty close in area: 3.931 million square miles for Europe and the U.S. with 3.806 million square miles. Though in terms of people, Europe has more than twice the population of America, 742.5 million vs. 318.9 million in the U.S. But here’s the number of breweries in Europe, broken down by country. 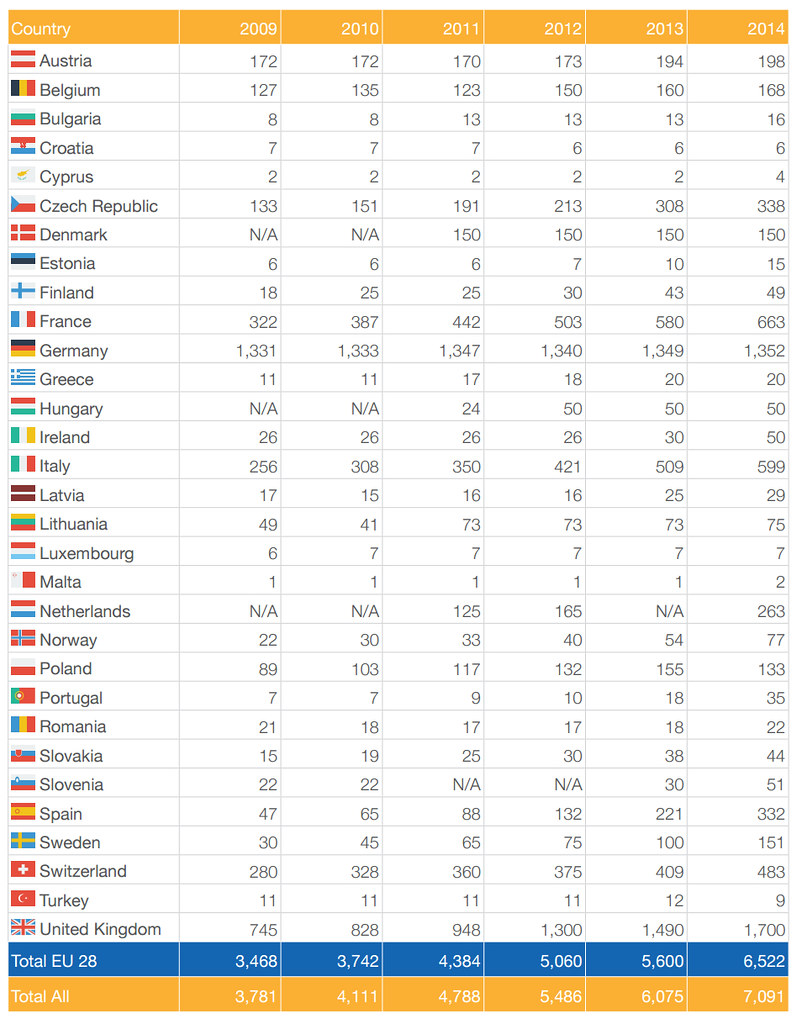 Most of the countries have seen big growth, although a few are close to static, meaning they either stayed exactly the same or have shown only modest growth. Very few have dropped below their 2009 number. Really, it’s only Turkey although Poland was rising steadily, only to dip a little in 2014 over 2013.

Last week, Ron Pattinson at Shut Up About Barclay Perkins looked at this data (h/t to him for bringing it to my attention) and noticed a few other patterns.

The one exception? Germany. The number of breweries hasn’t changed significantly in the last few years. Which has left it lagging far behind. For the first time since the 19th century, it doesn’t have the most breweries in Europe. The UK caught up in 2012 and has since powered ahead. If you’d told me 10 years ago that there would be over 1,500 breweries in the UK, I’d have felt your bumps.

The effect has been to drastically reduce Germany’s share of the breweries in Europe. From over a third in 2009 it fell to less than a quarter in 2014. While the UK’s share has risen for just under 20% to almost 25%.

Paricularly striking is the growth in countries that aren’t traditionally beer drinking. In Italy, France and Greece the number of breweries doubled. While in Portugal the increase is fivefold. In Spain almost sevenfold.

Earlier today, Ron posted a new analysis that he put together, assembling another table that showed the changes in the number of European breweries by nation from 1956-2014. He used a dozen sources, plus his own, to compile it. Here’s what he found:

Only four countries had fewer breweries in 2014 than in 1956: Belgium, Denmark, Germany and Luxemburg. For Denmark it’s a tiny difference – just five breweries – and Luxemburg is an odd case, being so small. Which leaves just Belgium and Germany, both of which have about a third of the breweries they did 60 years ago. I have to admit, it makes the situation in Germany look much worse than the 2009 to 2014 figures. 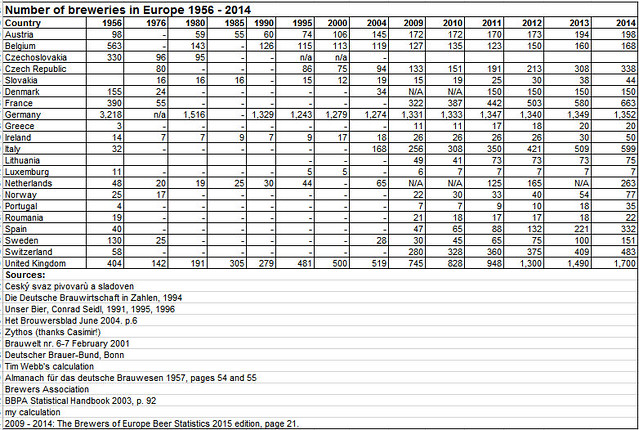 I can’t help but come back to the population vs. brewery number ratio. It’s seems that per capita may have to more to do with how many breweries can be supported by a population after all. I’m sure it’s more complicated, of course, with history, culture and other factors playing a role, as well. Looking at the ratios, there’s a European brewery for every 104,710 people whereas in the U.S. there’s a brewery for every 77,171 people. So currently, we’re slightly more concentrated in these terms. Who’s got numbers on the rest of the world?