Between 1951 and 1953, P. Ballantine and Sons Brewing Company, or simply Ballentine Beer, created a series of ads with at least thirteen different writers. They asked each one “How would you put a glass of Ballantine Ale into words?” Each author wrote a page that included reference to their beer, and in most cases not subtly. One of them was Henry Morton Robinson, who was reasonably well known in 1951, when his ad ran.

Today is the birthday of Henry Morton Robinson (September 7, 1898–January 13, 1961), who “was an American novelist, best known for A Skeleton Key to Finnegans Wake written with Joseph Campbell and his 1950 novel The Cardinal, which Time magazine reported was ‘The year’s most popular book, fiction or nonfiction.'” 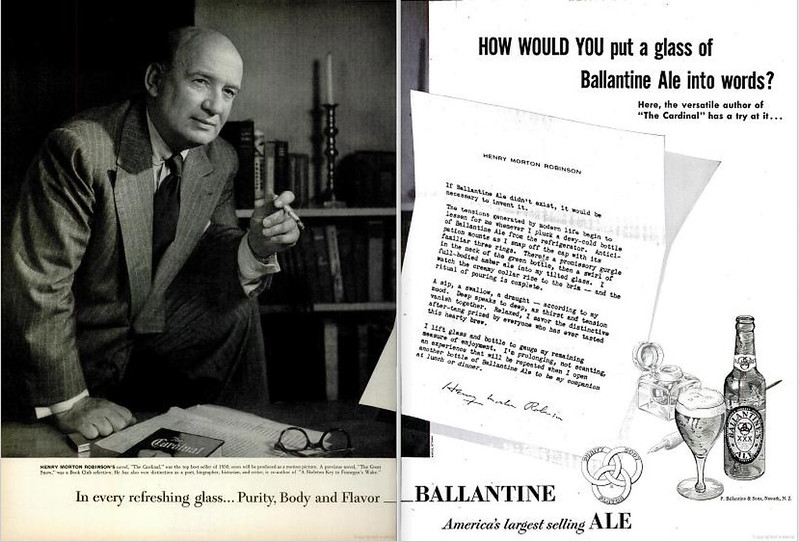 His piece for Ballantine was done in the form of his reminiscences about how Ballantine Ale has helped him relax over the years:

If Ballantine Ale didn’t exist, it would be necessary to invent it.

The tensions generated by modern life begin to lessen for me whenever I pluck a dewy-cold bottle of Ballantine Ale from the refrigerator. Anticipation mounts as I snap off the cap with its familiar three rings. There’s a promissory gurgle in the neck of the green bottle, then a swirl of full-bodied amber ale into my tilted glass. I watch the creamy collar rise to the brim — and the ritual of pouring is complete.

A sip, a swallow, a draught — according to my mood. Deep speaks to deep, as thirst and tension vanish together. Relaxed, I savor the distinctive after-tang prized by everyone who has ever tasted this hefty brew.

I lift glass and bottle to gauge my remaining measure of enjoyment. I’m prolonging, not scanting, an experience that will be repeated when I open another bottle of Ballantine Ale to be my companion at lunch or dinner. 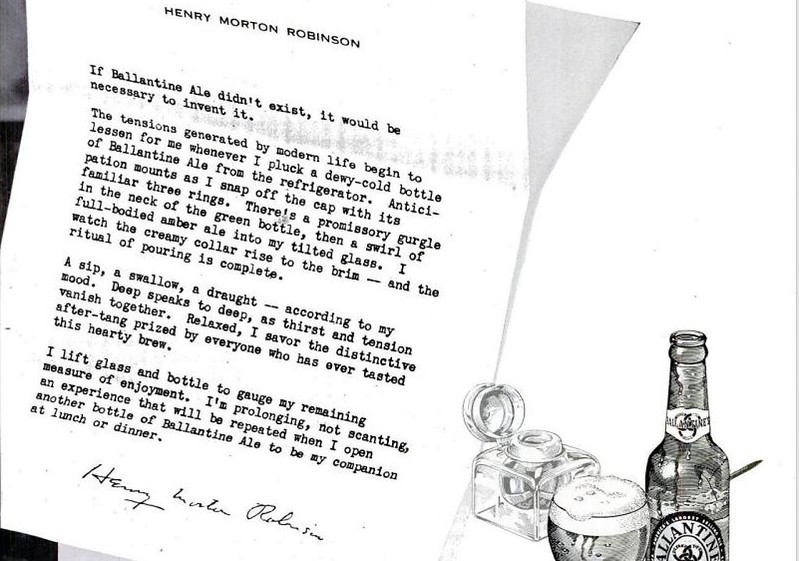