The last time I saw the Tax Foundation look at beer excise taxes was in 2009, but recently they updated their map of Beer Excise Tax Rates by State, for 2014, taking into account several states who changed their rates over that time.

Tax treatment of beer varies widely across the U.S., ranging from a low of $0.02 per gallon in Wyoming to a high of $1.17 per gallon in Tennessee. Check out today’s map below to see where your state lies on the beer tax spectrum.

A few state rates changed since we released last year’s data. Namely, North Carolina’s tax per gallon increased by nine cents, and there were slight increases in Arkansas (+2 cents), Kentucky (+2 cents), and Washington, D.C. (+2 cents). Washington’s tax decreased by 50 cents, and Minnesota’s number was one cent lower than last year. (See the 2013 edition of our Facts & Figures booklet for last year’s numbers.)

There isn’t much consistency on how state and local governments tax beer. This rate can include fixed-rate per volume taxes; wholesale taxes that are usually a percentage of the value of the product; distributor taxes (usually structured as license fees but are usually a percentage of revenues); retail taxes, in which retailers owe an extra percentage of revenues; case or bottle fees (which can vary based on size of container); and additional sales taxes (note that this measure does not include general sales tax, only those in excess of the general rate).

The Beer Institute points out that “taxes are the single most expensive ingredient in beer, costing more than labor and raw materials combined.” They cite an economic analysis that found “if all the taxes levied on the production, distribution, and retailing of beer are added up, they amount to more than 40% of the retail price” (note that this may include general sales tax and federal beer taxes, which are not included in the estimates displayed on the map). Last year, we did a podcast with Lester Jones, Chief Economist at the Beer Institute on tax treatment of beer, which is worth a listen. 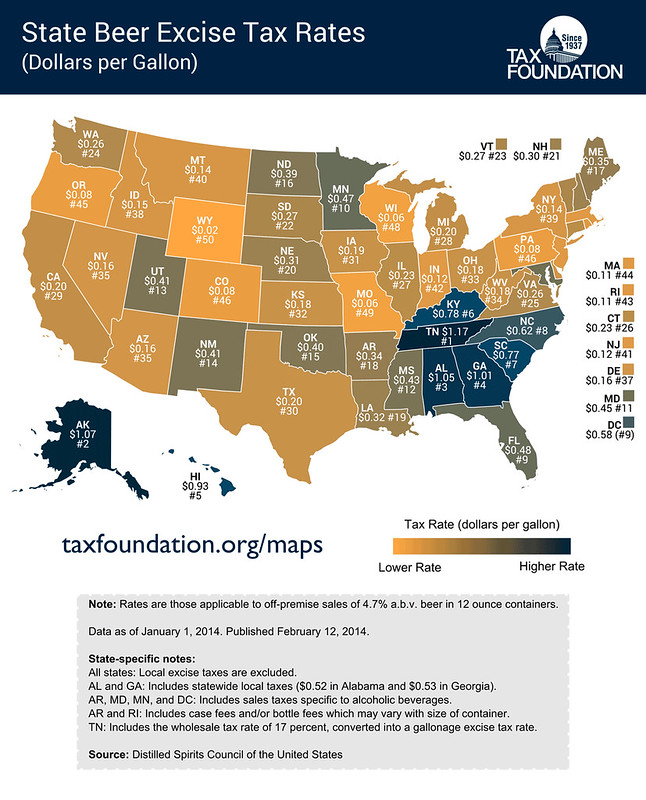