Wednesday’s ad is for Miller Lite, most likely from 1987 or 88. When comedian Joe Piscopo left Saturday Night Live in 1984, after four seasons, he did a few films — I did like Johnny Dangerously — and around 1987 and 1988 did television and print ads for Miller Lite. In this one, the tagline asks “Why ‘Helga’ Piscopo Ex-east German Swimmer Drinks Miller Lite.” The answer, surprisingly, is not because his taste buds were lost as a side effect to steroid use, but “To Keep His Girlish Figure.” Piscopo, in drag, and three similarly attired friends from a bad version of La Cage aux Folles, are drinking Miller Lite and winkingly making fun of it being diet beer. It certainly doesn’t make drinking the beer look terribly attractive so I’m a little unclear how effective it could have been. 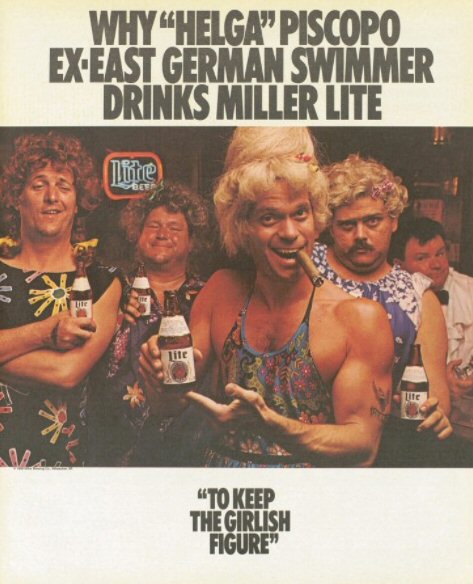