You are here: Home / Just For Fun / Coza Powder, The Cure For Drunkenness

The 19th and early 20th century is filled with accounts of quacks and patent medicines sold by snake oil salesman. All sorts of wild claims were made and almost without exception they were complete bunkum. I just came upon one I hadn’t seen before, something called Coza Powder, from the Coza Institute in London, England. Here’s the ad, from “The Strand Magazine,” published in 1907. I also found examples of the same ad as late as 1909, and even a couple in Spanish, so it appears to have been sold worldwide. 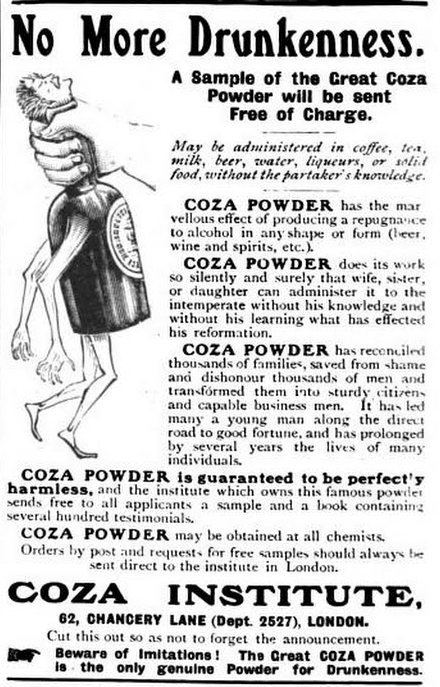 There’s a lot not to like about Coza Powder, but it’s an amazing ad. First, there’s that horrific image of the bottle man being squeezed, then there’s the idea that someone could put it in your drinks without you even being aware of it. That sure sounds like a great idea to promote. They try to sell it by explaining it has “the marvelous effect of producing a repugnance to alcohol in any shape or form.”

And it’s guaranteed to be safe? Of course it is. Thank goodness for that, it hadn’t even occurred to me to wonder until they brought it up. And let’s all beware of imitations, only get genuine Coza powder from the Institute itself, the “only genuine powder for Drunkenness.”

Sounds reasonable, right? Not everybody thought so, even at the time. No less than The British Medical Journal took a look at what was in Coza powder, among other such remedies of the day and in 1909 published their findings in an article entitled “The Composition Of Certain Secret Remedies.” On the page concerning the cure for drunkenness, the first one they examined was Coza powder:

Not surprisingly, the BMJ found that Coza powder was nothing more than bicarbonate of soda, cumin, and cinnamon. And essentially it’s 90% sodium bicarbonate and the remaining 10% is equal parts cumin and cinnamon. They put the cost — in 1909 — at 1/30th of a penny for 30 packages of the powder.

I don’t know if this is relevant, but in Portuguese, “coza” means “bake.”