Today is the birthday of Frederick J. Stegmaier (July 27, 1861-April 23, 1915). He was the son of Charles Stegmaier, who founded the Baer & Stegmaier Brewery with his father-in-law in 1857. It eventually became known as the Stegmaier Brewing Co., and ran it with his sons, Christian, Fred and George. Fred became president when his father passed away in 1906. 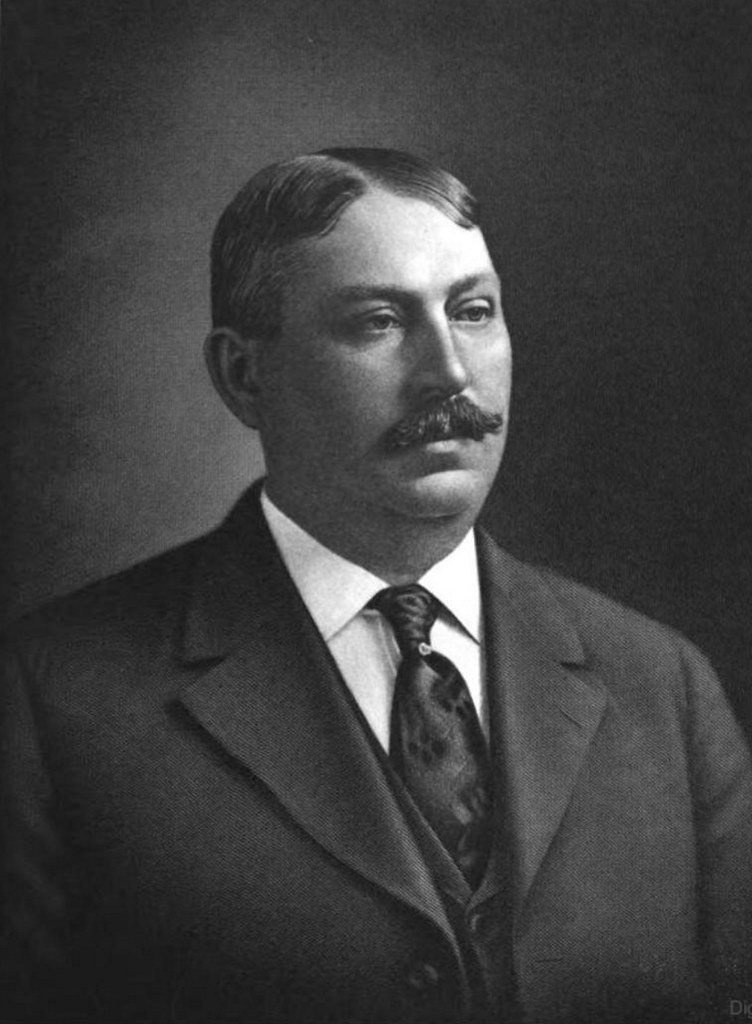 Here’s his obituary, published on Find a Grave: 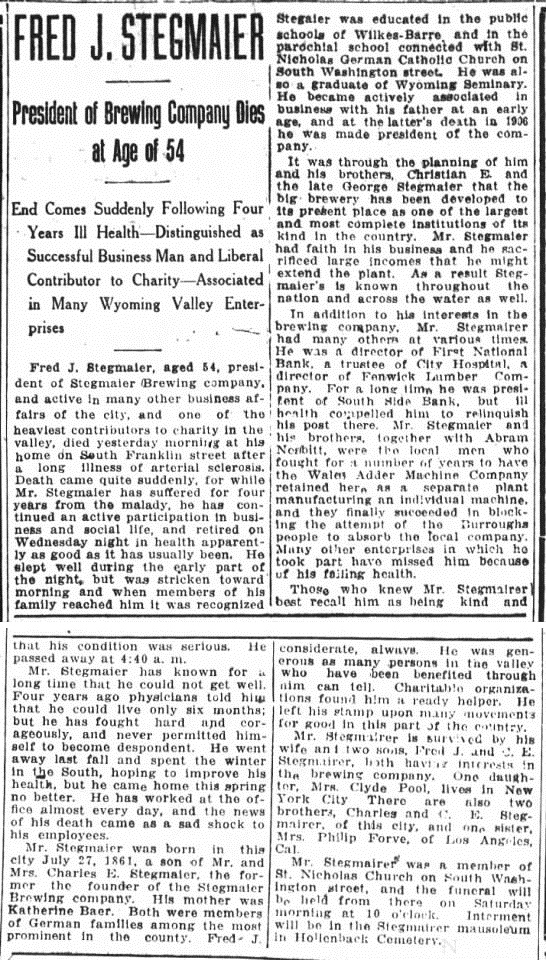 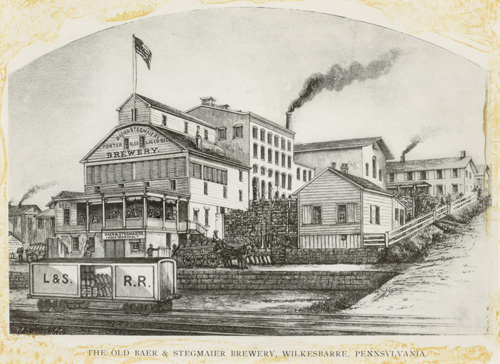 The Stegmaier brewery in 1870.

And here’s another obituary, from the Encyclopedia of Pennsylvania Biography Illustrated, Volume 7:

Frederick J., son of Charles and Kathleen (Baer) Stegmaier, was born in Wilkes-Barre, July 27, 1861, and died at his home on South Franklin street, Wilkes-Barre, Pennsylvania, April 22, 1915. He was educated in the public schools, St. Nicholas Parochial School, and Wyoming Seminary, being a graduate of the last named institution. He then became actively associated with his father in business, and at the death of Charles Stegmaier, the father, Frederick J. Stegmaier succeeded him as president of the Stegmaier Brewing Company. It was through the foresighted planning and energy of the sons of Charles Stegmaier that the business founded by the father was developed until it became one of the largest and best equipped plants of its kind in the country. In addition to his responsibilities as head of the company, Frederick J. Stegmaier had other large and important interests. He was for many years president of the South Side Bank, a position ill health caused him to relinquish. He was a director of the First National Bank, director of the Fenwick Lumber Company, director of the Stegmaier Realty Company, and largely interested with his brothers and Abram Nesbitt in the Wales Adding Machine Company. When the last company was threatened with absorption by rivals, these men fought for a number of years to retain the company as a separate plant manufacturing an independent machine, and finally succeeded. Mr. Stegmaier was interested in many other projects, but failing health during his latter years compelled him to withdraw from active participation in many. For four years he lived under the constant care of his physician and knew that his days were numbered, but he neither lost courage nor became despondent. He passed the last winter of his life in the south, but after his return spent nearly every day in his office, literally “dying in the harness.”

He was kind and considerate, very generous, charitable organizations having in him a liberal friend, and when his will was read it was found that Wilkes-Barre City Hospital, Mercy Hospital, United Charities, Nanticoke Hospital, Wilkes-Barre Home for Friendless Children, the Florence Crittenden Shelter and Day Nursery, and the Ladies’ Aid Society had been generously remembered, as had the Home of the Good Shepherd, St. Patrick’s Orphanage, and St. Patrick’s Foundling Home, of Scranton. During his life he served as a director of the City Hospital, knew its needs, and did his full share there as elsewhere in relieving suffering. He was a member of St. Nicholas Church (Roman Catholic) and was a member of the Benevolent and Protective Order of Elks, who after a solemn high mass of requiem in the church conducted final services at the Stegmaier mausoleum in Hollenback Cemetery. He was also a member of the Franklin Club and the Concordia Singing Society. 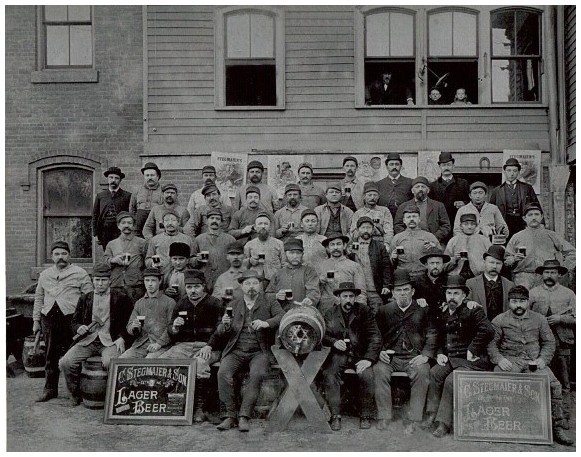 And here’s one more from American Brewers’ Review from 1915: 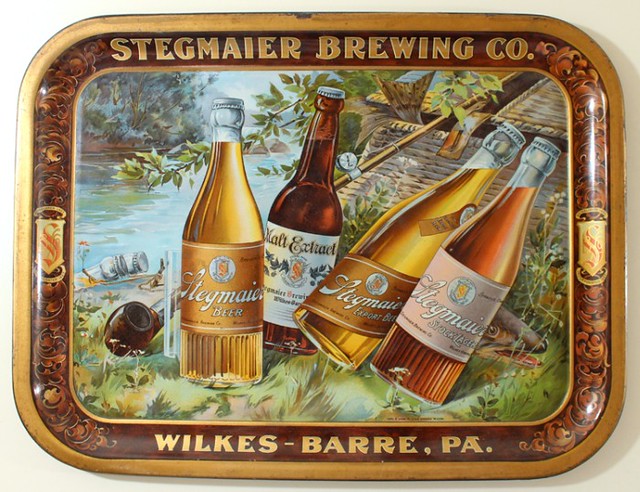 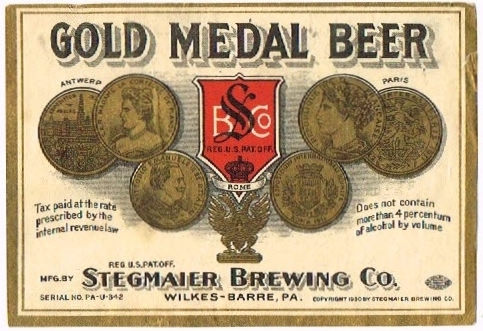