Today is the birthday of Michael Edward Ash (December 17, 1927–April 30, 2016). He “was a British mathematician and brewer. Ash led a team that invented a nitrogenated dispense system for Guinness stout, which evolved to become the beer now sold globally as Draught Guinness. As the manager in charge of the Easy Serve project, Ash is credited as the inventor of nitrogenated beer (sometimes known as “nitro beer” colloquially).” 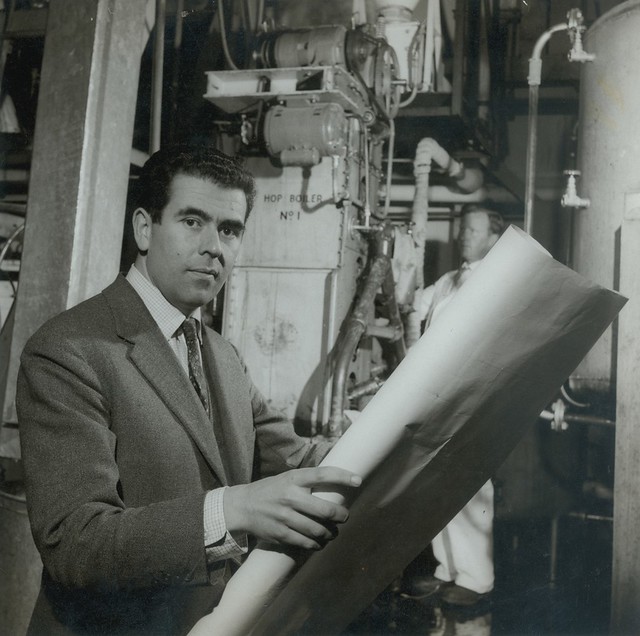 “Following graduation from Cambridge, Ash lectured in mathematics at The Bedford College for women for three years before joining Guinness & Co. at their London Brewery in Park Royal in January 1951.

After training as a brewer by 1954 Ash also had experience of running two departments (Brewing and Forwarding) and in 1955 he was given his own department the ‘Sample Room’, which had facilities for experimentation. The ‘Draught problem’ was given to Ash as part of his briefing from the managing Director, Hugh Beaver. At the time, Guinness used a convoluted draught system in which highly conditioned beer was blended with aged, nearly still beer. It was a slow, arduous process that limited the ability of draught dispense to reach a more global market.

Guinness had for years been looking for a system in which a barman with no special training could pour a glass of draught in a matter of seconds to settle quickly with a head (3/8″ in a normal ½ pint glass).

Ash realized the solution lay in the use of a blend of nitrogen and carbon dioxide (beer typically just uses the latter), but it took years to figure out a mechanism to dispense nitrogenated beer. Inside Guinness, Ash’s quest was regarded as quixotic, and other brewers chided it as “daft Guinness” and the “Ash Can.” Eventually, working with a keg designer, Ash hit on a revolutionary, self-contained two-part keg, with one chamber full of beer and the other full of mixed gas under pressure, and the introduction of nitrogen.[5] Nitrogen is less soluble than carbon dioxide, which allows the beer to be put under high pressure without making it fizzy. The high pressure of dissolved gas is required to enable very small bubbles to be formed by forcing the draught beer through fine holes in a plate in the tap, which causes the characteristic ‘surge’.

Ultimately called the “easy serve system,” it began to replace the old “high and low” taps used in Ireland and spread to Great Britain and beyond beginning in the 1960s. The invention, which made for a smoother, less characterful beer, was not without controversy, and for years a minority of Irish drinkers complained about the change. Eventually, nitrogrenated stout became a standard, not just at Guinness but among all Irish makers of stout.

Ash left the brewing side of Guinness in 1962 to become managing director of Crooks Laboratories in Park Royal (owned by Guinness). Crooks moved to Basingstoke in 1965. At Crooks Ash was responsible for acquiring the licence for the anti-depressant Prothiaden (Dosulepin) in 1967. From 1970 onwards Ash followed various interests including business education and was a founding governor of Templeton College Oxford.” 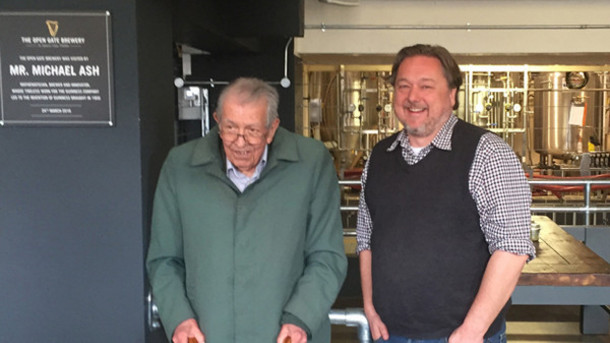 Ash with Pete Brown.
Pete Brown, who’d met Ash recently, wrote his obituary for the Morning Advertiser after he passed away in April of this year at 88 years old, entitled The man who created the nitro stout. 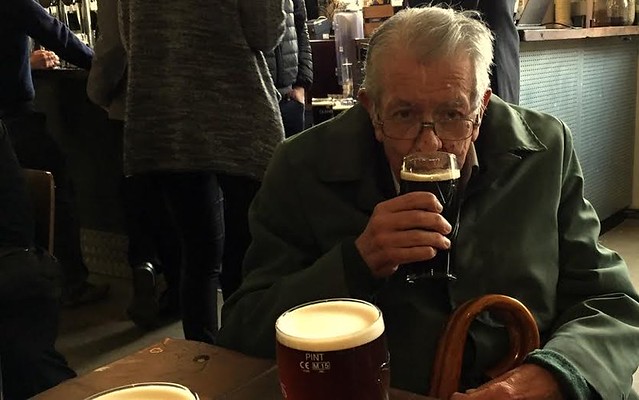 A photograph of Ash taken by Jeff Alworth during his visit to Guinness in early 2016.

Similarly, Jeff Alworth wrote a piece for All About Beer Magazine, The Man Who Invented Nitro the month after he passed away.

And this biography of Ash was prepared by Guinness’ marketing department:

Michael read mathematics at Trinity College, Cambridge and was awarded a triple first in his studies – top scholar that year in Cambridge. Between 1948 – 1950, Michael was allowed to reduce his national service conscription by teaching Maths at a University (other than Oxbridge). He taught at Bedford College. Up to the end of World War Two, the Guinness Company had a policy of recruiting only first class honours science graduates from Oxford or Cambridge. Michael was the first non-brewer to be recruited into Guinness.

It was in this role, he led a team of over 20, and their primary role was to seek to improve the shelf life of bottled Guinness. However, Michael felt that the real prize was in developing a proper system for Draught Guinness and began dedicating his time to the ‘Draught Problem’.

The rise of lagers available on draught, especially in the UK in the 1940s and 1950s, was encroaching on traditional Guinness sales, and Michael felt that there was a great opportunity for Guinness, should the stout be available in Draught format. However, the essential problem was with the gas. Carbon dioxide was used to pressurise kegs of bitter and lager, and it was easy and effective for everyone concerned. Guinness, though was too lively to be draughted with carbon dioxide alone.

Of the 20 plus men on his Sample Room team, he could only afford to assign 2 people to work part-time with him on ‘Daft Guinness’ as it became known with the Park Royal Brewery. Michael talks about working weekends and late nights over a long period of time to eventually come up with a nitrogen gas solution.

He worked hand in hand with Eric Lewis, of Alumasc, who supplied Michael with prototype after protoype of metal kegs with different experimental gas chambers. The fact that nitrogen is an inert gas meant that they bubbles lasted longer and were smaller. The right amount of nitrogen, created the ‘surge’ and allowed for a controlled, creamy head that lasts for the whole pint.

The eventual solution was a ‘mixed gas dispense’ system. Known initially as ‘The Ash Can’, The Easy Serve Cask was a self-contained, two-part keg, with one chamber full of beer and the other full of mixed gas under pressure.

Having seen the possibilities, [the company] was in a hurry to get Draught Guinness out into the market place, and he demanded that it should be launched in 1959 – the year of the Guinness bicentenary. At a board meeting of 9 December 1959 – Viscount Elveden (later 3rd Lord Iveagh) reported that about half the draught Guinness outlets had now been changed to the Easy Serve system, and the changeover of the remainder should take place by mid-January 1960.

Here’s a short video that Guinness made about Michael Ash: