Today is the birthday of Peter Schemm (May 30, 1824-September 13, 1898). Born in Bavaria, Germany, he came first to Baltimore in 1842, and five years later moved to Philadelphia, where he worked at Dithmar & Bretz, brewers. Thereafter, he worked with Louis Bergdoll, and in 1855 partnered with L. Houser to form the brewery Houser & Schemm. After Houser’s death in 1863, it became the Peter Schemm Brewery, and eventually his son came to work with him, and it was renamed the Peter Schemm & Son Brewery, or the Peter Schemm & Son Lager Brewery. 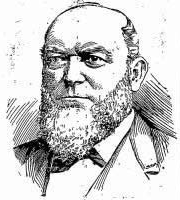 Here’s Schemm’s obituary from the Philadelphia Inquirer, published on September 14, 1898, the day after he sparked worldwide interest by committing suicide by jumping into Niagara Falls.

Peter Schemm, the popular millionaire brewer, a favorite in many societies, father of eight children, band director and art patron, yesterday leaped over a bridge into the rapids above Niagara Falls just below Goat Island in the sight of hundreds of people. His body whirled to destruction, passed over the falls on the American side and may never be recovered.

The Associated Press dispatch from Niagara Falls was the first news to the family at 931 N. 8th Street. They hadn’t heard from him since Monday when he had left to visit the brewery at 25th and Poplar Streets. This worry and search for him began Monday night after he had failed to appear at the Board of Directors meeting of the National Security Bank which he never failed to attend. The family knew from the breaking off of his daily habits that something was wrong. All they could learn from his faithful carriage driver, Clarke, was that he took Mr. Schemm to the Reading Terminal Depot Monday at about 12:00.

“That’s all, you can go home. I’ll trouble you no more,” were the last words said to the driver. He spoke in his accustomed manner as the driver then thought, and disappeared in the depot. Upon his failure to appear among his coterie of friends (each evening he met his friends at Massholders Saloon near the brewery – Plumber School, building Harback, roofer Walh and undertaker Christian Kunaig and others) and his failure to return home at the accustomed hour in the evening where was usually punctual as the clock, an investigation was started and every effort was made to trace him. Telegrams were sent to his son, Peter Schemm, Jr. at Holly Beach and inquiries were made of all his intimate friends in this city. None knew anything. He sometimes had business at Bethlehem, and had interest in the Warwick Iron Co., but all that could be learned was that the driver had left him in the Reading Terminal at noon.

A distressing night and morning for his family and friends ended in the news that he had become the first sensational suicide of the summer at Niagara Falls.

He arrived at Niagara Falls at 11:00 pm the night before and registered at the Central House as Peter Schemm with putting down his address. He inquired for the Steel Arch Bridge and paid 25 cents to be conducted there at night. The following morning he said he was from Philadelphia and hired hackman Hickey to take him for a drive. He was taken all along the rapids and stopped many times to make examinations out of curiosity, the driver thought, but evidently contemplating a place to jump. When they got to the bridge on the route to Goat Island, he got out and sent the driver on across the bridge saying he would walk across to get a better view. In the middle of the bridge a figure was seen climbing up and over, there was a shout from people which caused all faces to turn. The 200 pound form of the gray-bearded 74 year old man was that of Peter Schemm.

A SELF MADE MAN

Peter Schemm was born at Dottenheim near Newstadt-on-the-Aisch, Bavaria, May 30, 1824. Landing at Baltimore in his 18th year, without friends or relatives in this country, he found employment as a farm hand on what was a large farm on Pelair Road on the identical spot now occupied by the Van Der Horst Brewery. After five years of service at Baltimore, he left for Philadelphia, engaging with Dithmar & Bretz, the celebrated Ale and Porter brewers. In 1849, he entered a business relationship with Louis Bergdoll, then being one of the founders of the I. Bergdoll Brewing Co. Retiring the next year to give a place for Mr. Bergdoll’s brother-in-law, the late Charles Booth, Mr. Schemm formed a partnership with George Nanger as Nanger and Schemm at the 2nd and New Streets, a firm well known in its day, and held happy remembrances for many old citizens in Philadelphia. “Der dic-h George” was one of the characters of German society in the days of over 30 years ago. (The Industries of Philadelphia records that Philadelphia was the first place in this country where Lager Beer was made and the original brewer was George Manger who had a brewery about 1846047 on New Street).

After five years of hard work, Mr. Schemm started a saloon on 238 Race St. Still in existence and known for many years as the principal place of resort of the German element of the city. In 1855 he formed partnership with L. Houser as L. Houser & Co. which was renewed after five years as Houser & Schemm continuing until the death of Mr. Houser in 1863 when Mr. Schemm purchased the widow’s interest and was continued ever since under the name of Peter Schemm.

He was a member of the Odd Fellows, Red Men, Seven Wise Men, Masonic and other Orders, and served in some as Grand Master, State Representative and other important positions. He was also a member of the Germany Society Turners Schutzenverein, Saengerbund, etc. He was one of the founders and president of the Philadelphia Lager Beer Brewers Association. He was also one of the founders of the National Security Bank of Franklin & Ferard and was Director of it since 1870. Also founder of the Northern Savings and Trust Co. and the Warwick Iron Company and was a member of the Commerical Exchange of Philadelphia.

You can also find additional obituaries and follow up stories at the Peter Schemm and Fredericka Rosina Schill Family Group. 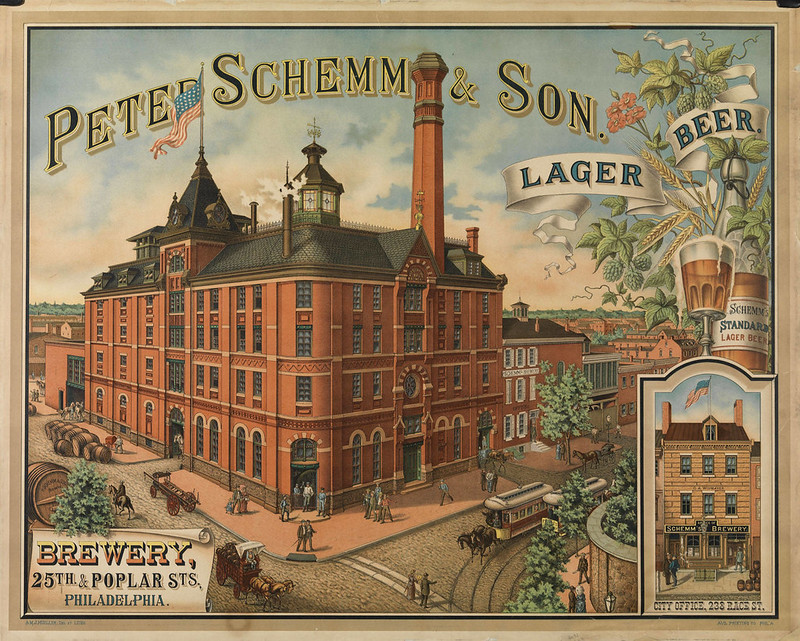 Peter was born at Dottenheim near Newstadt-on-the-Aisch, Bavaria, May 30, 1821, where for generations past, his family had been brewers. Peter grew up in the brewing trade, learning both brewing and coopering, two trades which were generally carried on together. His family was well to do, but he believed that America offered larger opportunity for him. He arrived at the port of Baltimore at the age of 18 in 1839 and found employment as a farm hand on what was a large farm on Pelair Road on the identical spot which was occupied later by the Van Der Horst Brewery. Seven years later in 1846, he left for Philadelphia, engaging as a brewer and cooper with Dithmar & Bretz, the celebrated Ale and Porter brewers. In 1849, he entered a business relationship with Louis Bergdoll, then being one of the founders of the I. Bergdoll Brewing Co. Retiring the next year to give a place for Mr. Bergdoll’s brother-in-law, Charles Booth, Peter formed a partnership with George Nanger as Nanger and Schemm at the 2nd and New Streets, a firm well known in its day, and held happy remembrances for many old citizens in Philadelphia. (The Industries of Philadelphia records that Philadelphia was the first place in this country where Lager Beer was made, and the original brewer was George Manager who had a brewery about 1846-47 on New Street).

After five years of hard work, Peter started a saloon on 238 Race Street, a principal place of resort of the German element of the city. In 1855 he invested his capital in partnership with L. Hauser as L. Hauser & Co. which was renewed after five years as Houser & Schemm continuing until the death of Mr. Houser in 1863 when Mr. Schemm purchased the widow’s interest and continued after that time under the name of Peter Schemm. Hauser had a three-story dwelling on the ground floor and a small two-story building next door in which the beer was made. The total daily capacity at the start was 10 barrels. The dwelling and original brewery were used as different offices and a cooper shop, and other buildings were erected on the corner below. A large brewery was erected in 1885, and in 1886 the capacity of the establishment was doubled again when another building, which took the place of the two small houses in which the business had started, was erected. Peter was satisfied with the proportion of his trade, but the popularity of his beer and the expansion in the number of saloons created a larger retailer demand.

Peter gained a reputation in his time for great integrity regarding his product. He was not at all interested in fancy innovations in brewing or for the extensions that were often proposed by promoters and big brewing combinations. He had strong ideas on the way his beer should be served as well. The temperature could be neither too high nor too low and it had to be served carefully. Retailers guilty of neglects in these regards were denied his products. 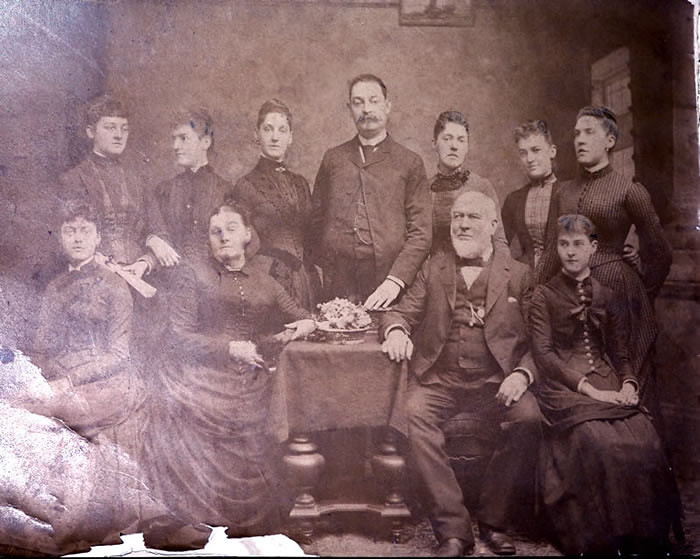 Peter Schemm (with the white beard in the front right). 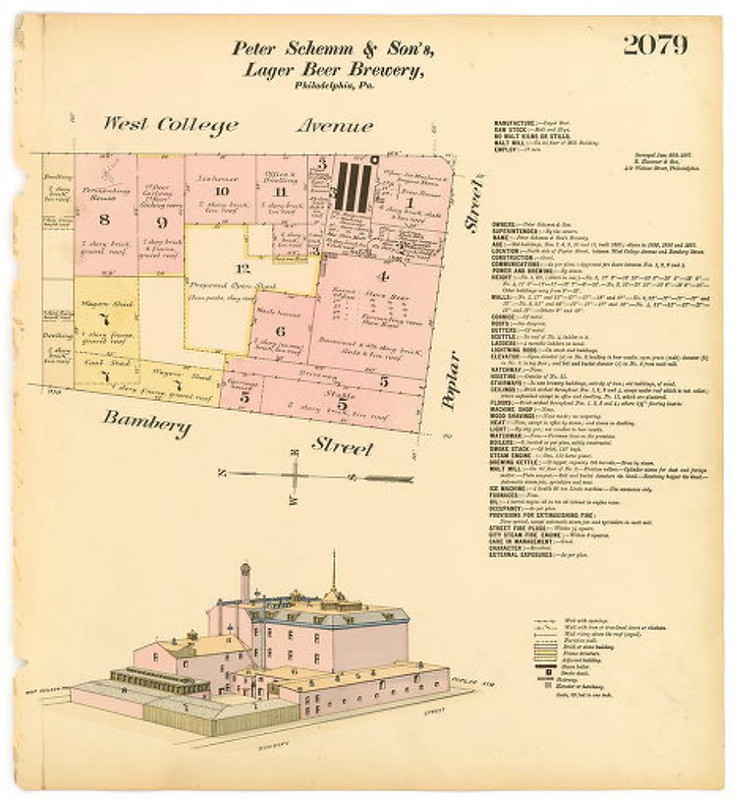 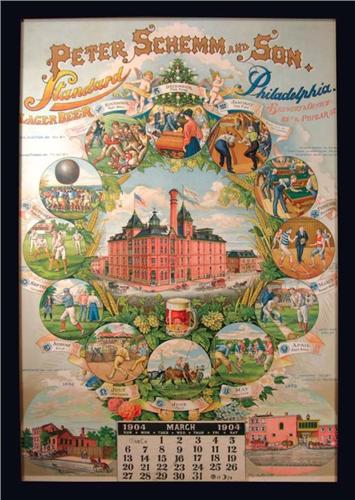