Thanks to declines in sales volume, MillerCoors announced today that they will be closing their brewery in Eden, North Carolina, winding it down over the next year with plans to finally close in September of next year.

Opened in 1978, the Eden facility was the first brewery to produce Miller Genuine Draft back in 1986. Today, it’s a state-of-the-art operation with more than 500 employees and an annual brewing capacity of 9 million barrels. The small, friendly community of Eden lies near Greensboro.

“Today we made the difficult decision to close our brewery in Eden, N.C., in order to optimize our brewery footprint and streamline operations for greater efficiency across our remaining seven breweries,” said Chief Integrated Supply Chain Officer Fernando Palacios.

The decision to close the Eden Brewery was due to significant overlap in distribution between Eden and the Shenandoah, Va., brewery, which is approximately 200 miles away. Eden has been a strong performer over the years. However, Shenandoah is better suited geographically in relation to Northeast markets and is also the newest brewery in MillerCoors network.

The Eden brewery employs approximately 520 employees. In 2014, Eden produced 7.1 million barrels of beer, which were shipped to 280 independently-owned distributors. Brands include Blue Moon seasonals, Coors Light, Miller Lite and Miller High Life. Over the next 12 months, products currently produced in Eden will be transitioned to other breweries, including Shenandoah, Va.; Trenton, Ohio; Fort Worth, Texas; Albany, Ga.; and Milwaukee, Wis.

Since the creation of MillerCoors seven years ago, volume has declined by nearly 10 million barrels. This volume loss is due to a variety of factors, including economic challenges, an explosion of choice and fragmentation within the beer business, and a dramatic change in the way consumers engage with brands. As a result of declining volume, MillerCoors breweries are operating at an increasingly inefficient capacity. While MillerCoors is taking steps to strengthen its overall portfolio to drive long-term growth in volume and share, continued volume declines are expected each of the next few years.

“We take great pride in supporting the communities where we live and work,” Palacios said. “We’ve been proud to be part of the Eden community since we shipped our first products in 1978. We will work with community leaders to make sure we continue to support the community while we are brewing beer in Eden.”

Blue Moon seasonal products will be moving to the Milwaukee brewery, which already produces seasonal varieties for Leinenkugel, said Marty Maloney, a spokesman for MillerCoors. Maloney said each brewery receiving work from Eden will evaluate its own hiring needs, but the shift could add jobs or at least support the existing jobs in Milwaukee.

But decreasing sales — volume has declined by almost 10 million barrels since 2008 and the company expects the trend to continue for the next few years — mean MillerCoors’ breweries are operating inefficiently, and future closures or reductions could be in the big brewer’s future. 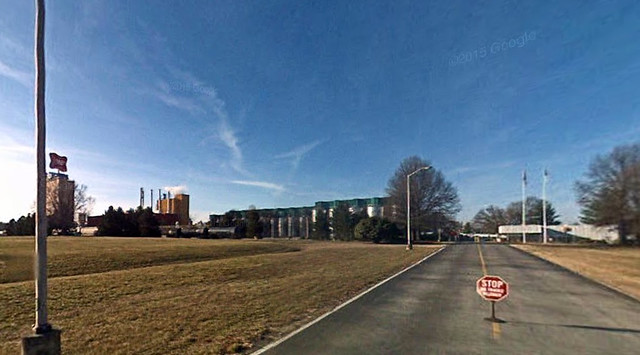 The entrance to the MillerCoors plant in Eden, North Carolina, as close as you can get on Google Maps Street View.