Today in 1948, US Patent 2447122 A was issued, an invention of Emil C. Horst Jr., for his “Hop Picking Machine.” There’s no Abstract, although in the description it includes this summary:

There are two types of hop picking machines in general use at the present time, to wit, a stationary and a portable type. Where stationary machines are used, the hop vines are cut ofi in the fields and loaded on trucks or wagons and hauled into the stationary machine where they are removed and attached to grasper bars which pull the hop vines between revolving drums or traveling belts equipped with V-shaped wire fingers which comb the vines and strip or remove the hops and most of the leaves. The picked hops and leaves are then delivered to separator belts where the leaves and stems and other foreign material are separated from the hops, and clean hop-s are finally obtained.

The portable type of machine operates in substantially the same manner, the principal difference being that the portable machine travels in the fields where the hops grow, and as the machine advances, the hop vines are cut down and attached directly to grasper bars which pull the vines through the machine with the result that the hops and leaves are stripped on and then delivered to separators to finally obtain the clean hops.

From the foregoing, it will be noted that whether a portable or stationary machine is employed, the hop vines must be cut off and attached to grasper bars in order to feed or pull them through the machines where the stripping operation takes place.

The object of the present invention is to provide a new method and machine whereby hops can be picked directly from the vines in the field without the necessity of cutting the vines free from the plant or root from which they grow; to provide a portable machine which straddles and travels along a row of hop vines and as it travels, combs the hop vines in an upward direction thereby more efficiently removing the which can singly and in clusters generally beneath the leaves and arms of the hop Vines; and further, to provide a machine in which grasper bars together with associated mechanism is entirely eliminated and the machine proper very materially simplified, this being accomplished by providing a roller which rolls over the stalk the vine and with sufficient traction to pull the vine downwardly through the combing or picking fingers of the machine as the machine advances. 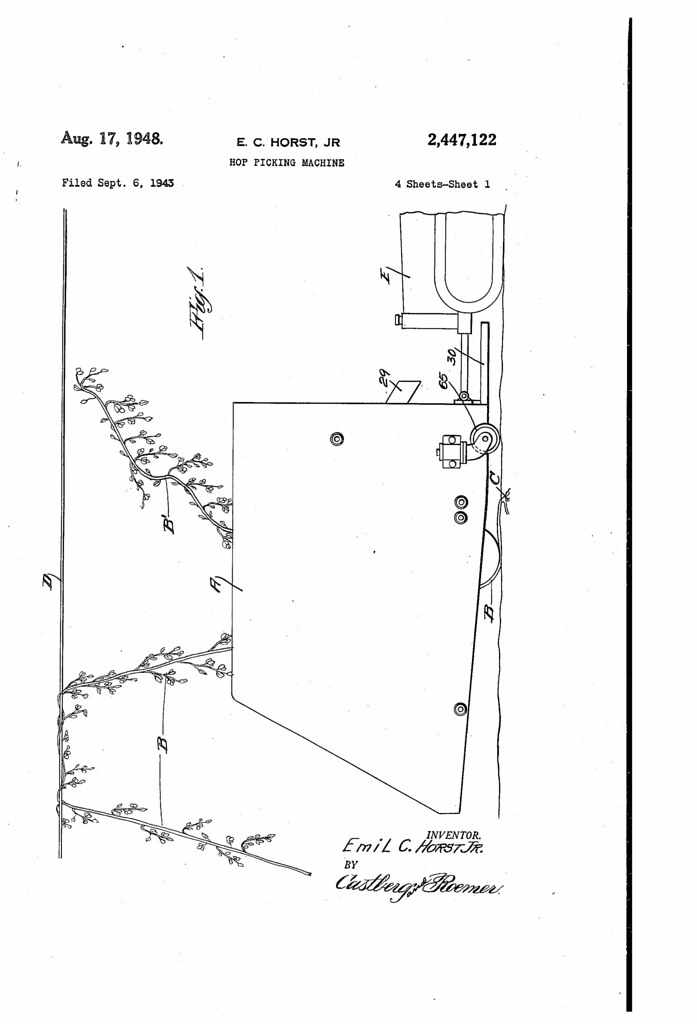 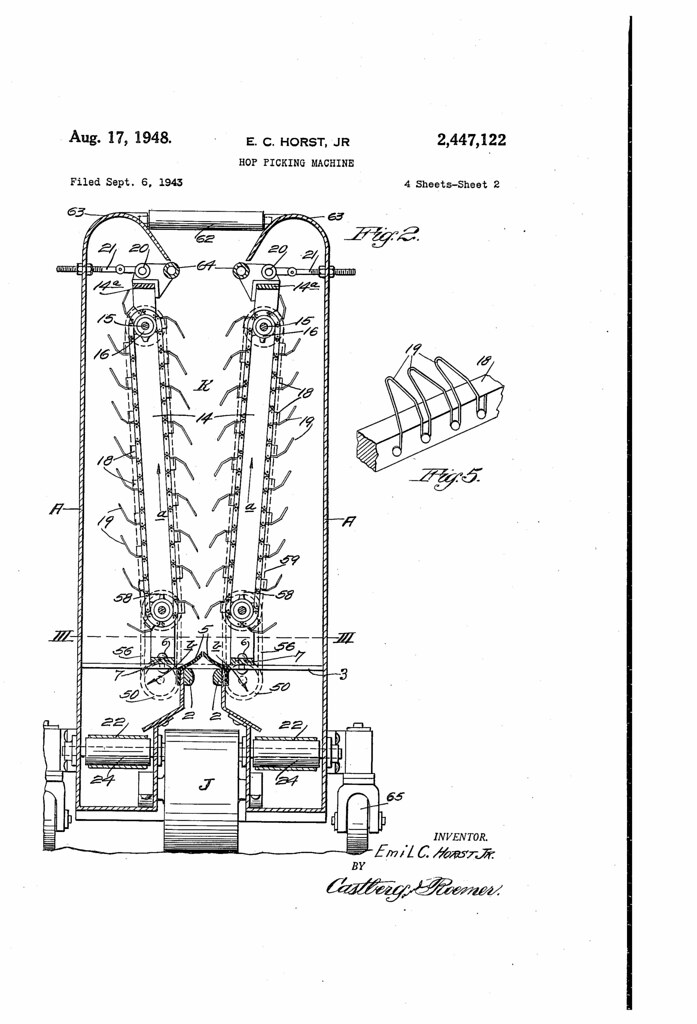 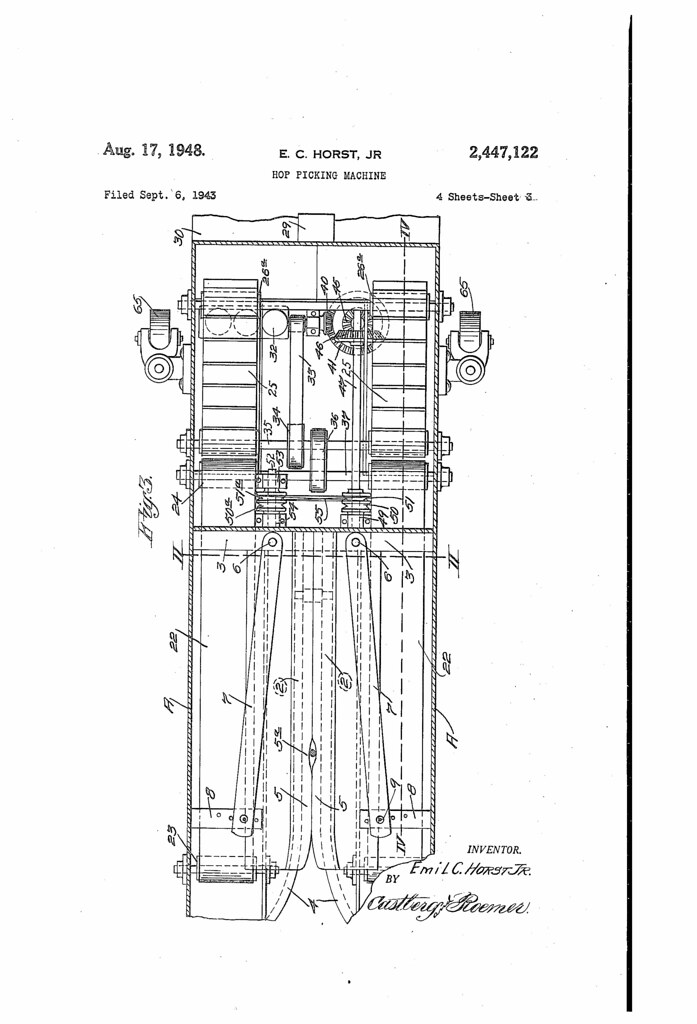 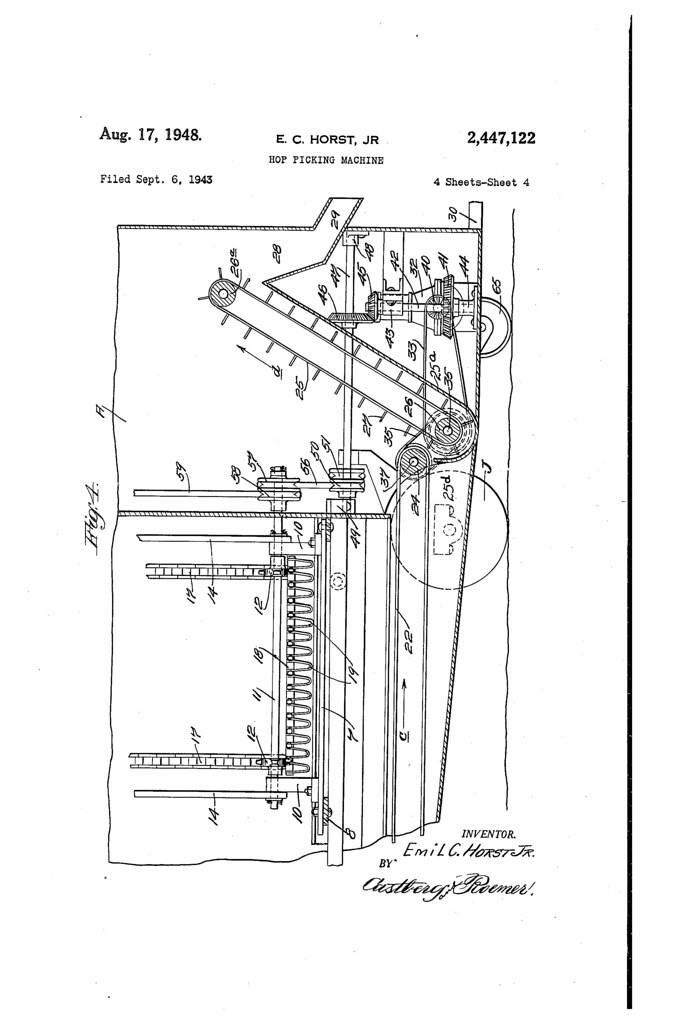