You are here: Home / Beers / Patent No. 2513765A: Mashing And Lautering Apparatus For Brewing

Today in 1950, US Patent 2513765 A was issued, an invention of Arthur B. Webb, assigned to the Cream City Boiler Company, for his “Mashing and Lautering Apparatus For Brewing.” There’s no Abstract, although in the description it includes this summary:

This invention relates to mashing and lautering equipment for use in brewing, and has as its general purpose to provide a combination mash and lauter tub or tank of simplified and improved construction.

Although this invention is primarily concerned with the construction of the aufhack or agitator which keeps the mash suitably agitated during mashing and lautering, and the plow or scraper by which the spent grain is swept out of the tank at the completion of the lautering off period, it will be advantageous to briefly outline the steps followed in mashing and lautering.

The mashing operation consists in cooking the grain in water to convert its starch content into sugar. This may be done in a separate tank, or as contemplated by the present invention the mashing and lautering may be done in the same tank.

Lautering is the drawing off of the extract or liquor from the bottom of the tank. During this procedure the mass is gently agitated, and towards the end of the lautering off, sparging water is sprayed over the contents to flush out all possible extract from the grain. At the completion of the lautering’ and sparging when all of the extract has been drawn off, the spent grain is discharged from the tank through a trapdoor in its bottom. I

In the lautering 01f of the extract the bottom layer of the mass serves as a filter bed. Hence, it is extremely important that this bottom layer be left undisturbed. If it is broken or disturbed, the extract being lautered off becomes turbid. Such breaking of the bottom filter layer thus entails long periods of quiescence to allow the turbidity producing particles to settle out and enable the bed to reform.

Satisfactory lautering, therefore, poses two difficult problems. To assure flushing all the extract from the mash, it is essential that the sparging water reach all portions thereof, and this requires having the aufhack or agitator blades reach down into the mass as far as possible. On the other hand the bottom layer which serves as a filter bed must not be disturbed. It thus follows that the extent to which the agitator blades can be lowered bears a relationship to the spacing between adjacent blades, for blades that are spaced far apart can be brought down closer to the bottom without breaking the bottom layer than blades that are spaced closer together past the desired wide spacing between adjacent blades has been achieved by increasing the number of radial arms-which carry the blades and, of course, staggering their radial distances from the axis of rotation so that the circular paths defined by the blades in operation are quite close together although the distance between adjacent blades is much greater. This obvious solution to the problem of effecting increased spacing between adjacent blades entailed the objection of having the inside of the tank cluttered up with mechanism.

As a result cleaning the tank became a tedious task. In such cleaning, the segmental screen sections which form the false bottom of the tank have to be lifted and are generally set up against the side wall of the tank. Inasmuch as these sections are quite large the presence of three (3) or more agitator arms inside the tank became a source of much inconvenience and irritation. Practically every time a screen section was lifted the agitator had to be moved.

With this objection in mind, the present invention has as one of its objects to provide an improved aufhack or agitator wherein only a single pair of arms carries all of the agitator blades, but in a manner spacing the operating portions of the blades and particularly the lower ends thereof far enough apart to preclude breaking the bottom filter layer, even though the blades are lowered to within a short distance from the false bottom.

As can be readily appreciated, the agitator blades in cutting through the relatively compacted mass, leave circular channels in their wake which if not closed allow the sparging water to by-pass portions of the mass with the result that all the portions of the grain are not flushed as effectively as desirable. Hence, it is another object of this invention to provide means for closing up the circular channels cut into the mass by the blades as they sweep around the tank.

More particularly it is an object of this invention to provide a novel trowel member adapted to ride upon the surface of the mass in a position trailing the agitator blades so as to close the circular channels formed by the blades.

Another object of this invention is to utilize the same structure for effecting the desired troweling action to also plow or scrape the spent grain into the discharge opening at the completion of the lautering off step and also serve as a mixing agitator during the mashing operation.

Another object of this invention is to so mount and arrange the combination plow and trowel structure that upon rotation of the agitator so that the top of the pedestal is submerged in the tank contents, the matter of providing adequate lubrication for the working parts without danger of having the lubricant seep out into the tank contents has always presented a problem. 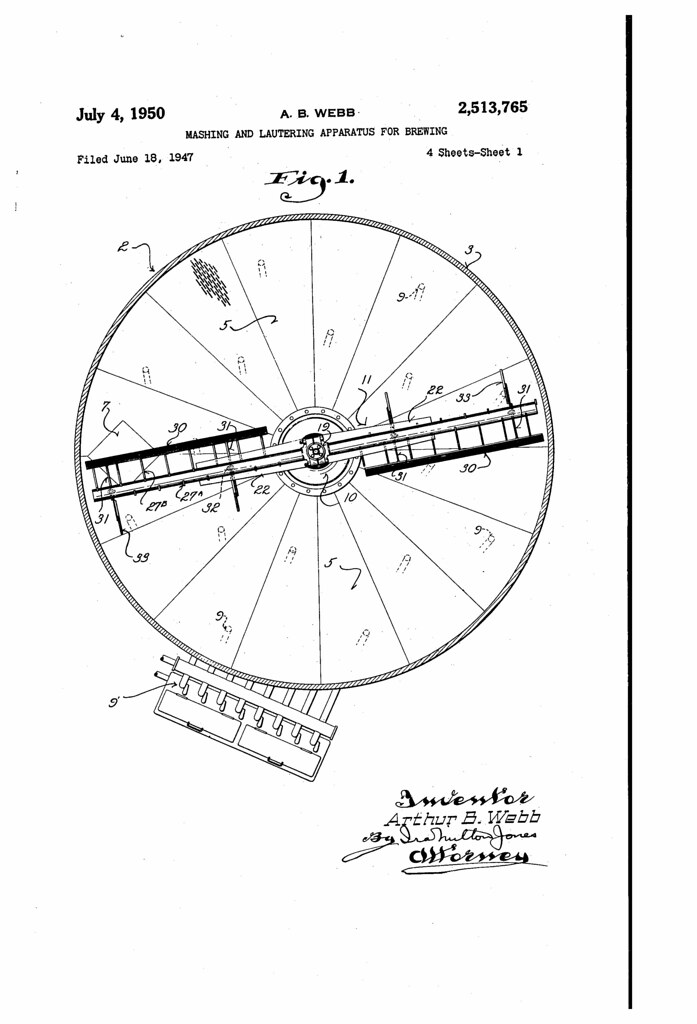 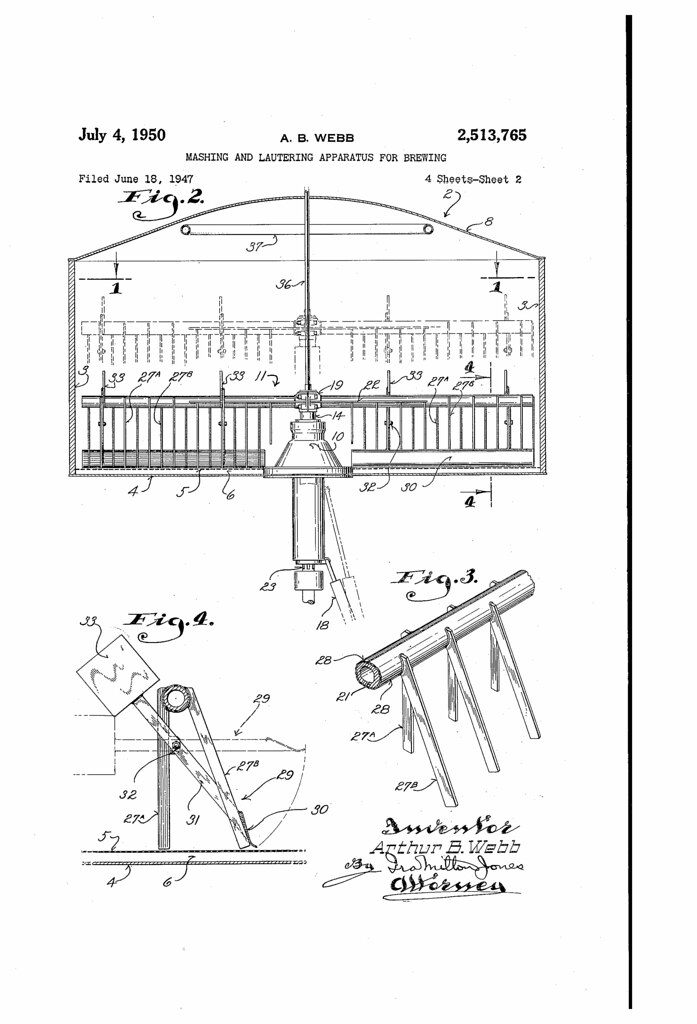 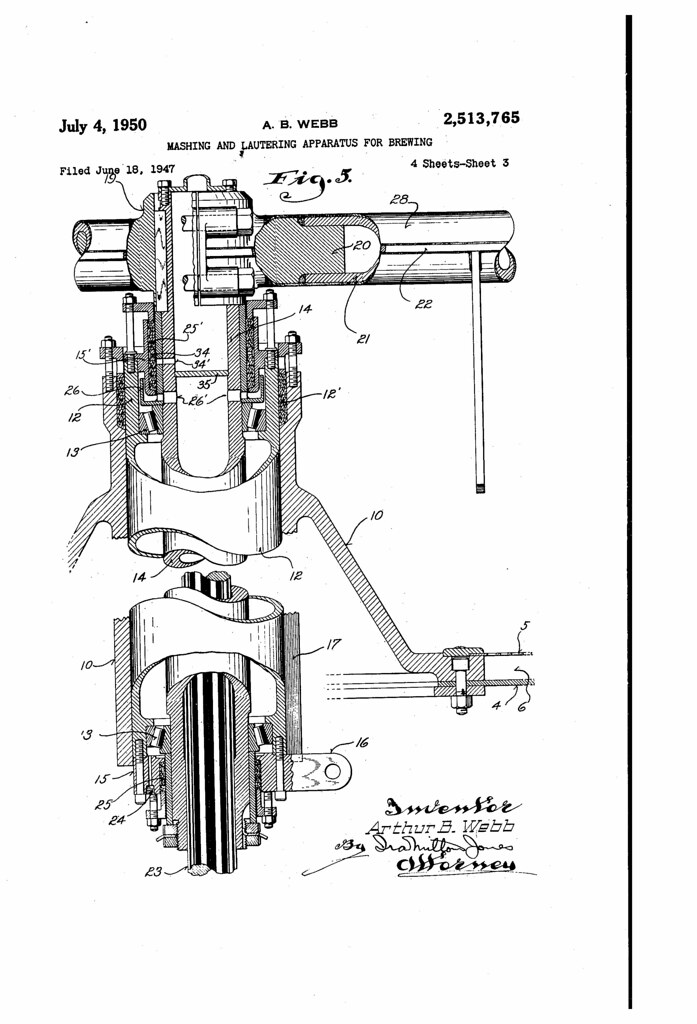 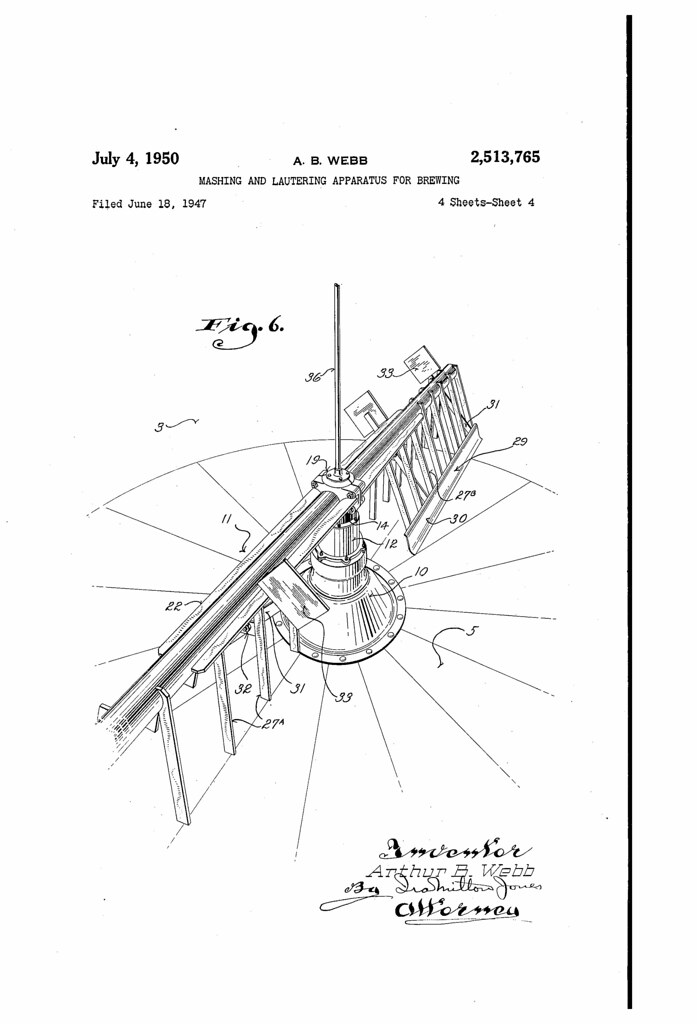