Today in 1957, US Patent 2816031 A was issued, an invention of Wilhelm Eberhard Schultheis and Walter Specht, assigned to Ultra Technik G M B H, for his “Beer Brewing Process.” There’s no Abstract, although in the description it includes this summary:

We have found that the production of beer may be made more economical and that beers of superior qualities may be obtained by the application of ultrasonic waves, which term is generally understood to define waves whose frequencies are greater than those which affect the human ear, that is, greater than about 18,000 per second. The ultrasonic irradiation, called hereinafter sonoration, may be applied to various stages of the brewing process. For instance, hops in the presence of water or aqueous solutions, intermediary products such as mash, wort, glattwasser (last wort), or by-products, such as trub, may be treated, singly or severally, also in mixture with each other, with ultrasonic waves to obtain advantages.

As an ultrasonic generator, e. g. the immersion device type T 300a, rotation irradiator with high frequency generator (1000 kilocycles), built by Ultrakust G. m. b; H., Ruhmannsfelden, Lower Bavaria, may be used. The apparatus is preferably operated with full output, whereby it transmits about 300 watts ultrasonic energy to the treated batch.

The sonorat-ion is preferably carried out at elevated temperatures, e. g. between about 50 to 100 (3., which temperatures should be kept constant, and with at least temporary circulation of the treated solution.

A well known drawback of the conventional hopping process, where hops as such are added to the wort, is due to the fact that in the boiling process only about one-third or one-fourth, generally not more than 35 percent, of the bitter principal ‘(resins) contained in the hops pass into the wort, and that, in addition, considerable amounts, e. g. about 3 to 7 percent, of aid resins are precipitated during fermentation and storage.

According to the invention, these drawbacks are obviated by subjecting hops to sonoration in the presence of water or aqueous solutions, e. g. softened brewing water, wort, or last wort; hereby the valuable resins of the hops are dispersed in the extracting liquid without objection: able loss, and the thus obtained resin extracts are used for hopping the wort.

As the hop resins are difficulty soluble in water, only limited amounts of said resins can be dissolved in the water or aqueous solutions used as solvents. In addition, the dissolved resins readily precipitate again, particularly in the presence of absorbent substances, such as spent hops, trub, yeast, or carbon dioxide bubbles. The separation of the resins is further assisted by the fact that the pH of the sweet wort changes during fermentation from United States Patent 2 5.5 to about 4.5, which reduces the solubility of the resins.

We have found that ultrasonic waves have the elfect of producing a fine colloidal dispersion of the difficulty soluble resins in the extract, and at the same time, a stabilization against objection-able precipitation of said dispersed resins in the extract and later in the wort. We believe that this stabilizing action is due to colloidal substances which pass by the sonoration together with the resins into the aqueous liquid, and also to colloidal substance contained in the wort; This may explain the phenomenon that res-ins isolated by sonoration from the hops and dispersed in the aqueous phase can be concentrated in the extract; even in the acid range, to a considerable’ extent and that on addition of the resin extracts thus obtained to the boiling wort objectionable precipitation of resins is substantially avoided. Therefore, the resins are essentially retained in the wort and do not pass, to the extent experienced heretofore, into the trub or during fermentation into the so-called curls or into the yeast.

The extraction of the resins by scnoration may be carried out separately in a metal vessel of a suitable size for the hatch, e. g. in the hop strainer available in breweries, and the resin extract thus obtained will be admixed to the wort in suitable amounts. For instance, we may mix the allotted amount of hops with the extracting liquid, which has been heated to about 50 to 60 C. or even higher, and first agitate the mixture, for instance by circulator, for several minutes to obtain swelling and only subsequently start the sonoration. As extracting liquid, we may use decarbonate’d brewing water, or the glattwasset (last wort) obtained by washing (sparging) the spent grains separated from the first wort, or even the first wort itself. The amount of liquid to be added to the hops depends on the desired concentration ratio between hops arid liquid. In determining the optimum working conditions, it must be taken into account that the maximum extraction effect is not only dependent on said concentration ratio, but also on the nature and composition of the extraction liquid, the pH value, the extraction temperature, the ultrasonic intensity and the sonoration time. Our experiments were carried out at a temperature of about 5060 C. and the temperature was kept constant throughout the extraction period. Under these conditions, a sonoration period of about one hour lproved generally to be sufficient; sometimes it was necessary to apply a somewhat longer sonoration, e.g. up to two hours, in order to obtain optimum results. The extraction by means of sonoration may, however, be carried through also at higher temperatures, e. g. between 60 and C. with a shortened sonoration.

After completion of the extraction, the resinous extract may be separated from the spent hops, e.g. by filtering with suction, and separately processed. 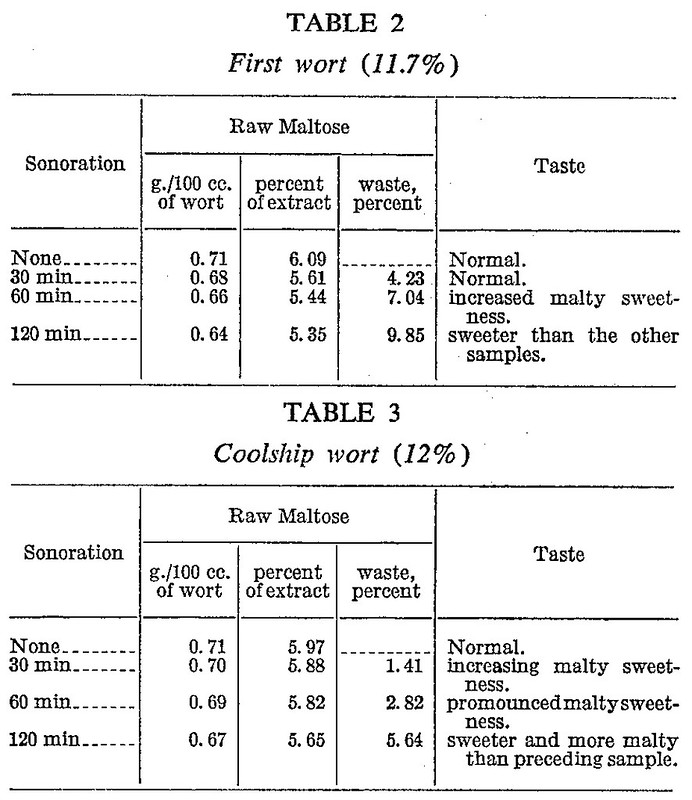