You are here: Home / Beers / Patent No. 2919193A: Process Of Preventing Haze Formation In Beverages

Today in 1959, US Patent 2919193 A was issued, an invention of Harry J. Sandell, for his “Process of Preventing Haze Formation in Beverages.” There’s no Abstract, although in the description it includes these claims:

The present invention relates to a method of reducing or preventing formation of hazes in fermented or unfermented beverages produced from cereals, fruits, other vegetable materials or parts thereof, and especially in malt beverages, e.g. beer, and in fruit juices and wines.

The present invention is based upon the surprising discovery that it is possible to prevent the formation of a haze in beverages such as, for instance, malt beverages, fruit juices and wines, by the addition of polyvinyl pyrrolidone or a homologue thereof in an excess over the above-mentioned quantity, i.e. 0 to 8 g. per hectolitre, which is necessary for maximum precipitation of the haze forming constituents. The process of the instant invention thus comprises adding polyvinyl pyrrolidone in a total quantity of at least 1 g. per hectolitre and in any case in an excess quantity of at least 50% over that needed for maximum precipitation. The stated lower limit 0 g. per hectolitre for the quantity of PVP that is needed for maximum precipitation either refers to the case (1) in which PVP having an average molecular weight of below about 15,000 is used and thus cannot form any precipitate or refers to the case (2) in which the kind or quality of beverage, e.g. beer, used does not give any precipitate with PVP even if the average molecular weight of the PVP used is above about 15,000. In the first-mentioned case, i.e. WhenP having a lower average molecular weight than 15,000 is used, it has been found, that a good result is obtained if the treatment with PVP is carried out according to the above-mentioned invention, i.e. by adding at least 1 g. of PVP per hectolitre. In the second case there is also obtained a good result if to the beverage there is added at least 1 g. of’PVP independent of its average molecular weight. While thus an excess of’P-VP of 1 g. per hectolitre might be considered as usable it has been found that when using PVP of an average molecular weight below about 15,000 or above about 15,000 it is suitable to add totally at least 5 grams of PVP per hectolitre provided that there is added at least 50% in excess over the quantity of PVP of’O to 8 grams per hectolitre that is needed for maximum precipitation of the haze forming-constituents with the PVP in question. 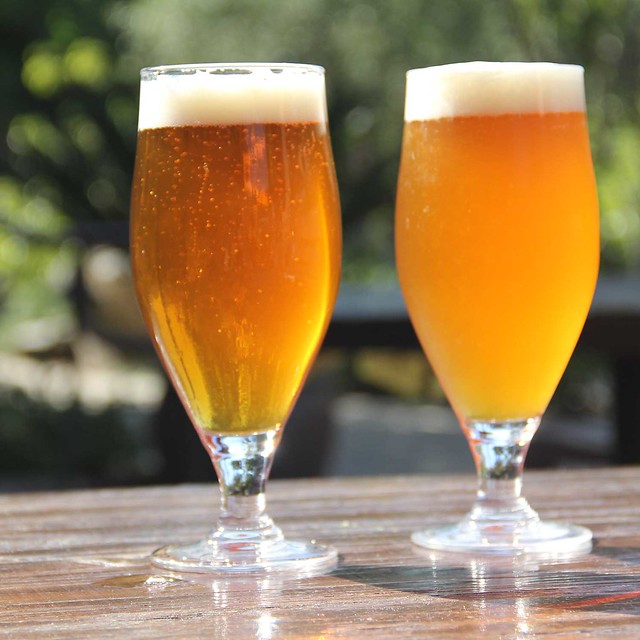