You are here: Home / Beers / Patent No. 3266263A: Concentration Of Aqueous Solutions By Crystallization With Sonic Defoaming

Today in 1966, US Patent 3266263 A was issued, an invention of Lyle W. Pollock, for his “Concentration of Aqueous Solutions by Crystallization with Sonic Defoaming.” There’s no Abstract, although in the description it includes this summary:

Conventionally, aqueous solutions can be concentrated by crystallization involving chilling the aqueous solution to form ice crystals with subsequent separation of the ice crystals from the mother liquor. This method as `applied to the concentration of food products has become commercially acceptable as it can be carried out without damaging the taste of the food product. In this respect, concentration by crystallization represents a considerable improvement over evaporative processes which rely upon heat and/or extremely low pressure. The removal of water by evaporation also results in the removal of much of the essential oils and esters, many of which are not recoverable, so that the concentrated product can never be restored to its original freshness and flavor. Concentration by crystallization can be employed to advantage in the processing of such food products and beverages as milk, fruit juices, vegetable juices, vinegar, beer, wine, liquors and the like.

A method of concentrating by crystallization involves chilling the aqueous solution in a chiller to form a slurry of ice crystals and mother liquor and then forcing the resulting slurry into a crystal purification column such as described in the patent to Schmidt, Re. 23,810, and the patent to R. W. Thomas, 2,854,494, and comprising an elongated confined concentration zone. The crystals are moved in a compact mass into a body of crystal melt which is formed by heating the crystals in a downstream portion of the concentration zone. A portion of the crystal melt is displaced back into the advancing crystal mass. The purification column includes an upstream liquid removal zone, a middle reflux zone and a downstream melting zone. Mother liquor is removed from the crystals in the liquid removal zone and the crystals :are melted in the melting zone.

The inventive process can be employed to advantage in the processing of such food products and beverages as milk, fruit juices, vegetable juices, vinegar, beer, wine, liquors, and the like. The inventive process is particularly applicable to the concentration of beer as the beer 3,266,263 Patented August 16, 1966 ICC withdrawn from the fermenters usually contains 1 to 2 volumes of carbon dioxide at standard temperature and pressure (60 F. and l atmosphere) per volume of liquid beer. Therefore, contacting the 4beer with carbon dioxide does not involve the introduction of a new component to the beer.

Freezer 11 is provided with a means for mixing 12 the carbon dioxide and beer feed streams. In order to prevent foaming, conventional sonic defoamers 13 are employed. Reference is made to lChemical Week, May 6, 1961, page 52, for a discussion of the effectiveness of sonic defoamers as applied to the beer industry. 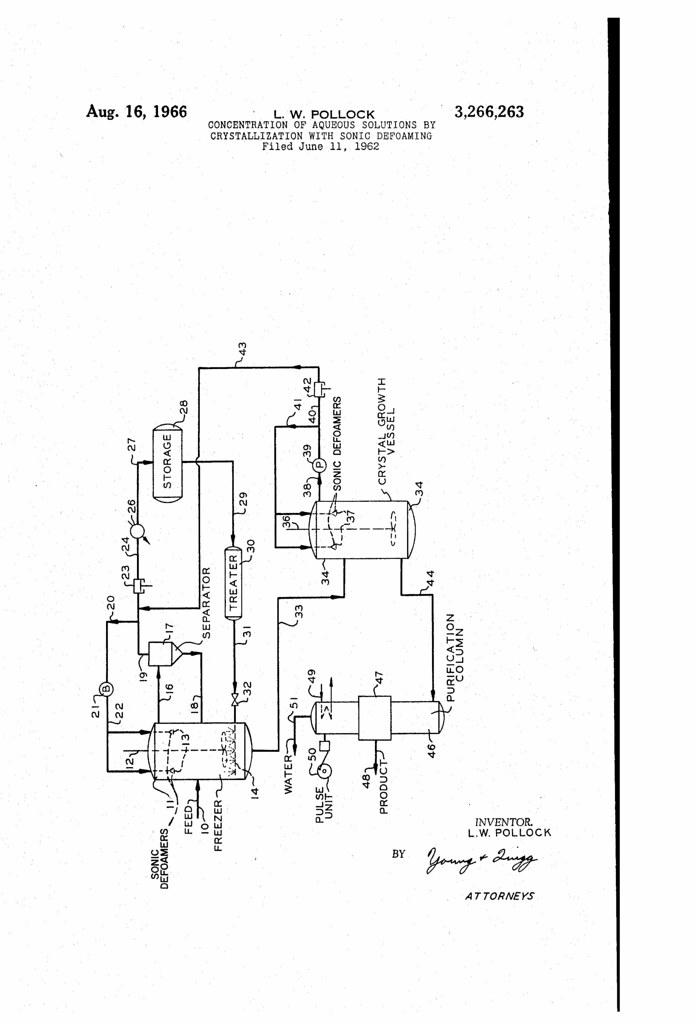