You are here: Home / Beers / Patent No. 4112: A New Or Improved Method Of Drying And Preparation Of Malt

Today in 1817, British Patent 4112 was issued, an invention of Daniel Wheeler, for his “A New or Improved Method of Drying and Preparation of Malt.” According to one account, “Black patent malt changed the game in beer history, as it allowed darker beers to be brewed without the use of adjuncts that would adulterate said brew. By 1828, Guinness had replaced their entire stock of brown malt with black patent malt, and their own stout porter started eliciting competition from other notable breweries such as Beamish, Crawford, and Murphy’s.”

Here’s a short description of his patent, from an 1881 book, “Abridgments of Specifications Relating to Brewing, Wine-Making, and Distilling Alcoholic Liquids.” 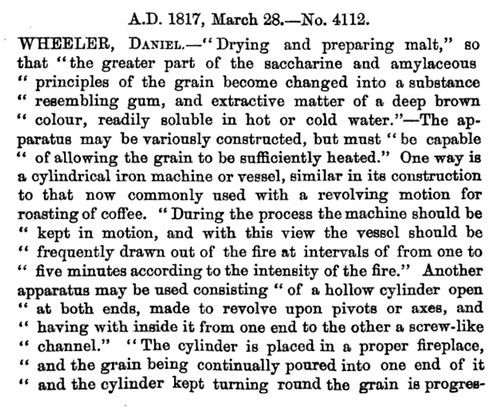 Here’s more of the background to Wheeler’s patent, from Ron Pattinson, in a post entitled Patent malt in the early 19th century:

When all forms of colouring were made illegal in 1816, Porter brewers had a big problem. How could they brew a beer of the right colour when using mostly pale malt? The answer was provided by Daniel Wheeler, who, by roasting malt in a way similar to coffee beans, created a malt capable of colouring a large quantity of wort. Pale malt was roasted at 360 to 400º F in metal cylinders, which revolved over a furnace. (Source: “The Theory and Practice of Brewing” by W.L. Tizard, London, 1846, page 90.) Wheeler acquired a patent for the process, hence the name patent malt. It was also known as black malt, porter malt or roast malt. 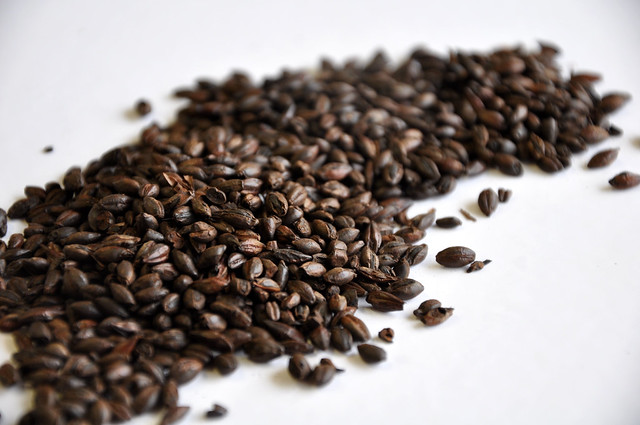 And here’s another account of his patent, and its effect on the history of brewing.

In 1817, Daniel Wheeler obtained British Patent No. 4112 for a “New or Improved Method of Drying and Preparation of Malt.” His invention of the Drum Malt Roaster allowed maltsters to roast malt to the point where a small amount of malt could darken a large amount of beer without imparting an overly burnt or tarry taste to the entire brew. Before Wheeler’s invention, brown ales were made exclusively from brown malt, but the advances in kilning technology gave way to the use of pale malts, which became a cheaper and more reliable alternative. Therefore, the color and flavor profiles of brown ales were subsequently determined more by modern style dark malts, crystal malts and caramelized sugars.

And one more, partially from H.S. Corran’s A History of Brewing:

The malt bill is a combination of new and old but truly british malts (minus the 6-row). Black Patent Malt leading the way to the creation and evolution of porters by helping differentiate it from brown ales. From H.S. Corran’s A History of Brewing (1975), “On March 28, 1817, he obtained British Patent No. 4112 for “A New or Improved Method of Drying and Preparation of Malt. The adoption of malt made according to Wheeler’s patent, and called ‘patent malt,’ marked the beginning of the history of porter and stout as we know it today, and put an end to the period during which the term ‘porter’ was probably applied to any brown beer to distinguish it from pale ale. The new process was effective, economical, produced a palatable product and freed brewers from charges of adulteration. It was quickly taken up throughout the British brewing industry. Whitbread’s Brewery recorded stocks of Patent Malt in 1817, as did Barclay’s in 1820, and Truman’s showed stocks of ‘Black Malt’ in 1826.”