Today in 1903, US Patent 730651 A was issued, an invention of Herbert Amos Hobson, assigned to the Concentrated Beer Company Ltd., for his “Brewing.” There’s no Abstract, although in the description it states that “this invention relates to a method of brewing in which a hopped wort is produced by first making an infusion or decoction of hops, then running off the infusion or decoction, and after fixing the tannic acid extracted from the hops mashing malt (or malt and grain) in the hop infusion or decoction as the mashing liquor.” Hobson was a British analytical chemist, and obviously he didn’t patent “brewing,” but an improvement on the process. I use the same titles that the grant of application uses, but sometimes they’re a little strange, case in point this one. Anyway, Hobson goes on to describe it great detail:

The invention consists,first, in a methodical process whereby the residual soluble matter contained in the spent malt and spent hops is extracted, the liquor containing such residual extractive matter being used instead of plain water for making the decoction of hops for a fresh brew, so that the residual malt and hop extract obtained from the spent malt and hops left from one brew will be utilized in the next succeeding brew, and so on.

The invention consists, secondly, in withdrawing from the hop extract (after it has been treated to fix the tannic acid, but before it is used for mashing) a portion of the hop liquor, separately heating the liquor thus withdrawn, and returning it to the bulk of the liquor after the mashing of the latter with malt, (or malt and grain,) so as to thereby raise the temperature of the mash without causing dilution thereof, as would be the case were naked steam blown in. 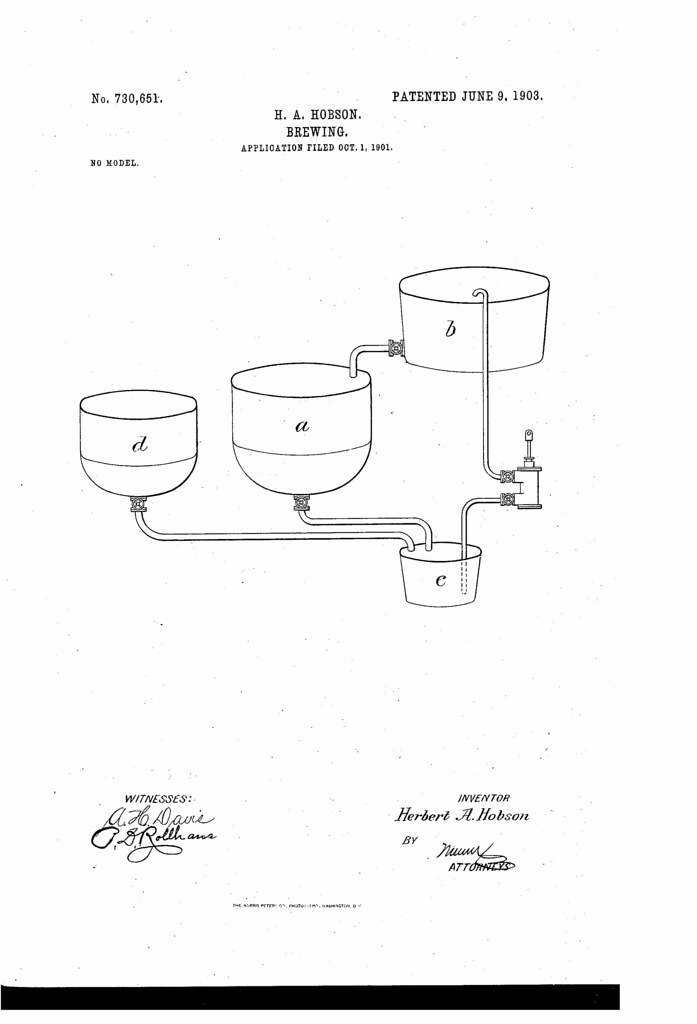