Today in 1904, US Patent 775780 A was issued, an invention of Joseph Schneible, for his “Art Of Brewing.” There’s no Abstract, although in the description it includes these claims:

This invention relates particularly to the preparation of beer-wort, and has for its object to make-it possible to produce with certainty a wort of definite character, with reference particularly to the relationship between sugar and non-sugar, maltodextrins and dextrin, etc.

According to the methods of brewing now practiced the production of a wort of a definite or the best character in so far as it is dependent upon the relative amounts present in it of the different starch derivatives is practically impossible. This is largely due to the fact that the malt mash is subjected for a time long enough to permit conversion of the starch to take place to varying temperatures without so controlling the temperatures as to obtain the different starch derivatives in the desired proportions. This variation of temperature necessarily results from delivering, as is the customary practice, the cooked unmalted cereal mash or other heating medium,”such as hot water, which in some systems of brewing is used to raise the temperature of the malt mash, at substantially the boiling temperature to the mash-tub, which already contains the peptonized malt mash, which is at a temperature much below the boiling-point. The stream of boiling-hot cooked mash raises the temperature of the adjacent portions of the malt mash to a heat approximating its own temperature,which unduly elevated temperature continues long enough for conversion of the starch obviously where the hot cereal to begin. mash or other heating medium is thus introduced into the malt mash it is not only impossible to regulate the temperature to which portions of the malt mash are thus raised, but it is also impossible to regulate the quantity of the malt mash which has its temperature thus unduly raised, and the degree and extent Serial No. 186,592. (No specimens) of conversion or saccharification is therefore impossible of regulation under such methods.

It will be obvious that the invention can be practiced in different ways and with different forms of apparatus, the most convenient and practicable mode of practicing the invention being to thoroughly mingle the malt mash and the hot cooked mash or other heating medium while in movement from the respective tanks or sources of supply tothe common mash-tub or strainer-tub, so that the desired converting temperature is attained at once in the commingled mashes or commingled malt mash and heating medium. After being so mingled the combined liquor is allowed to stand for the usual period of time required for conversion. 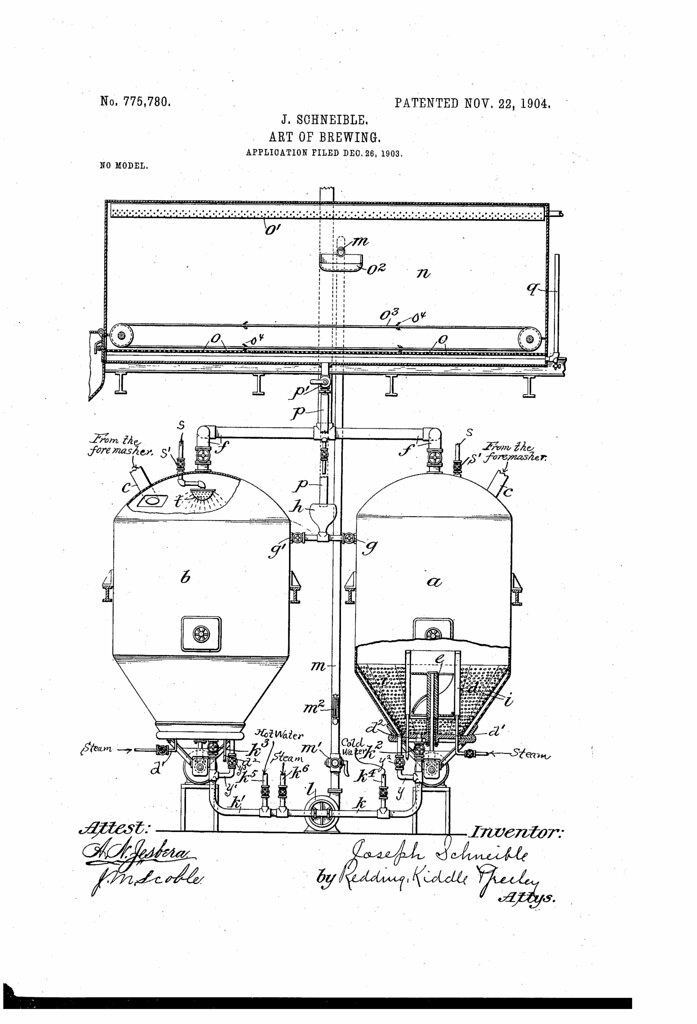