Today in 1906, US Patent 810745 A was issued, an invention of Hugo Gronwald, for his “Method of Pasteurizing Beer.” There’s no Abstract, although in the description it includes this summary:

I have invented a new and Improved Method of Pasteurizing Beer in Barrels, of which the following is a full, clear, and exact description.

The hitherto-known method of pasteurizing beer in the barrels in which it is to be transported had the disadvantage that when the barrels were provided with a separate expansion-chamber the natural carbonic acid contained in the beer was`partly lost and the germs or barm at times contained in this chamber could not be killed, so that the beer frequently overflowing into this chamber was not entirely free from germs, while when the necessary space for expansion was provided by not filling the barrel complete y it had to be filled up with beer from another source. These disadvantages are removed according to my improved method by dividing the quantity of beer required for completely filling the barrel between two connected vessels-namely, a lower detachable vessel, hereinafter called receiver, equal in capacity to the required space for expansion and a barrel communicating with and arranged above this vessel in such a manner that the receiver is completely filled, while in .the barrel an empty expansion-space is left equal to the capacity of’ the receiver. The beer is then pasteurized in the barrel and receiver and cooled in the usual way, after which the carbonic acid disengaged during the pasteurizing and which as risen into the. expansion-space in the barrel can be returned Without loss to the beer-‘for instance, by shaking the barrel. T he pasteurizing apparatus being then turned upside down, the beer runs into the barrel from the receiver, while the excess of carbonic acid mounts into the receiver, so that by this simple exchange of the contents of the vessels a filling up of the beer-barrel from another source is rendered unnecessary and loss of carbonic acid is avoided.

Various apparatus or plant may be used for carrying out my said method, provided the barrel and receiver are connected into a combined apparatus. 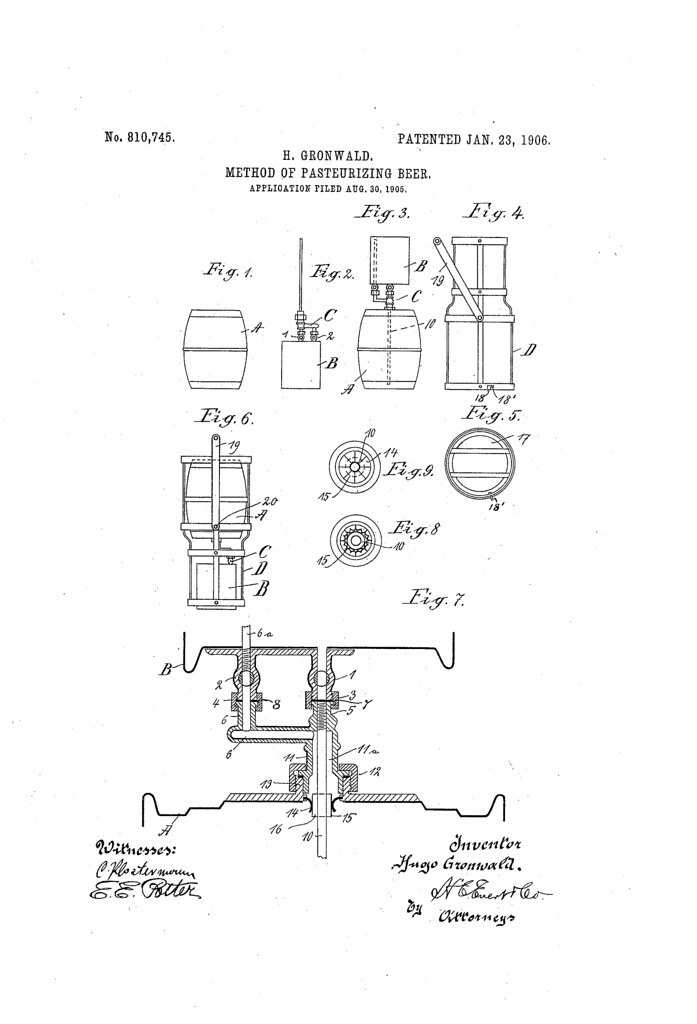