You are here: Home / Breweries / Peter Hoey Returns To His Urban Roots With New Brewery

I got a heads up from my friend Peter Hoey a few days ago that he’s leaving Brewer’s Supply Group and embarking on a new venture in Sacramento. I’ve known Peter since he was brewing at Bison Brewing, and he’s been brewing and consulting around the Bay Area for many years, including at Sierra Nevada and Sacramento Brewing. He announced today that coming this fall, he’ll be brewing again at his own place in downtown Sacramento, which will be called Urban Roots Brewing. Their Facebook page went live this morning, too. Peter’s partnering with Rob Archie, who also owns the Pangaea Bier Cafe. I’ve met Rob at several beer events over the years, and I think he’ll be a great partner in this, and will appreciate how talented a brewer Peter is. The lease is already signed and they’re fairly well along in the process. Fall seems reasonable, actually, even though most such predictions, in my experience, tend to be twice as long as originally thought. But Peter has opened breweries before, and knows what he’s up against, so I think we’ll be able to sample his new beer before the end of the year, which is terrific news.

Here’s the press release that came out today:

Peter Hoey has worked toward this moment for over two decades. He has practiced his craft alongside the legends at Sierra Nevada, led the charge at Sacramento Brewing Company, and currently consults with the top beer brands in the country for BSG CraftBrewing, an industry supplier of brewing ingredients. Recent production collaborations include the highly sought after Hoeybeer with Santé Adairius Rustic Ales.

After a decade of collaborating together in the industry, partnering with Rob Archie on Urban Roots will fulfill Hoey’s life-long dream of producing some of the finest beers in the world, pairing them with simple, clean and delicious food, and showcasing Sacramento’s regional farm-to-fork ingredients.

A pioneer of national and international craft beer promotion in Sacramento, Rob Archie’s concept, Pangaea Bier Café, has earned the respect of top brewers in the country and a fiercely devoted clientele—not to mention being the culinary critics’ darling with back-to-back Sacramento Burger Battle judges’ choice wins, being named a Top Beer Destination every year since its opening in 2008, and receiving numerous accolades from both print and broadcast media.

Bringing their combined national and international beer travel experience and expertise home, Urban Roots will produce a myriad of beer varieties, with a focus on farmhouse style ales, oak aged beers and collaborative releases. The smokehouse will continue the culinary excellence practiced at Pangaea Bier Café focusing on regional ingredients and smoked meats. The Urban Roots name is intended to represent its location in the city’s center and its proud roots in both the Sacramento urban and farming communities.

Hoey and Archie believe that the V Street location is a key ingredient in creating their vision for Urban Roots—and their vision for Sacramento. Investing in the Downtown Sacramento/Southside Park neighborhood, and in Sacramento in general, is a reflection of both partners’ beliefs and passion for their community. Both Hoey and Archie have individual and shared histories of uniting Curtis Park and Oak Park through a successful neighborhood business, hosting sold-out beer dinners to support local philanthropy, as well as taking and sharing the Sacramento region’s talents and tastes with a global audience.

1322 V Street is exactly where Hoey and Archie want to build Urban Roots Brewery & Smokehouse, an immersive craft-beer brewery experience that doesn’t currently exist in the Capital City. In doing so, they will offer a one-of-a-kind destination for Sacramentans to come together and create a bevy of food and beer tastes for the world to enjoy. 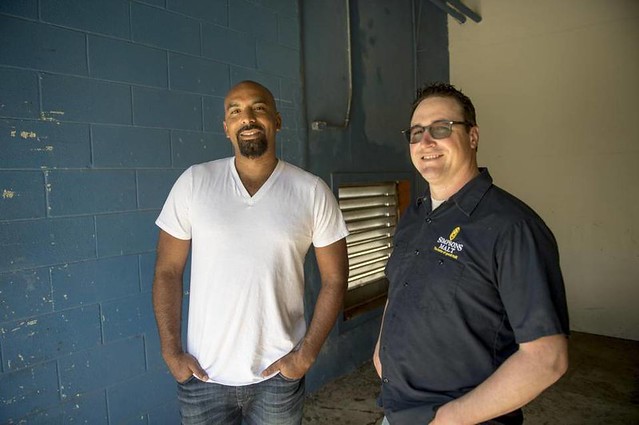