You are here: Home / Beers / Prohibitionists Calling Most Of The World “Idiotic”

Here’s yet another example of prohibitionists’ zeal run amuck. It’s one thing to disagree with opinions you don’t like, but quite another to call them “idiotic,” especially when the idea being called “idiotic” is the standard in a majority of countries worldwide. Here’s a Tweet from the chuckleheads at Alcohol Justice this morning, where they essentially insult most of the world. 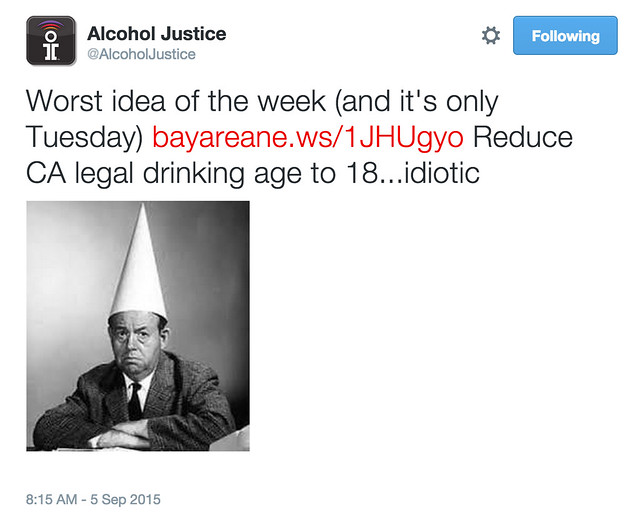 Setting aside the fact that today, September 5, is a Saturday and not a Tuesday, and they couldn’t be bothered to change the text to match reality (tell me again who’s the idiot here?), let’s see what this is all about.

What got AJ into an insulting mood was a California man’s proposal to return the minimum legal drinking age in our state to its pre-1984 level, which was reported in Proposed measure would drop drinking age to 18. And of course, Alcohol Justice disagrees with that, in part because they’re against absolutely anything that shows alcohol in a positive light or opens its availability. And disagreeing is fine, of course. Calling something they disagree with “idiotic” is childish, at best, and at worst is insulting to every other nation of the world in which the minimum drinking age is 18 or below. And that accounts for 83% of the world’s countries. Or 86% for under 21. Only 6%, or 12 countries, have 21 as their drinking age, putting us in such company as Iraq, Mongolia, Oman, and Sri Lanka. In a further 16 nations (with some exceptions for non-muslims), around 8%, it’s illegal to drink alcohol no matter what age you are. So if AJ thinks it’s idiotic for California (and America) to let its otherwise legal adults drink at age 18, by extension they think most of the rest of the world is idiotic, too. Way to keep it professional. 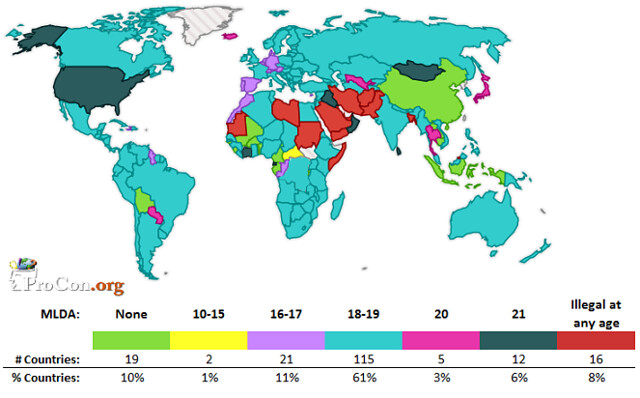 But the Legal Drinking Age for most persons is well below 21, and has been, as it had been for the United States before 1984, for a very long time, for most of human history in fact. According to Alcohol Problems and Solutions, “the average (mean) minimum legal drinking age around the globe is 15.9. The majority of countries have set the drinking age at 18. In fifty countries the minimum age is lower than 18 and in 12 countries it is higher than 18” (which has changed slightly since that was written, but the analysis is still relevant). ProCon has more current figures on the Minimum Legal Drinking Age (MLDA) in 190 Countries.

But even calling something that most of the world does “the worst idea,” especially when it’s been the norm for most of history, seems typical for prohibitionists who are already convinced they know better and have never been shy about telling you how you should be living your life and what you’re doing wrong (psst – it’s drinking and enjoying yourself). But it also feels fairly condescending and downright rude, and using the stock photo of a dour man wearing a dunce cap tells us how they really feel about the people who don’t think the same way as they do. I guess we’re all idiots.