You are here: Home / Beers / Sumerian Beer: The Origins of Brewing Technology in Ancient Mesopotamia

Peter Damerow, from the Max Planck Institute for the History of Science, in Berlin, has published online a lengthy paper about the origins of Sumerian brewing. Entitled Sumerian Beer: The Origins of Brewing Technology in Ancient Mesopotamia, it’s part of The Cuneiform Digital Library Initiative (CDLI). The opening sentence gives a flavor of its purpose. “The following paper is concerned with the technology of brewing beer in the Sumerian culture of ancient Mesopotamia, which we know about from cuneiform texts of the 3rd millennium BC. and from reminiscences in later scribal traditions which preserved the Sumerian language and literature.”

It’s broken down in to seven sections: 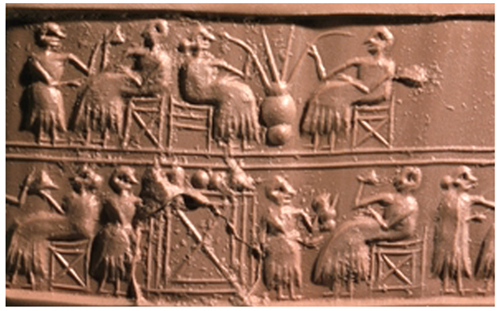 Fig. 1: Impression of a Sumerian cylinder seal from the Early Dynastic IIIa period (ca. 2600 BC; see Woolley 1934, pl. 200, no. 102 [BM 121545]). Persons drinking beer are depicted in the upper row. The habit of drinking beer together from a large vessel using long stalks went out of fashion after the decline of Sumerian culture in the 2nd millennium BC.

I confess I haven’t read the whole thing yet, but I did download the pdf of it so I can put it on my iPad. Still, just from skimming it appears fairly interesting, and a worthy piece to read over the holidays.