2013 was the year of the infographics, when I featured a new infographic each and every day, so I haven’t used too many lately. But this look at The Craft Beer Industry Supply Chain stood out as an interesting one. It was crated by Halobi, a company that specializes in supply chain and inventory management for businesses. Here’s their journey, “From Grains to Growlers.”

Boulder, Colo. • In mid-April Austin will be flooded with flavorful craft beer and the brewers who make it. That’s when the Brewers Association, the not-for-profit trade association for America’s small brewers, will hold its annual professional conference. Craft brewers from across the country will pour into Austin to attend the Craft Brewers Conference, the brewing industry’s largest gathering in North America. Attendance is expected to exceed 1,600.

Austinites will benefit from this surge of beer culture with public events at local venues featuring special beers on tap, craft beer-paired dinners and good elbow-rubbing time with the royalty of craft brewers. “Austin is a city rich in craft beer culture and we look forward to bringing the industry together in such a beer-friendly town,” said Cindy Jones, Marketing Director for the Brewers Association.

Today, sales of craft beers — beer made by small, independent and traditional brewers — are at an all-time high. 2006 marked an 11.7% increase for the category totaling a retail sales figure of $4.2 billion and 3.2% share by volume of the beer market with over 6.65 million taxable production in barrels. America’s craft beers are now a world-class brand being emulated and talked about globally.

“Having the Craft Brewers Conference come to Austin is a fantastic opportunity for the local brewers to showcase our beers,” says Chip McElroy of Live Oak Brewing Co. “We Austinites are proud of our town and the local things we have produced — especially music and beer. We just had the SXSW music conference in town, now bring on the brewers!”

Events open to the public include:

For more information about the conference visit www.CraftBrewersConference.com. The Craft Brewers Conference is open to brewing industry professionals and media only.

Last Thursday afternoon I attended a Glass Bottle Workshop put on by the California Small Brewers Association. It was held at and hosted by Lagunitas Brewing in Petaluma, California. A few dozen brewers, suppliers and one journalist packed in the party balcony at Lagunitas to talk about beer bottles. First, some interesting facts about the beer bottle industry today.

In 1985, there were 110 glass plants in the United States. Today, that number has dropped to less than half, or 49 remaining glass plants. Of those, 42 of them (or about 84%) are owned by the three largest companies; Owens-Illinris oe O-I (19 plants), Saint-Gobain (14) and Anchor (8). Seven companies own the remaining eight, with Gujarat Glass International owning two and the rest operating a single plant each. Like most modern industries today, consolidation has whittled the landscape of glass manufacturers down to a few giants with a handful of small players hanging on for dear life. Typically, that’s good news if you’re a big consumer of glass but not so good if you’re a small player. Part of the reason for the shakeup in glass makers ocurred in 1992-94, when there was a huge decline in the market, caused primarily when most soft drink companies converted from glass to plastic bottles. Longnecks far outsell the shorter Heritage bottle and twist-offs currenty outsell non-twist off.

The breakdown of glass bottles is currently as follows: 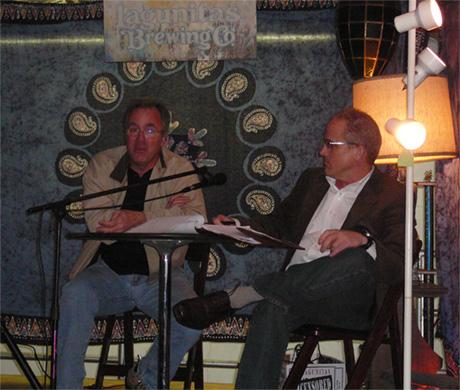 Tony Magee (from Lagunitas) and Mark House (from Pyramid) led a round table panel discussion about issues facing small brewers regarding bottles. 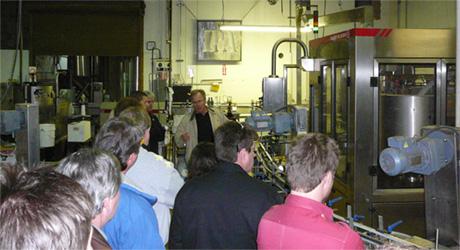 After some supplier presentations and an open discussion, the afternoon ended with a beer social. Here Dan Del Grande from Bison Brewing enjoys a pint from Lagunitas.

And here’s a story about an O-I plant in Colorado entitled the House of Glass from the Scripps Howard News Service.