Today in 1893, US Patent 508140 A was issued, an invention of Emil Koch, for his “Beer Plate.” There’s no Abstract, although in the description it includes these claims:

This invention relates to an improved plate of the kind used to support beer glasses, mugs and similar articles.

The object of the invention is to so construct the plate that it is light, durable and will readily absorb the moisture from the glass and also from the table. 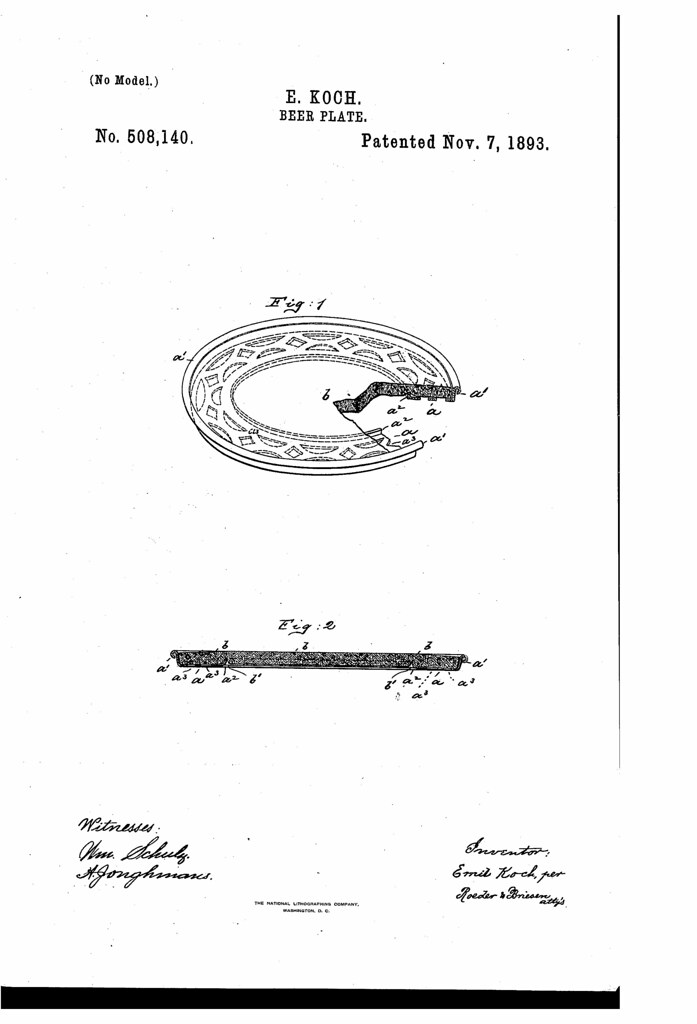 Today in 1928, US Patent 1662146 A was issued, an invention of Grant Calvin Elliott, for his “Coaster.” There’s no Abstract, but in the description it states that the “invention relates to certain improvements in coasters and it is an object of the invention to provide a dish of this kind provided with a spoon holder and wherein the spoon holder is provided with a drain delivering to the coaster or dish.” The description continues.

The invention consists in the details of construction and in the combination and arrangement of the several parts of my improved coaster whereby certain important advantages are attained and the device rendered simpler, less expensive and otherwise more convenient and advantageous for use. 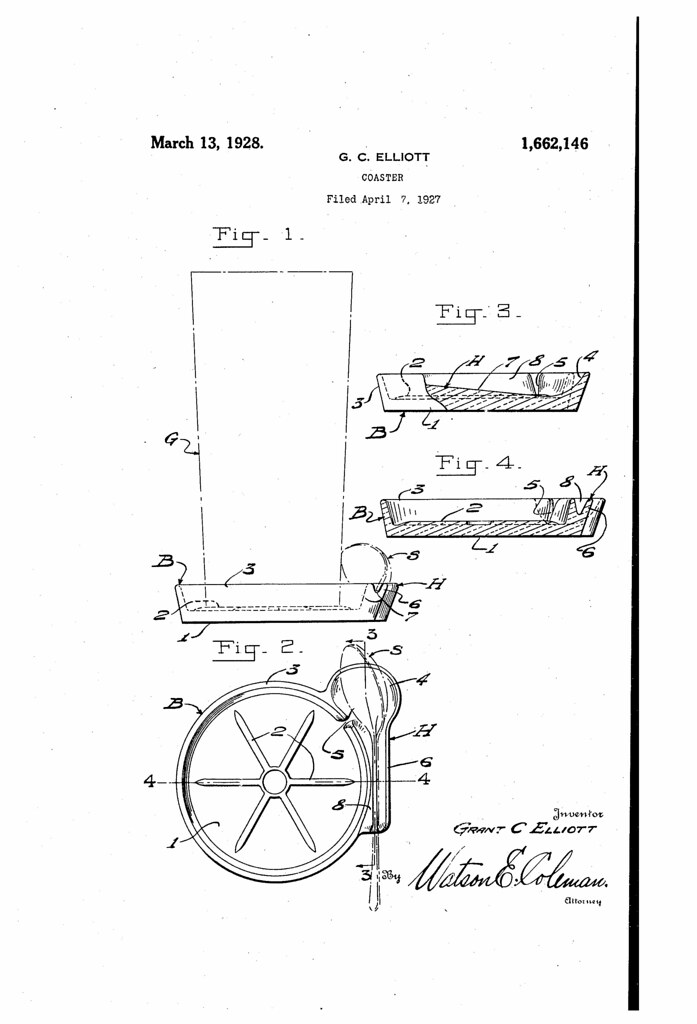 On September 2, bloggers from around the world will converge at HopHeadSaid to write about the fabulous world of beer art found on coasters, labels and caps. I am guessing that I am not so different from other beer enthusiasts – I like to collect beer labels, bottle caps and coasters. I think they are perfect souvenirs from beer travels or drinking sessions. Judging by the size of my collection you could say that I have had many enjoyable drinking sessions over the years!

Now it is time to dig through your stash and share your favorite label, coaster or cap art.

They say you can’t judge a book by its cover, but what about a beer by its label, crown or coaster? Let us know what you think for the next Session on Friday, September 2.

Most of us take the humble beer coaster for granted. I know I do, even though I have a casual collection of them that probably numbers in the thousands. I say casual because they’re in some boxex in the garage and I’ve never tried to organize them at all. Their formal name is the beermat, and “the first beermats made of cardboard were introduced in 1880 by the German printing company, Friedrich Horn.” Today, there are believed to be something on the order of 5.5 billion coasters worldwide. One company, The Katz Group, absolutely dominates the industry, with an estimated 75% market share.

But the economic crisis has reached the beer coaster now, too, as The Katz Group recently filed for bankruptcy relief in their native Germany. Spiegel reported that no one is sure what will happen to the market if the
Katz Group cannot successfully reorganize through the courts. Though they don’t say so, this has to be one of the worst potential side effects of consolidations and mergers that has been taking place worldwide for decades, with many, if not most, industries becoming increasing concentrated in just a few large corporations.

The BBC also has their take on the story and the ramifications, especially for collectors. The sheer ubiquity of them seems to all but guarantee their survival, but as priorities go, I also can’t see them rising to the top of anybody’s key businesses needing saving, like Wall Street or the auto industry. So if you have a lot of coasters lying around, best hang onto them for now.