Today in 1989, US Patent EP 0244031 B1 was issued, an invention of Johannes Antoinetta Michael Ummels, for his “Device For The Storage And Cooling Of Beer Intended For Supply To A Tap.” There’s no Abstract, although in the description it includes these claims:

The invention relates to a device for the storage and cooling of beer and the supply thereof to a tap via a water cooled beer pipe (python), which device further comprises at least one storage container and a cooling element arranged parallel thereto, consisting of a jacket with a cooling water inlet and an outlet, which jacket accommodates a beer pipe in the shape of a brake coil and a heat exchanger containing a pipe for passing a cooling medium e.g. freon. The invention also relates to a tap installation provided with such a device. 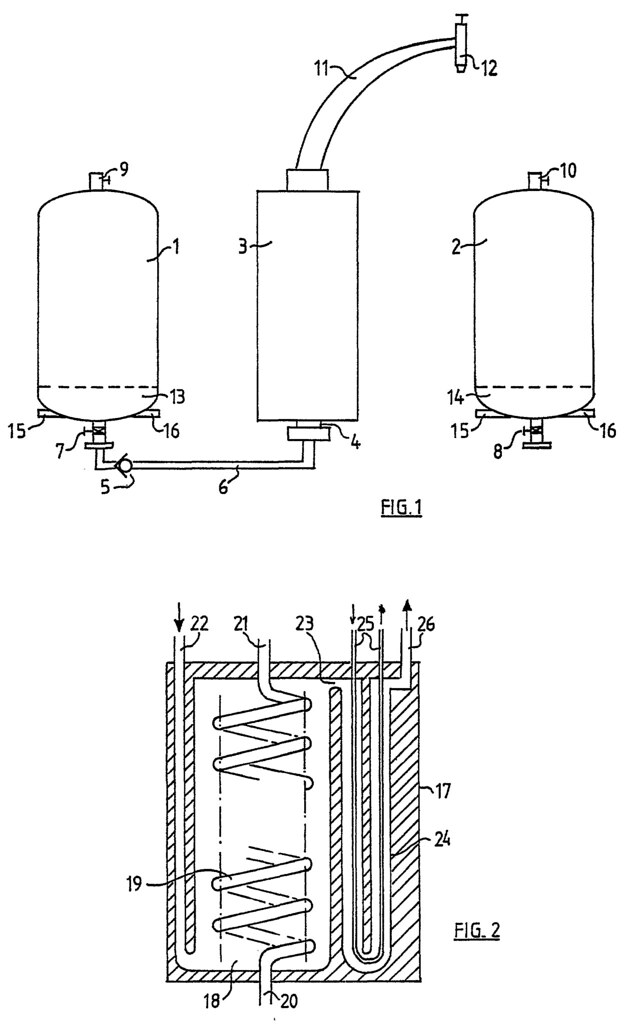 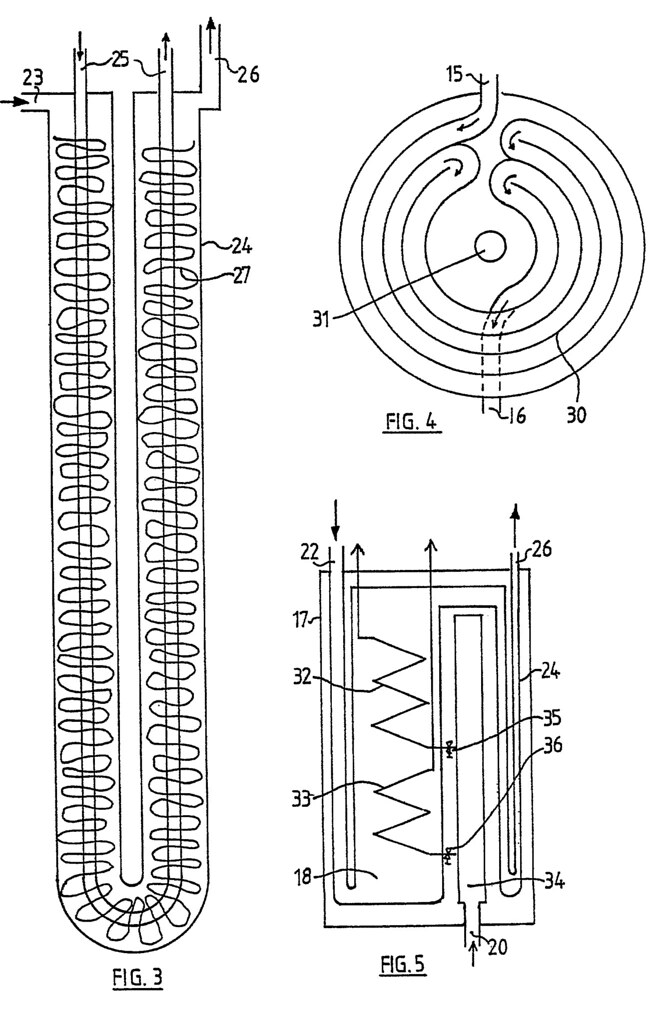 Today in 1876, US Patent 185565 A was issued, an invention of Wilhelm Noll, for his “Improvement in Liquid Forcing Apparatus.” There’s no Abstract, although in the description it includes these claims:

The invention consists in the combination of an air-pump and an air Washer or purifier, with a tapping-plug and a discharge tube, the several parts being connected with each other so as to be portable and capable of being attached to a barrel or keg. 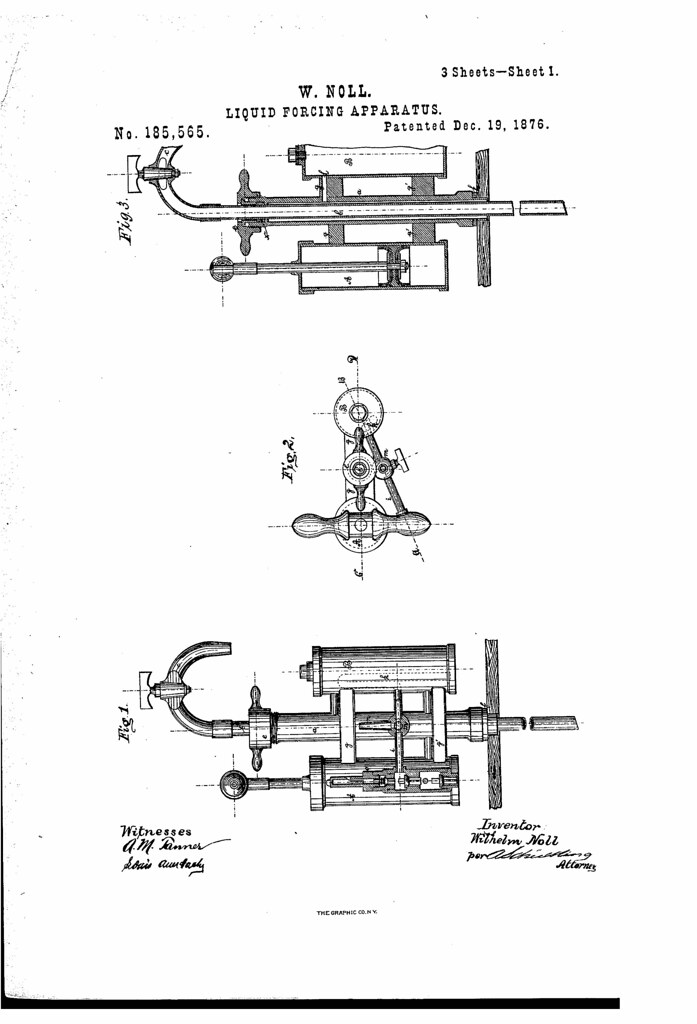 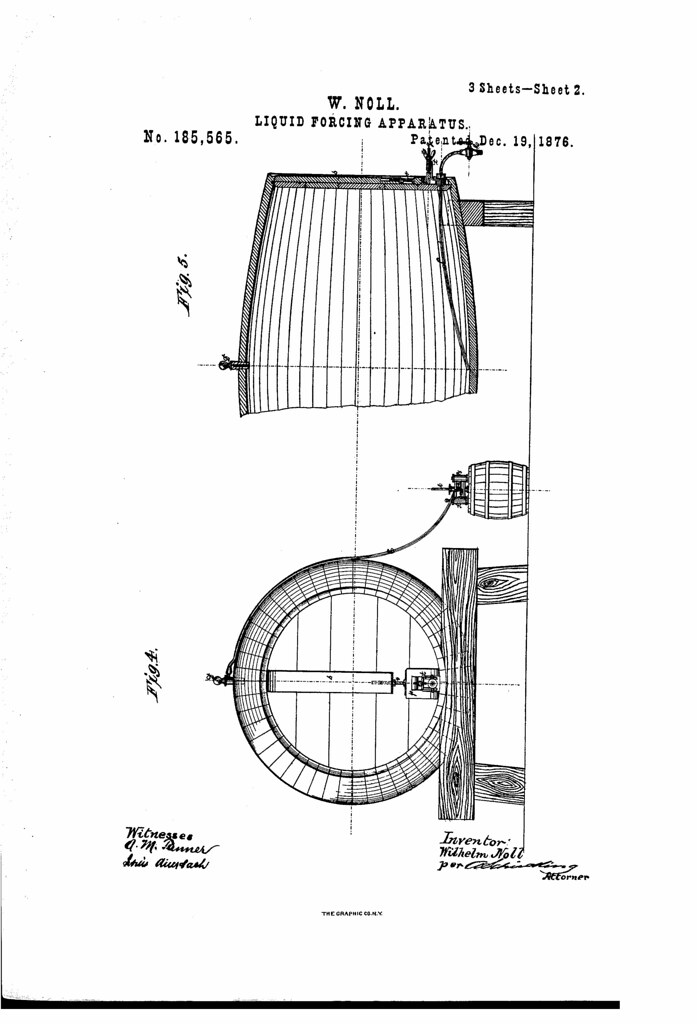 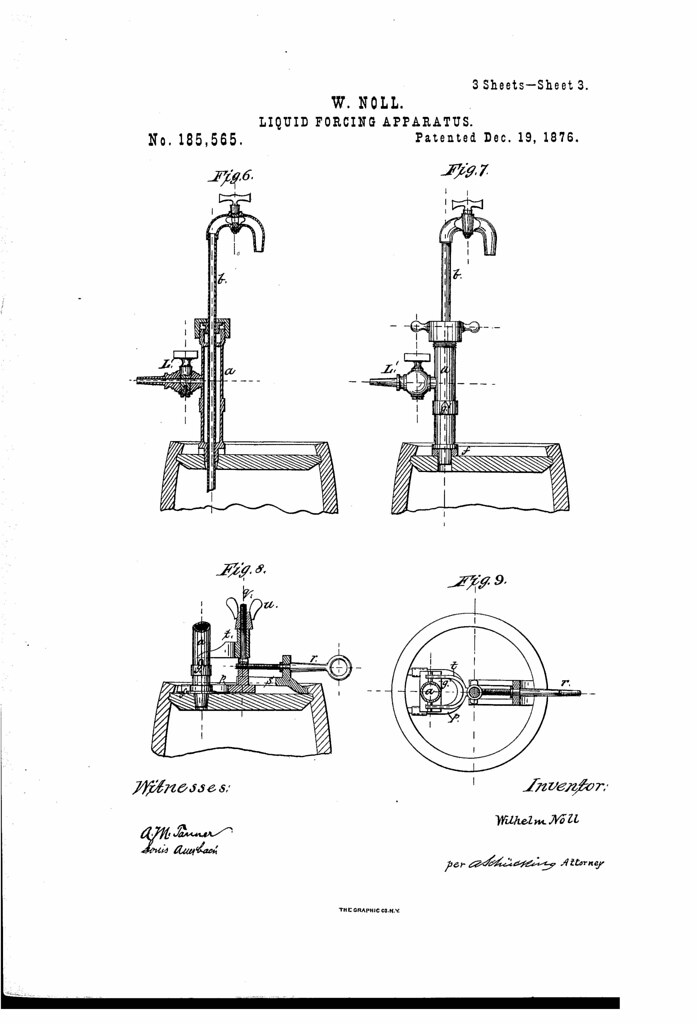 Today in 1973, US Patent 3780198 A was issued, an invention of Leo F. Pahl and Norman H. Jones, assigned to the Crown Cork & Seal Co., for their “System For Carbonating Beverages.” There’s no Abstract, although in the description it includes these claims:

It is one object of this invention to reduce the cost of carbonating beverages.

It is another object of this invention to improve sanitation. in the carbonation of beverages.

It is a further object of this invention to provide a carbonating system for beverages which is easily cleaned.

It is a still further object of this invention to achieve specified levels of carbonation in beverages with a high degree of accuracy.

It is also an object of this invention to achieve a specified level of carbonation without requiring numerous and continuous manual adjustments.

It is an additional object of this invention to permit filling of beverages at a low pressure. 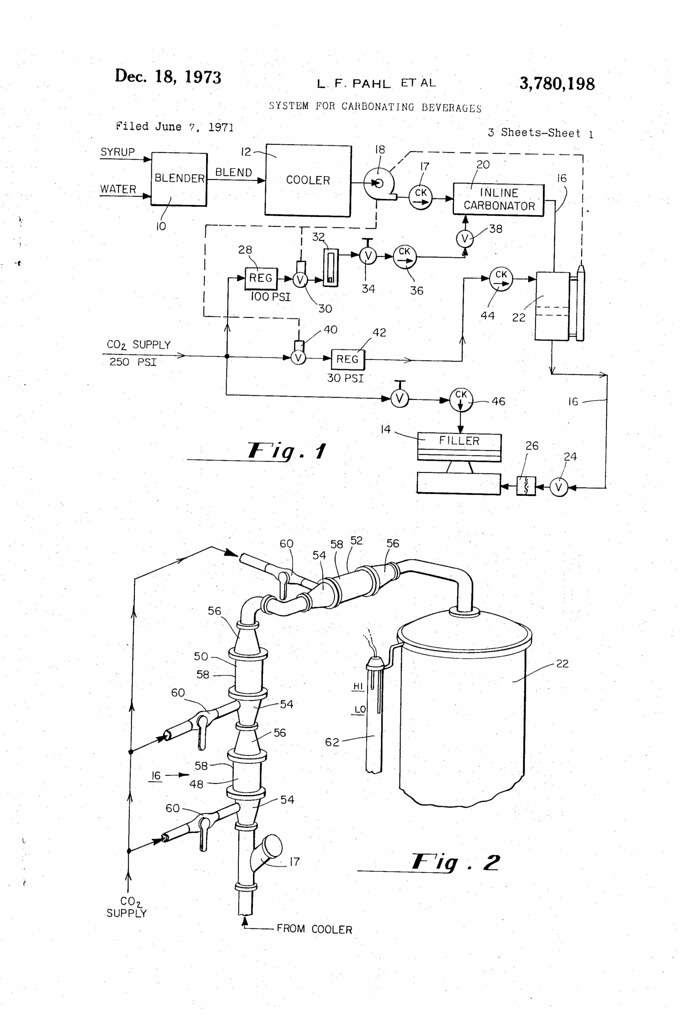 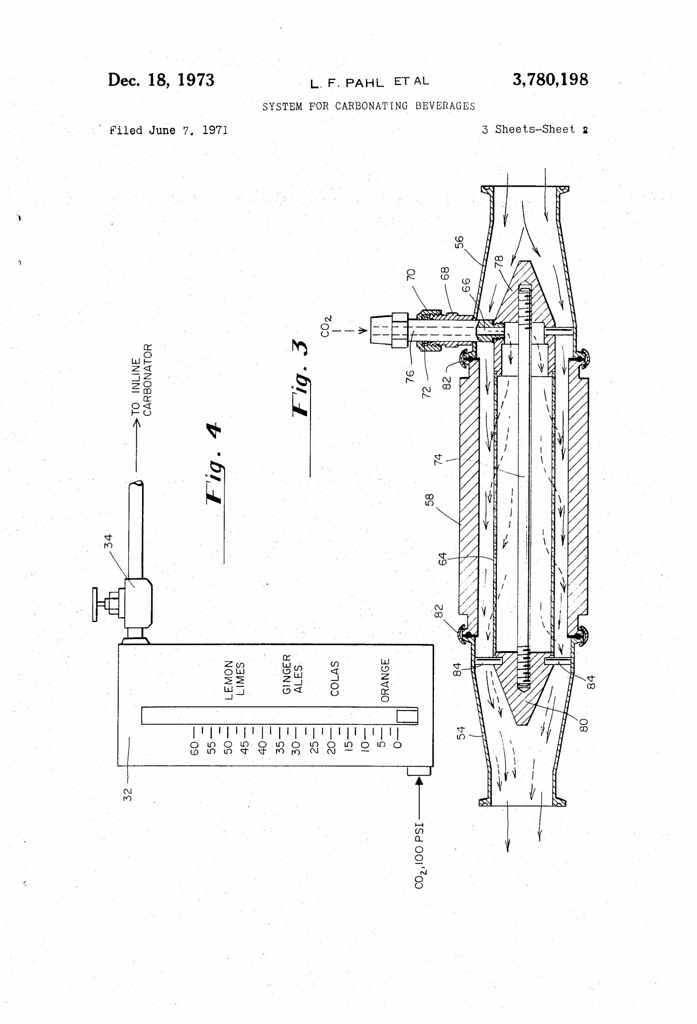 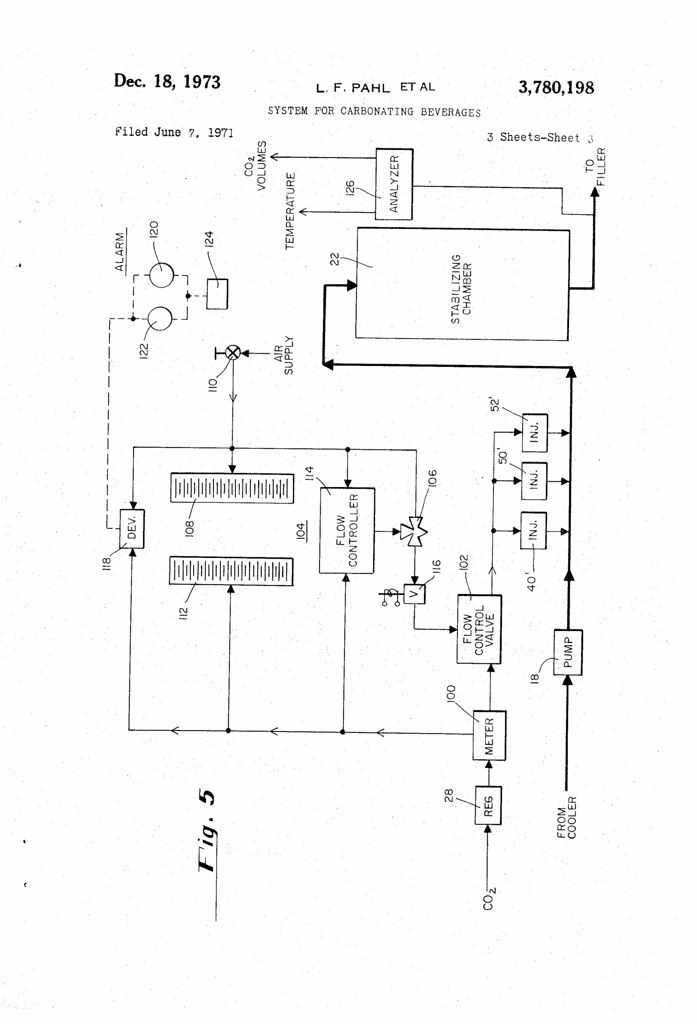 Today in 1900, US Patent 664227 A was issued, an invention of Alexander Plawin, for his “Beer Cooler.” There’s no Abstract, although in the description it includes these claims:

My invention relates to beer or liquid coolers; and its object is to provide a cheap and simple portable device of this character which can be conveniently carried by hand from place to place, so that it will be especially adapted for use on picnics and other outings when it is desired to have a barrel or keg of beer or other liquid and where no provision can be made for placing the barrel or keg directly on ice. 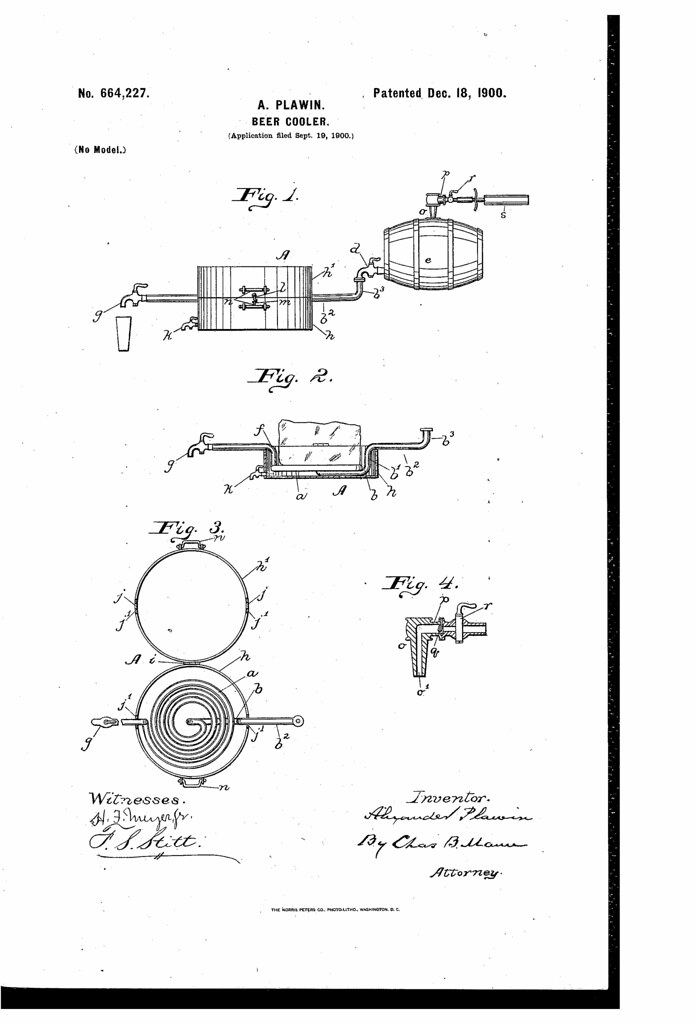 Today in 1871, US Patent 171204 A was issued, an invention of Lucien B. Woolfolk, for his “Improvement in Refrigerating Apparatus.” There’s no Abstract, although in the description it includes these claims:

This invention consists in so constructing the perforated compartment for containing the salt that it shall surround an opening in the top of the refrigerator, through which ice may be supplied to the refrigerator. The ice is forced down to its desired position in the ice and brine holder by means of a dasher. Overflow is guarded against by means of a waste-pipe, which extends from near the bottom to near the top of the vessel, and is of such form that the cold brine will be kept at one uniform level.

Figures 1 and 2, Sheet 1, represent my invention as applied to a Water-cooler, of which Fig.1 is a plan, with covers removed, and

Fig. 2 is a vertical section of same, taken through the center. Fig. 3 is a detached plan view of the dasher. Figs. 4 and 5, Sheet 2, represent my invention with a modification as applied to a refrigerator for cooling beer in the keg, of which Fig. 4 isa front elevation, showing a vertical section of the refrigerating apparatus. Fig. 5 is a plan with covers removed. 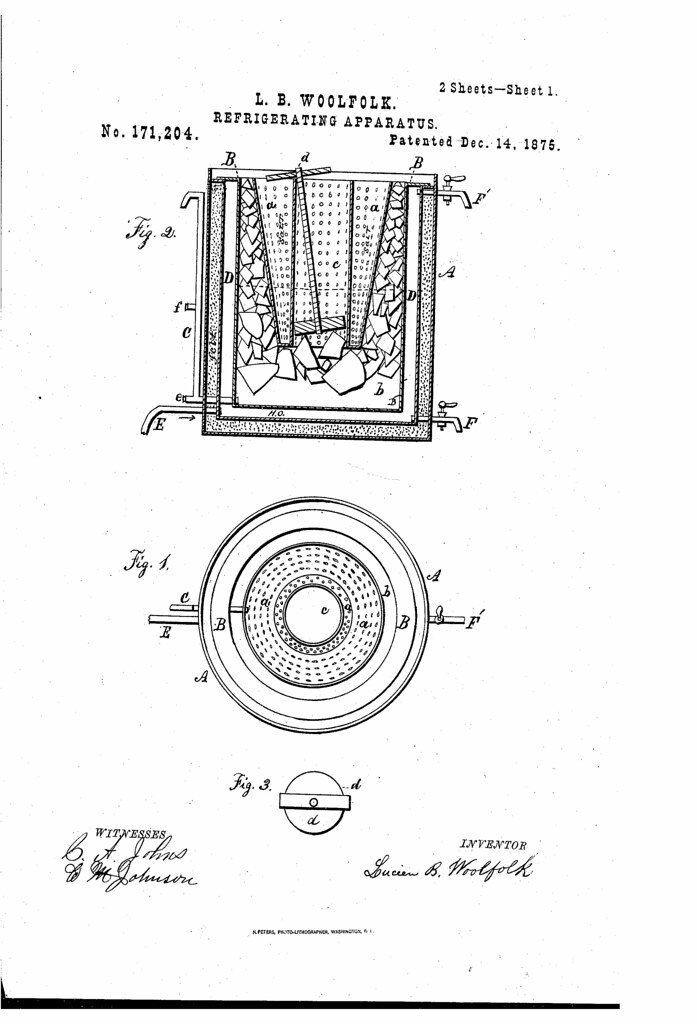 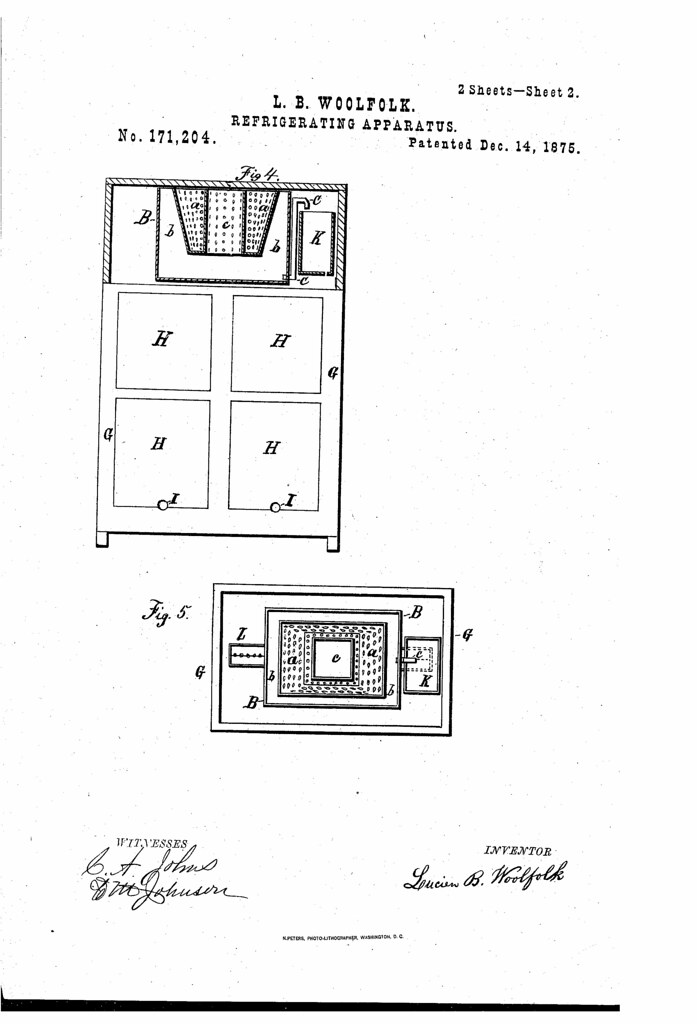 Today in 1965, US Patent 3223062 A was issued, an invention of Harry Mulder, assigned to the Firestone Tire & Rubber Co., for his “Bung Patch Plate Assembly Method.” Here’s the Abstract:

This invention relates to containers, such as single-walled metal beer barrels, and the method of construction of the same.

The primary object of the invention is to provide an improved patch plate assembly for reinforcing and protecting the bung opening.

One of the problems involved in the construction of a container having a single-walled thickness is to provide a protecting structure about the bung opening, through which the container may be cleaned, filled and drained. The bung opening also must be capable of withstanding the force exerted when the bung plug is driven therein.

Generally, bung patch plate assemblies around bung openings in beer barrels, for example, involve two separate walls or thicknesses of metal separated by a space, the latter being completely enclosed by the two metal walls. Normally, there is no opening leading to this space for the ingress or egress of liquids or gases. The two metal walls enclosing this space are sealed by the use of welds.

One or more of these welds, in prior art barrels are generally located so as to be in a position between the sealed space and the barrel cavity with the inner patch plate about the bung opening welded at its peripheral edges to the inside surfaces of the container. During the cleaning stages and prior to the filling of a single-walled metal beer barrel, it is inserted in a mold, filled with water and subjected to a pressure of approximately 900 lbs. per square inch in order to remove all dents to insure an exact volumetric capacity, and so that the barrel itself will present a more pleasing appearance. Therefore, it is not unusual that in the course of time and through other hard use, these welds sometimes become cracked.

When a crack occurs in a weld in the area between the enclosed space and barrel cavity, some of the beverage seeps into the enclosed space. The entrapped liquid decomposes and becomes extremely odious. When the containers or beer barrels are washed they are subjected to temperatures which vary greatly, the varying temperatures causing pressure changes within the enclosed space. These pressure changes cause seepages of the decomposed liquid from the space out of the crack in the weld( s) which seepages are not only offensive in smell and taste, but also are detrimental to the maintenance of high health standards.

The detection of a crack in a weld occurring in a location between the enclosed space and the beverage cavity presented a further problem. The crack could not be seen and usually the first time anyone knew of its presence would be because of the noxious smell. To repair such a crack it was necessary that one of the end shells be sawed off, the weld repaired from the inside of the barrel, and then the end shell placed back into position and secured by a fusion welding process. This was not only expensive, but was also time consuming in that the barrel generally had to be sent back to the place of manufacture or some other place where there were available facilities for so cutting and re-welding.

One of the objects of the invention is to avoid the above-mentioned problems by constructing the bung patch plate assembly so that there are no welds between the enclosed space and the beverage cavity.

Another object is to arrange all of the welds of the patch plate assembly on the outside of the container so that, in the event a weld does crack, the crack may be readily seen and repaired.

A further object of the invention is to provide a support within the space enclosed by the two metal walls designed to distribute over a wider area the stresses and strains occurring around the bung opening. 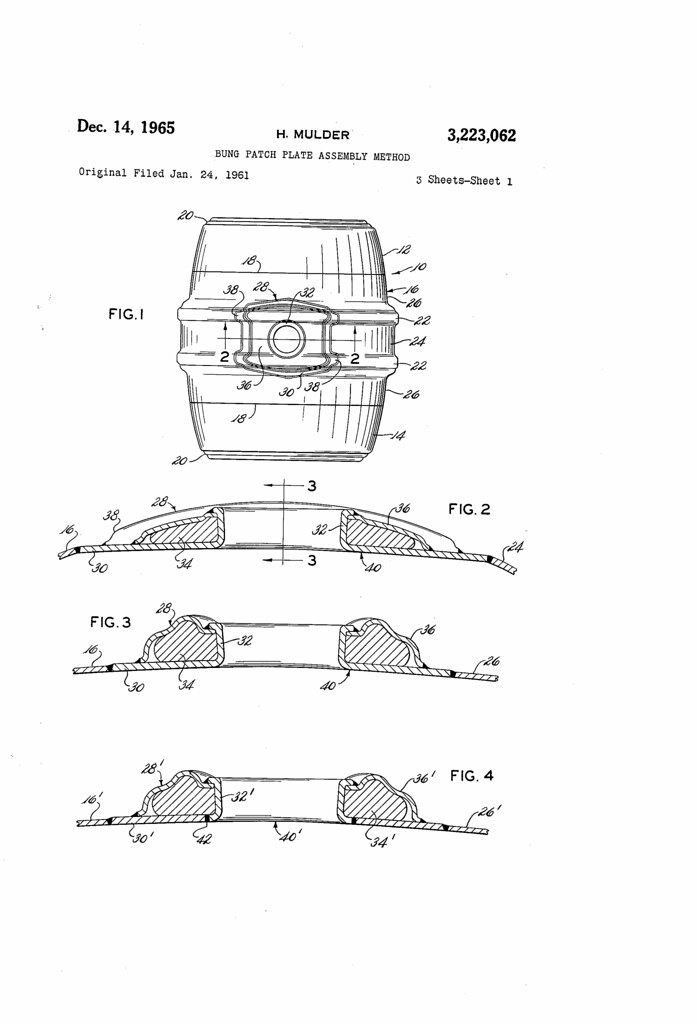 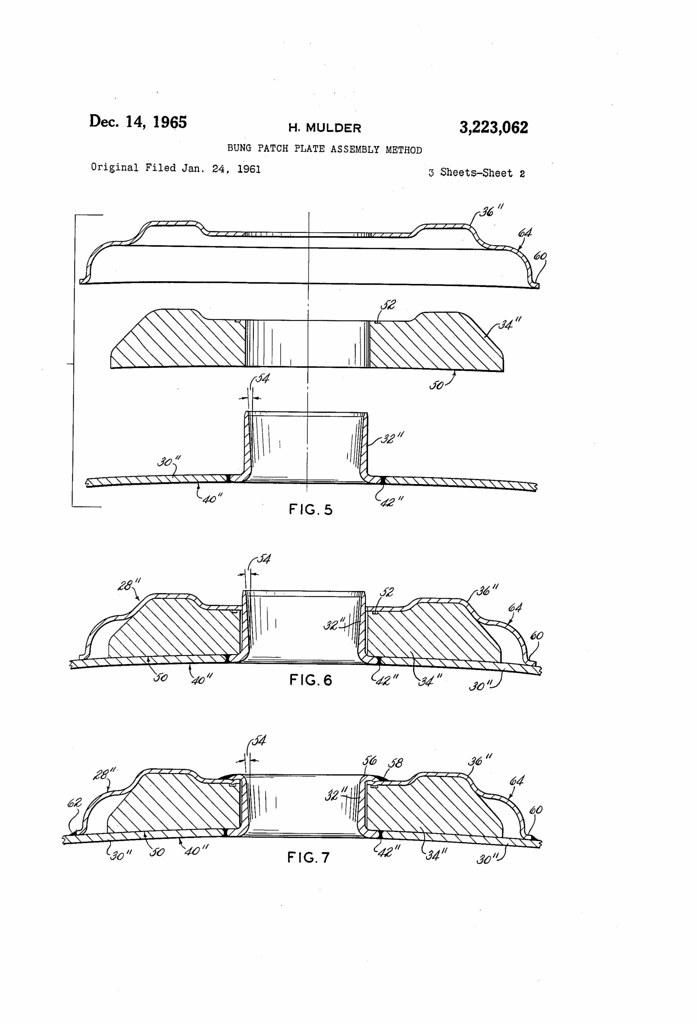 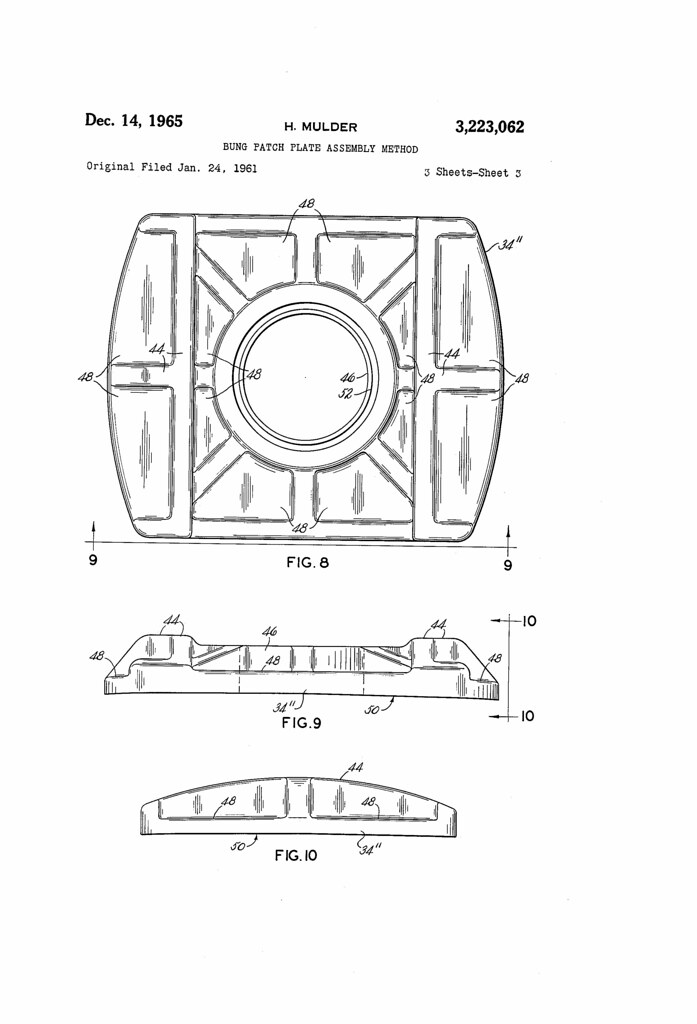 Today in 1892, US Patent 488144 A was issued, an invention of Wyatt Gibson, for his “Beer Cooler.” There’s no Abstract, although in the description it includes these claims:

This invention relates to improvements in beer-coolers, the objects in view being to pro- Vide a cheaply-constructed and simple cooling device for cooling beer or other liquids, to so arrange the parts as to permit of an easy handling of the keg containing the beer or other liquid, to permit of ready access to and separation of the parts for the purpose of cleaning the apparatus, and, furthermore, to adapt the same when not in use as a beer or other liquid cooler to serve as an efficient refrigerator or cold-storage chamber for domestic purposes. 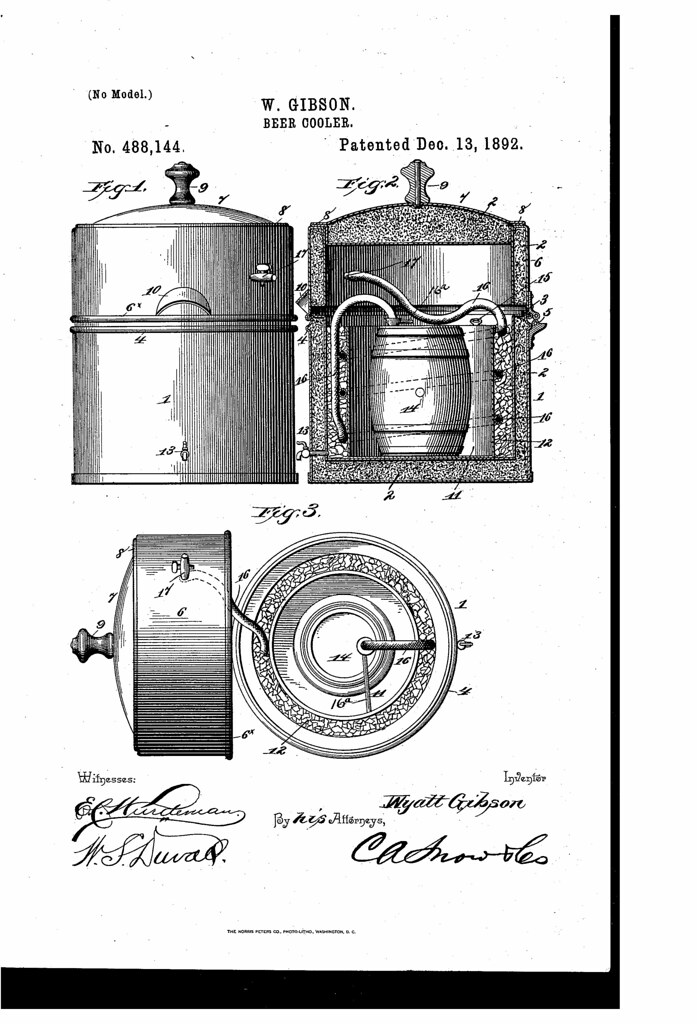 Today in 1911, US Patent 1011147 A was issued, an invention of Samuel E Bennett, for his beer keg “Valve.” There’s no Abstract, although in the description it includes these claims:

This invention relates to valves and more particularly to an air valve of that character used in beer drawing apparatus, and the invention has for its primary object to provide a valve of this character consisting of an attaching body adapted for connection to the beer keg and to an air hose or pipe, and a valve carrying casing removably engaged in said body.

A further object of the invention is to provide an air valve of this character of extremely simple construction, and one which is highly efficient and durable in use. 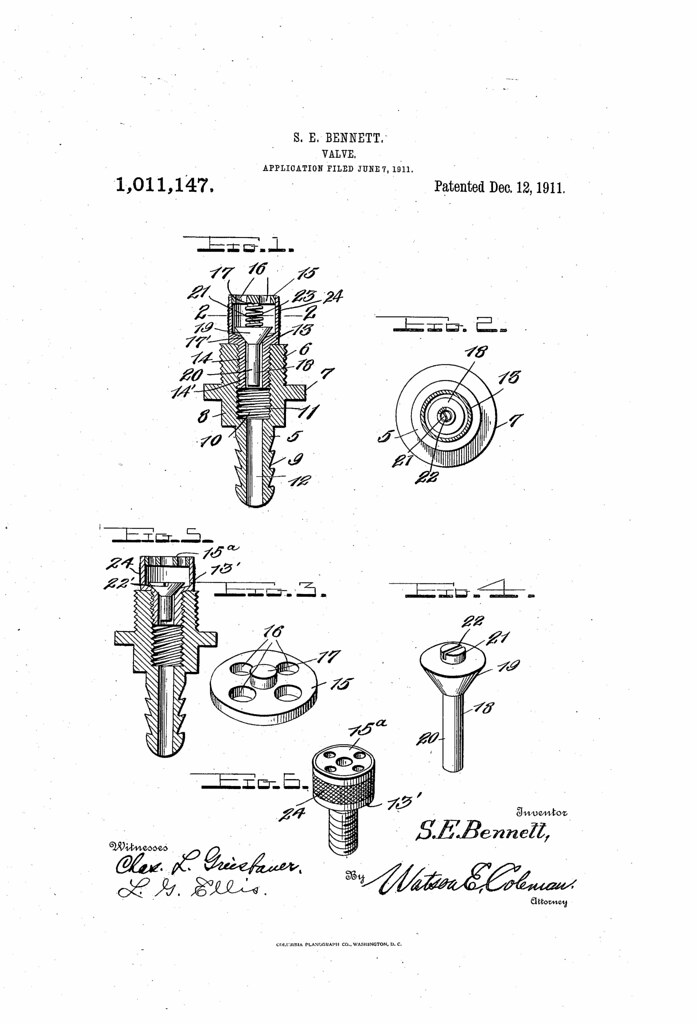 Today in 1894, US Patent 530827 A was issued, an invention of William R. Dales, for his “Beer Drawing and Saving Apparatus.” There’s no Abstract, although in the description it includes these claims:

The object of my invention is to produce an apparatus which enables beer to be readily drawn to fill a glass or other receptacle, and which has also an arrangement by which the froth may be sucked from the glass and delivered into a receptacle from which, after it settles, it may be withdrawn in the shape of merchantable beer. The apparatus thus provides for selling beer on draft in the usual way, while cans and such articles may be filled from the receptacle into which the froth has been delivered. To these ends my invention consists of certain features of construction and combinations of parts, which will be hereinafter described and claimed. 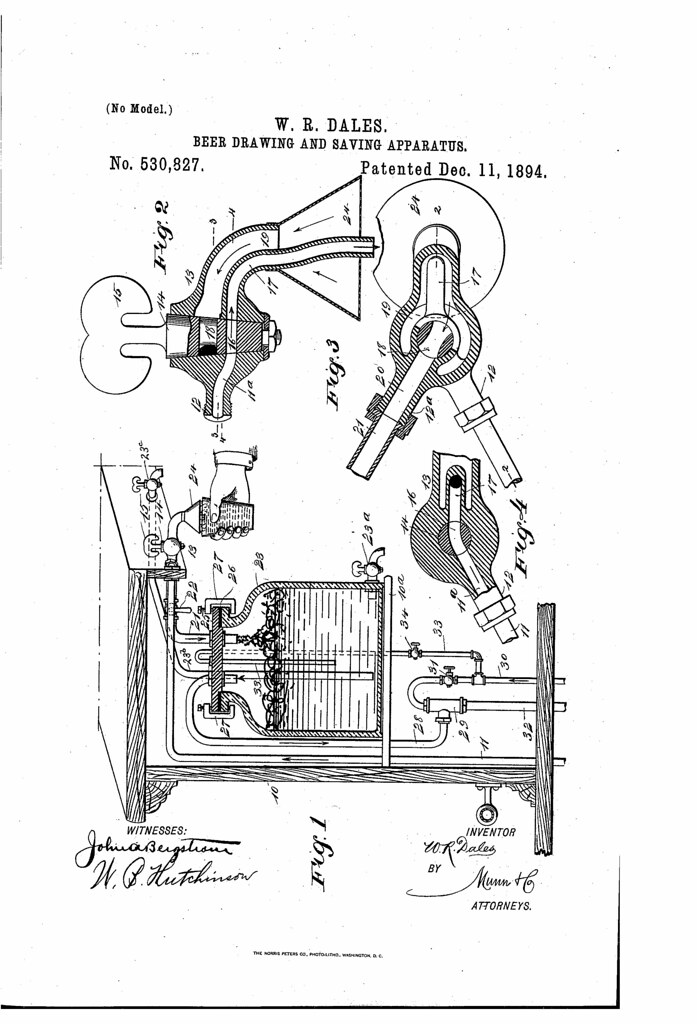 Today in 1895, US Patent 551167 A was issued, an invention of Henry A. Kobold, for his “Truck for Barrels or Other Vessels.” There’s no Abstract, although in the description it includes these claims:

My invention relates to a device for grasping kegs, barrels, casks, and other vessels having projecting flanges or rims at their ends like the chines of kegs and barrels, whereby the same may be conveniently and readily conveyed from place to place or raised and lowered along skids in loading and unloading without the necessity of touching the hands to them.

My invention has for its primary object to provide a device of this nature which Will be capable of readily grasping the vessel in such a manner that the latter may be easily rolled and guided to the desired place, the cylindrical form of the vessel being utilized in giving it locomotion. 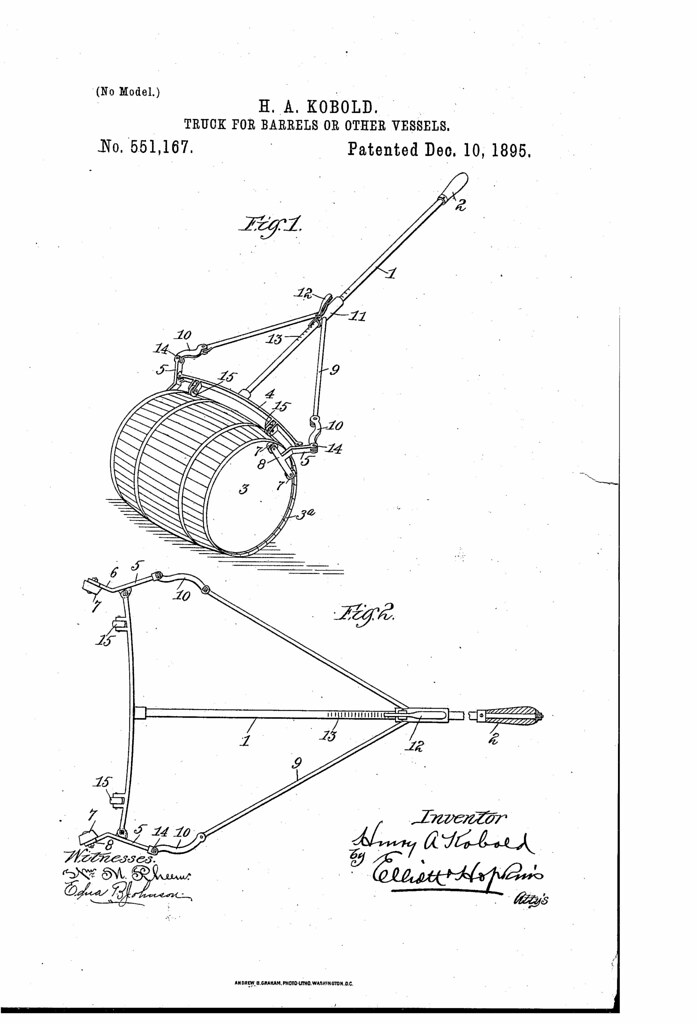