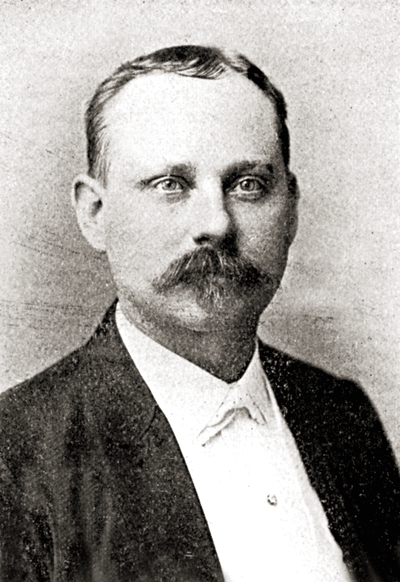 Today is the birthday of Henry C. Ramos (August 8, 1846-September 18, 1928). Ramos was born in Indiana, but moved to New Orleans when he was 41, in 1887. There, he bought and ran several prominent bars and invented the Ramos Gin Fizz, which is named for him.

Here’s a biography of Ramos from his Find-a-Grave page:

Henry RAMOS should be listed here as “famous.” Ramos came to New Orleans in 1887 and took over the Imperial Cabinet Saloon at Gravier and Carondelet downtown. In 1907 he purchased the Stag Saloon, near Gravier and St Charles. In the city that literally invented the first American cocktails, Ramos moved things forward with his invention of the Ramos Gin Fizz. Frothy, citrusy, smooth-as-silk. Demand for it was so high he employed 35 “shaker boys” during Mardi Gras 1915. Prohibition shut him down, but the cocktail reemerged after his death in the Roosevelt Hotel in New Orleans in the 1930s. The drink is still served at places in New Orleans like the Bar UnCommon, the French 75 Bar at Arnaud’s, at Cure and at all the Brennan restaurants.

In perhaps the most ironic twist in New Orleans cocktail history, the Ramos Gin Fizz was invented by a bar owner who actually was not a fan of drinking: Mr. Henry C. Ramos, known to his friends as Carl.  Ramos, originally born in Indiana, began his career in a beer saloon, called Exchange Alley, and worked the alcohol circuit in Baton Rouge for several years before deciding to invest in his own property in New Orleans with his brother as a partner.  The pair purchased the Imperial Cabinet in 1887, a bar located on Gravier Street in what is now the Central Business District.

Ramos was widely respected in the community and was considered to be a gentleman of the highest quality; he ran his bar to reflect this.  He closed his bar every evening at the decent hour of 8 o’clock to discourage all-night drinking binges and was open for a mere two hours on Sunday afternoons and only then because the community begged it.  The Imperial Cabinet was upheld to strict standards of temperance and morality, accepting only the most well-behaved of clientele. Ramos was known to spend his time conversing with his patrons in order to keep an eye out for anyone who was toeing the line of tipsy.  He hated drunkenness and ensured that any unruly patrons were pointed out to the bartenders so that no further drinks would be served.  The 1928 New Orleans Item-Tribune states that “nobody could get drunk at the Ramos bar, not only because old Henry wouldn’t let them, but because drunkenness would take away their appreciation of the drinks.”

It was in this culture of quality over quantity that the Ramos Gin Fizz was created by Ramos himself in 1888.  Originally called the ‘New Orleans Fizz’, the drink became an immediate hit and the Imperial Cabinet became busier than ever.  Ramos’s original recipe included a sprinkling of powdered sugar and stipulated that the cocktail must be shaken for 12 minutes before serving, quite the undertaking for any skinny-armed bartender.  Because of the rigorous shaking needed and the popularity of the drink, Ramos had up to 20 bartenders working at any given time.  These gin fizz makers were called ‘shaker boys’ and often rotated in relay lines to share the burden of shaking the cocktail.  The drink became so popular that during the Mardi Gras season of 1915 it was said Ramos had to employ 35 bartenders just to keep up with the number of New Orleans Fizzes ordered.

Ramos was said to have served his last gin fizz at midnight on October 27th 1919 as he became an avid supporter of Prohibition and firmly closed the doors of the Imperial Cabinet.  Even after leaving the alcohol business, Ramos guarded the cocktail’s recipe up until his death, revealing it to the New Orleans Item-Tribune only days before he passed in 1928.  He included in his recipe that “the secret in success lies in the good care you take and in your patience, and be certain to use good material.”

Today, there is even a brand of gin named for Henry Ramos, produced by the Sazerac Company.

Today in 1902, US Patent 698184 A was issued, an invention of James Franklin Duffy, for his “Method of Refining, Aging, Mellowing, and Purifying Alcoholic Liquors.” Although it’s not strictly speaking, a beer patent, it is somewhat related, and it was too interesting not to include. There’s no Abstract, although in the description it includes this summary:

My invention relates to a certain improved method or process for the treatment of liquors in the same particulars as is usually accomplished through a considerable period by the ordinary aging process.

Under the term liquor as used herein I include all alcoholic or spirituous fluids, either distilled or fermented; and it is the purpose of the invention to purify said liquors,to eliminate all injurious qualities therefrom, and to supply the ripe, pure, and mellow qualities which time alone has done heretofore.

The invention consists in the treatment of the liquor by means of the various steps of the process, all of which will appear from the description and be clearly pointed out in the claims. 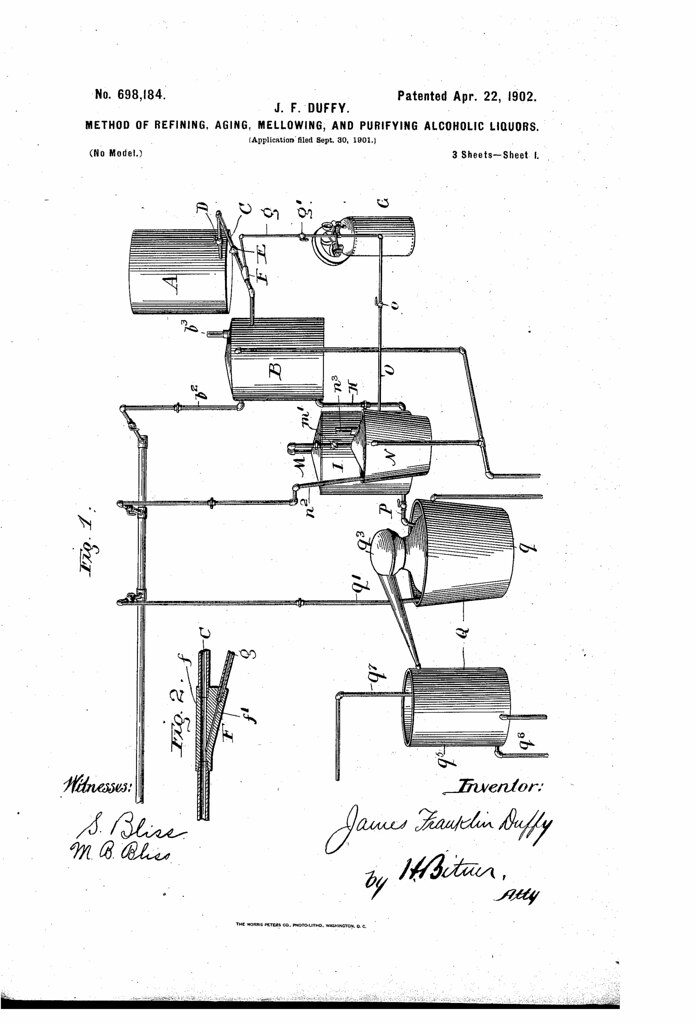 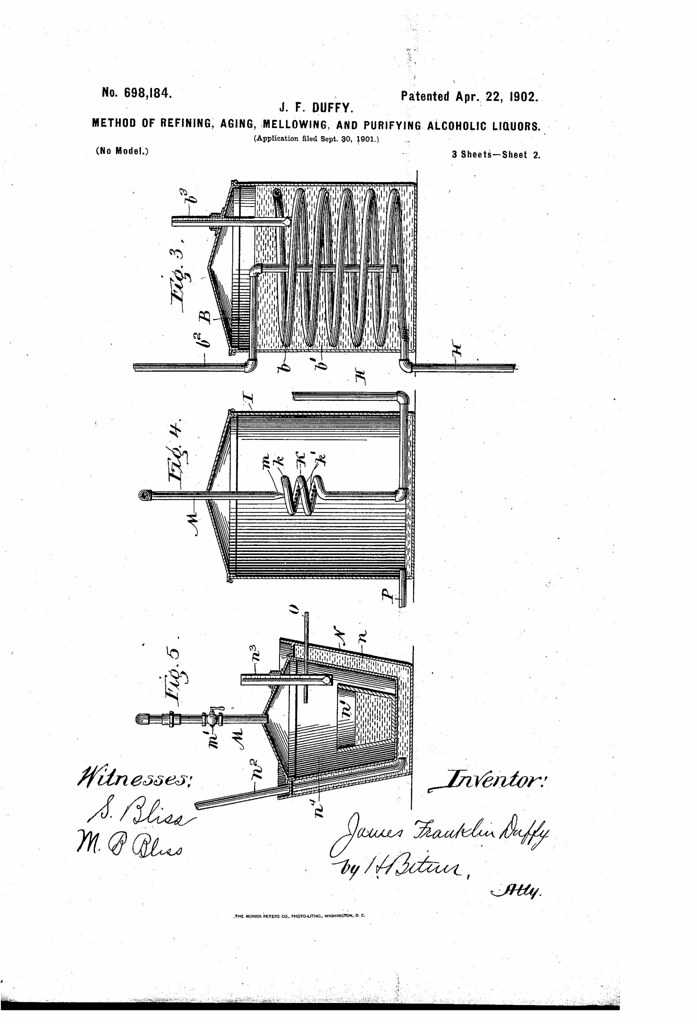 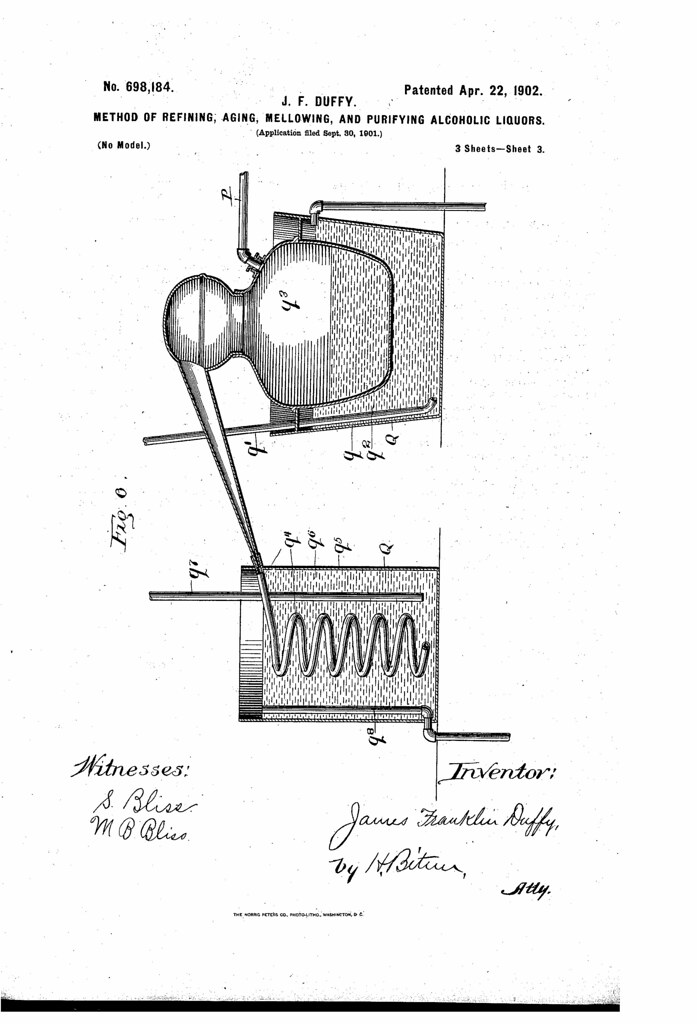 Today in 1882, US Patent 2356545 A was issued, an invention of Marshall J. Allen, for his “Process of Making Whisky (from Spent Beer).” There’s no Abstract, although in the description it includes this summary:

In all those methods of making whisky in which the entire grain introduced passes through the entire process and is delivered as a refuse product at the end of the operation The sheet of drawings hereto annexed rep resents a general View of a part of a distillery arranged for the practice of our improved process. We do not limit ourselves, however, to the special apparatus for carrying out the process, but show one form of apparatus by which it may be carried into effect. We shall not go into detail in the description of this apparatus, as the arrangement will be easily understood by those acquainted with the art.

By “preparing the refuse product,” he means what they call “spent beer,” which I further assume he means “spent grain,” though to be fair I’m not quite sure. A little later in the description, they explain it somewhat better:

It is well known that the spent beer contains in suspension, in the first place, a considerable amount of refuse material of comparative large size such as the chaff, bran, and larger particles of grain and, in the second place, minute particles of sugar or glucose, starch, and yeast. This second class of parti- 7o cles it is very important to preserve and introduceinto the subsequent operations of whisky-making. This second class of particles are so minute as that they will pass through the meshes of a fine sieve, and yet are sufticiently solid and separate from the liquid to form a deposit in any vessel in which the liquid may remain at rest. The purpose of our invention is to retain these fine or valuable particles in the liquid which is to be returned, and to separate from this liquid the coarse or refuse particles, while at the same time the liquid is maintained in a sweet condition. 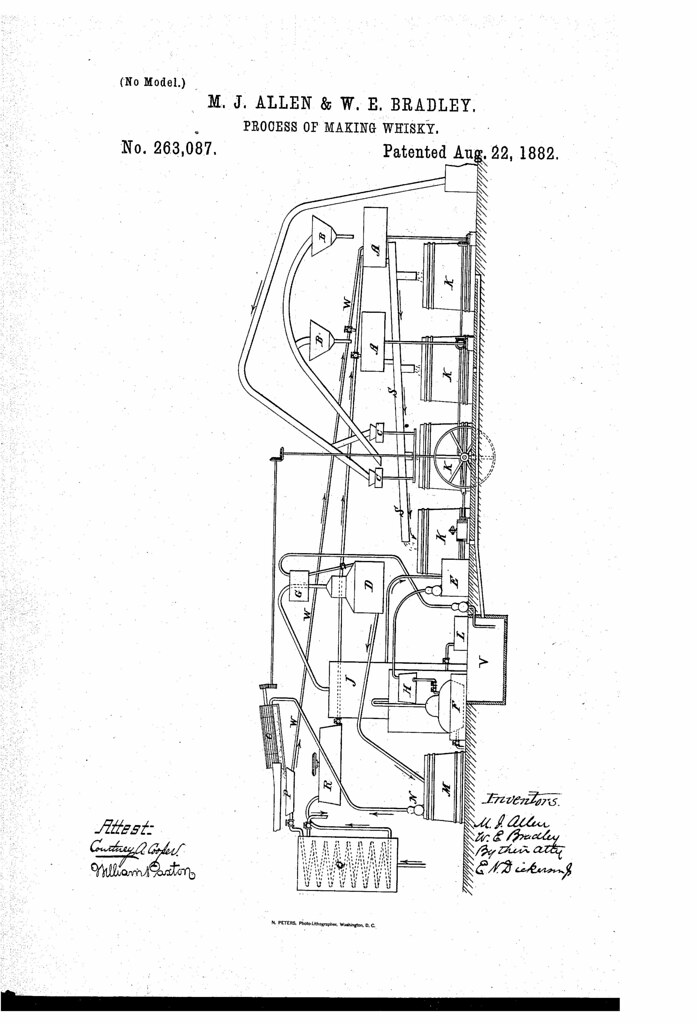 This morning Jonathan Surratt alerted me to a fun tool that Google has available, known as Google Trends Explore. You can use it to compare trends in virtually any search term and even topics (which is in beta). Jonathan was comparing “craft beer” to things like potato salad and mashed potatoes, but you can do all sorts of comparisons. So just for a bit of fun, I tried a few different ones. Most are comparing searches, but a few measure topics. Five is the most comparisons you can do at one time, but that still allows for some interesting pairings. In each case, the charts show the trends from 2004 through the present, which is over ten years of data.

First, here’s the difference between craft beer vs. beer. Just beer is beating the pants off modified beer. Good. 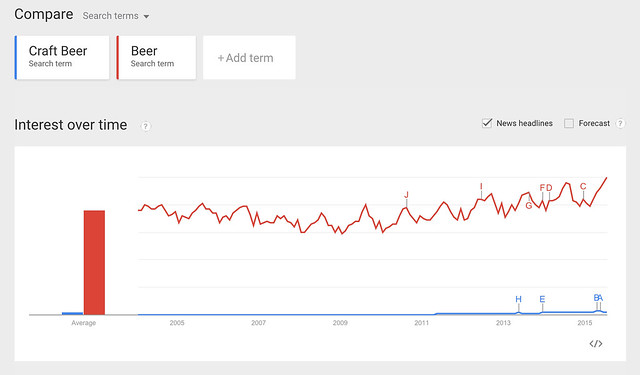 Here’s Craft Beer, Beer and Wine compared. Wine is leaving us in the dust. 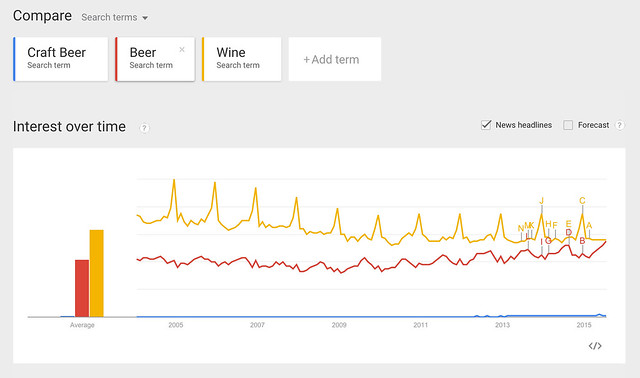 And here’s just beer and wine. But it’s not that far apart and we are gaining on them. 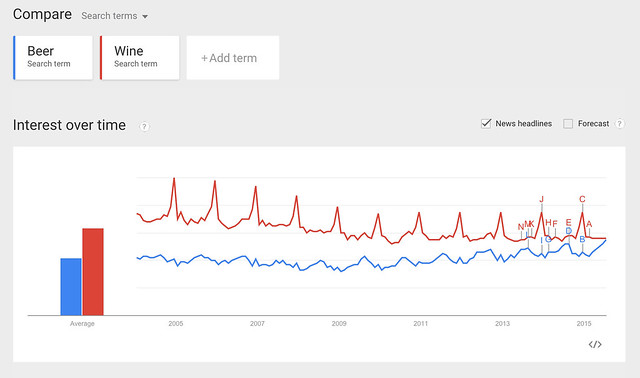 And this is beer vs. wine, but by topic instead of by searches. By topic it’s closer still, and we’ve even come up on top a few times closer to the present. 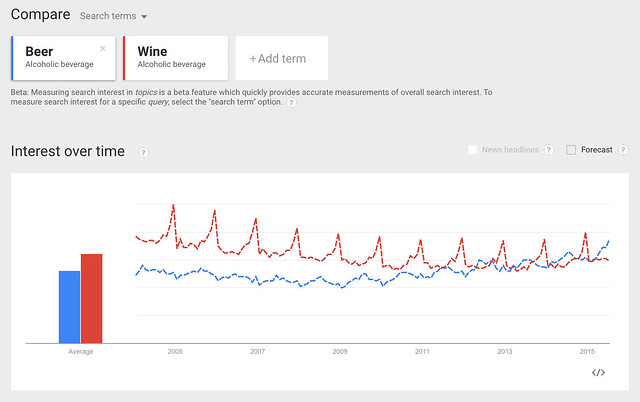 Here’s beer compared to four popular spirits. Vodka, not surprisingly, is leading the tightly packed spirits, but beer is besting all of them pretty handily. 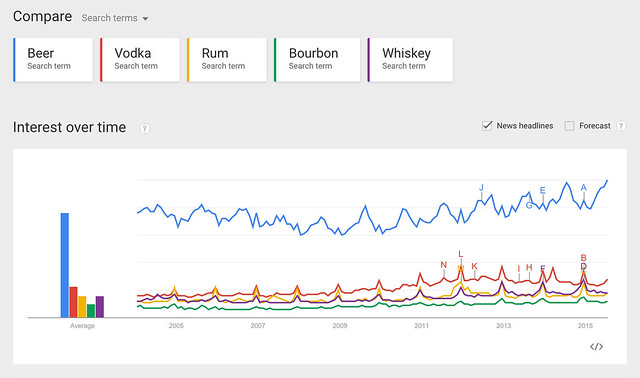 And here’s five of the most popular beer brands. 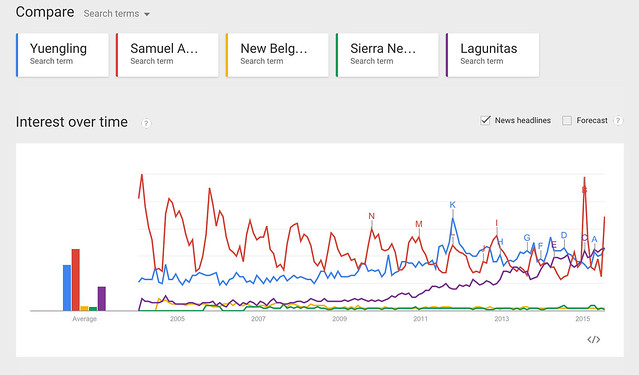 This is the same five beer brands but by topic. 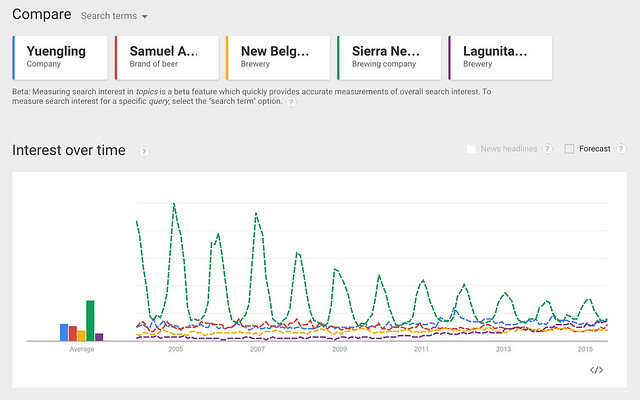 The recent news that MillerCoors a bourbon-like lager called “Miller Fortune” is not as unexpected as many people seem to think. In fact it, and some of the reasons behind the new beer, were known last year. For example, AdAge had an article in September of 2013, Draft Dodging: Why Big Beer Is Going Flat, and subtitled “And What Industry Giants Are Doing to Get Their Buzz Black.” The article was in part a roundup of talk at the NBWA meeting earlier that month in Las Vegas, and discussed the many challenges big beer was facing as overall beer sales were falling. Check out the section near the end of the piece entitled “Liquor is Winning” which provides an overview of reasons that spirits are taking market share from beer. The mega beer brands were already then plotting their next move “with higher-alcohol extensions targeting nighttime drinking occasions.” They went on to mention that “MillerCoors next year will launch Miller Fortune at 6.9% alcohol by volume (compared with 4.2% for most light beers), following the 2012 launch of Bud Light Platinum, which checks in at 6%.” Now that it’s here, we’re closer to answering the question posed by that article. “Will these strategies bring the sexy back to beer?” Back in September they said it was “too soon to tell,” but I think we’ll soon know. What do you think? Is this going to change big beer’s fortunes?