I’m an unabashed lover of animation, which is why I always bristle when the neo-prohibitionists invariably complain when a cartoon is used to sell beer. They always argue that cartoons appeal only to children, and seem to forget that adults love them, too. Many of the most famous cartoons we love were originally made for adults, to be shown before feature films at the theater in the days before television. It wasn’t until the advent of TV, I’d argue, that the split began between cartoons for kids and for adults.

Anyway, I recently was looking for and found a bootleg DVD of old Quisp & Quake commercials, which were created by Jay Ward, famous for Rocky & Bullwinkle, among much else. And, yes, I am that much of an animation geek. Anyway, I also discovered at the same website, something I hadn’t previously known about: a Hanna-Barbera made Flintstones cartoon done in 1967 for an Anheuser-Busch distributor meeting or convention. I promptly ordered that as well. 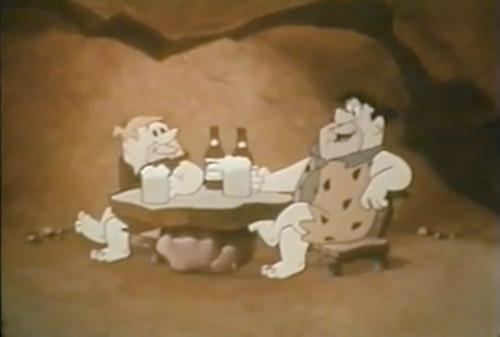 It’s a little over 19 minutes, shows some upcoming television and radio spots for Busch Bavarian Beer, but also includes a mini-Flinstones story, too, that begins when Fred and Barney lose their jobs and go to a bar to drink Busch beer. It appears aimed at distributors, and possibly retailers, to show what advertising will be used in 1967 to support the brand and help it continue to be successful. There’s some great old adspeak in the video, where the narrator talks about “advertising that moves the consumer to Busch” with what they call — and they say in hushed tones implying it’s a new term — “Target Advertising.” But here’s my favorite. “We used words that beer drinkers understood.” That had me laughing out loud. What exactly are the words that beer drinkers understand? Are they small ones? Simple ones? Ones without too many syllables? 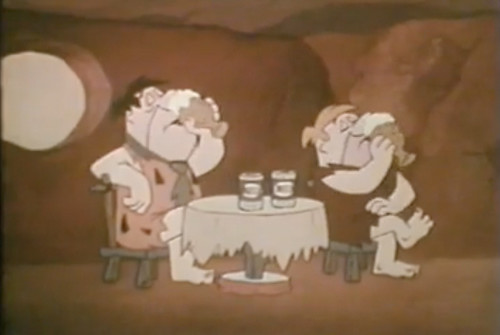 After a few minutes of a Flintstones story, going to the bar, then back home, the boys return again to the bar. The bar’s name is actually “Tavern-Type Inn Bar Grill Lounge Pub Saloon.” They agree to take over for the bartender and serve some Busch beer, then watch a video within the video that’s aimed at the distributors and talks about advertising plans for 1967. Apparently last year’s slogan was “you can’t say beer better than Busch” and the new one will be “when you’re due for a beer, Busch does it!.” 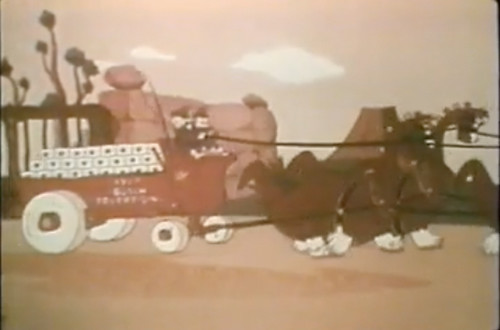 I think my favorite part of the video is when the beer wagon comes out of the A-B gate, pulled by Clydes-dinos. After the video, the 5:00 whistle sounds and Fred and Barney have to go back to work serving Busch to the after work rush. When they’re done, they talk about what hard work it was, and they throw out this bon mot, which must have delighted the crowd. “It takes know how to work in the beer business,” to which Fred replies “yeah, and we got no know how, no how.” Eventually, their boss from the gravel pit, Mr. Slate, comes in the bar and they get their jobs back, of course, wrapping up the story arc from the beginning.

It’s a fun cartoon, especially for the beer geek, and I can’t imagine how expensive it must have been to get Hanna-Barbera, one of the premiere animation studios at that time, to do an industrial film for them. Happily, you don’t have to go out and buy a copy of it like I did, but can watch it right here, because I found it on YouTube, separated into two parts. Enjoy.