You are here: Home / Beers / What 3,465 Breweries Are Doing To The Hop Supply

I admit there’s a certain “duh” factor to this, but it’s still interesting to see the numbers. With IPA and other hoppy beers accounting for over 20% of the craft beer market, there’s not enough hops being grown to keep up with current demand, and it will only get worse as interest continues to grow, as it seems likely the popularity of hoppy beers will be with us for the foreseeable future. This is from the May 2015 issue of Popular Science, which has a short article entitled Craft Beer is Annihilating the Hop Supply, which adds that demand for hops has “nearly quadrupled in the past decade.”

The article is subtitled “why that might be a good thing,” presumably alluding to the increased demand, but never really answers that question satisfactorily. There’s a quote from the former director of the Hop Growers of America, Doug MacKinnon, saying “Craft brewing is sucking up every pound of hops in the U.S. Growers can’t expand fast enough,” and suggesting that’s opening up the market beyond Washington, Oregon and Idaho, where U.S. hop growing has been concentrated at least since prohibition ended.

The article cites as proof that “single-acre hop operations are popping up on other types of farms across the country, including “Growers in New York, Minnesota, and Colorado,” and I’m also aware of similar efforts with commercial farms in Maine, Wisconsin and California, and I’m sure I’m forgetting somebody. Hops-Meister, which is near Clearlake, started in 2004 and grows ten different varieties on at least 15 acres. Co-owner Marty Kuchinski will be talking to my class tonight about hop farming. California used to grow more hops than any other state prior to prohibition, but never rebounded as farmers here found they could make more per acre growing grapes, but it’s why that legacy includes the town of Hopland and the Hop Kiln Winery. And New York used have an entire hop industry in the 19th century, until a downy mildew problem and other issues forced many to move production out west. So it’s little surprise that, with more modern farming methods, this growing demand would bring back hop farming to many parts of the country, not to mention a strong desire for brewers to have more local ingredients. 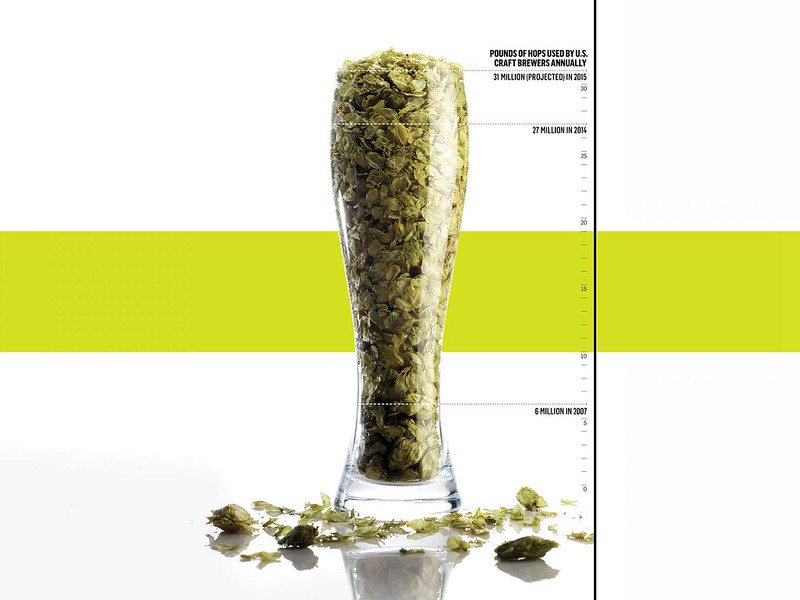