Friday’s ad is for Miller High Life, from 1952. Showing a woman dressed for golf, with almost no waist, including a hat with tees built in. At the top of the ad is a still life of an assortment of “womanly” items, with a beer bottle and full glass dead center. 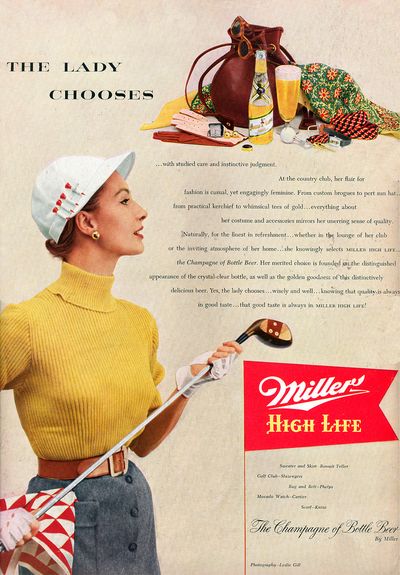 That the neo-prohibitionists are rife with propaganda is well documented, but this one may take the cake. A new study at John Hopkins, conducted by David Jernigan, appears to show that Budweiser is the most popular drink “most commonly linked to emergency room visits.” Apparently “Budweiser has 9.1 percent of the national beer market, and represents approximately 15 percent of the E.R. ‘market.'” After Bud, it was “Steel Reserve Malt Liquor, Colt 45 malt liquor, Bud Ice (another malt liquor), Bud Light, and a discount-priced vodka called Barton’s.” Another malt liquor brand, “King Cobra, account[s] for only 2.4 percent of the U.S. beer market, but accounted for 46 percent of the beer consumed by E.R. patients.” The conclusion, as reported by NBC News, was that “[o]verall, malt liquor and lower alcohol beer dominated consumption but vodka, gin, brandy and cognac were overrepresented, too.”

But despite all the attention and scary statistics and headlines — Alcohol Justice gleefully tweeted the headline Budweiser to Blame for Most Alcohol-Related ER Visits — the study itself is absurd. The story Sherrif A.J. retweeted was from Science World Report, and despite the headline, the story doesn’t back up the sensationalist tone of it at all. The “study,” if we can even call it that, consisted of giving a survey to 105 people at one inner city Baltimore E.R., in a predominately African-American neighborhood.

The study was done by David Jernigan, who in addition to being an associate professor in the Department of Health, Behavior and Society at the Johns Hopkins Bloomberg School of Public Health, is more importantly the director of the Center on Alcohol Marketing and Youth (CAMY), a notoriously anti-alcohol organization. That affiliation is not disclosed in any of the reports on this particular “study.”

Curiously, he does admit that both the Federal Trade Commission and the National Institute on Drug Abuse both told him personally that “this kind of research cannot be done.” Did he listen? Nope, he went right ahead and jumped to all sorts of conclusions, even though there’s no clear cut causality here whatsoever. And look how they conducted the study, and persuaded people to participate:

By using a drop down menu on a small notebook computer, the survey takers managed to obtain information from patients, and to include about 400 brands, in less than five minutes. At first, Jernigan, said, many patients refused to talk. But then the survey takers, with the permission of the emergency room staff, donned white coats. After that, patients talked freely.

See what they did? They put on white lab coats, so they looked like they worked there or were E.R. doctors, and tricked people into answering. Nice.

But the news was reported that, in fact, the conclusions were sound, especially in the headlines, which is only what a majority of people will see. The problems with the study, its limitations and lack of causality is buried toward the end, well after most people stop reading. The fact that it was done by essentially a neo-prohibitionist organization is never mentioned at all. And that certainly didn’t stop Johns Hopkins from issuing a press release. The study itself was published in the journal Substance Use & Misuse, under the title Alcohol Brand Use and Injury in the Emergency Department: A Pilot Study. But none of that stopped anybody from spreading the news about how Bud, and the other brands, are directly responsible for people visiting the E.R. It couldn’t be any other reason, right?

Today’s infographic was created by About.com Health, showing a broad overview of a few facts about — no pun intended — beer. They probably should have gotten Bryce Eddings, who writes About.com’s beer website, to help, as he most likely could have improved it.