Between 1951 and 1953, P. Ballantine and Sons Brewing Company, or simply Ballentine Beer, created a series of ads with at least thirteen different writers. They asked each one “How would you put a glass of Ballantine Ale into words?” Each author wrote a page that included reference to their beer, and in most cases not subtly. One of them was Ernest Hemingway, who wrote several memorable novels, such as the The Sun Also Rises, A Farewell to Arms, For Whom the Bell Tolls and The Old Man and the Sea.

Today is the birthday of Ernest Hemingway (July 17, 1899–July 2, 1961). He “was an American novelist, short story writer, and journalist. His economical and understated style had a strong influence on 20th-century fiction, while his life of adventure and his public image influenced later generations. Hemingway produced most of his work between the mid-1920s and the mid-1950s, and won the Nobel Prize in Literature in 1954. He published seven novels, six short story collections, and two non-fiction works. Additional works, including three novels, four short story collections, and three non-fiction works, were published posthumously. Many of his works are considered classics of American literature.” His Ballantine ad ran in 1952. 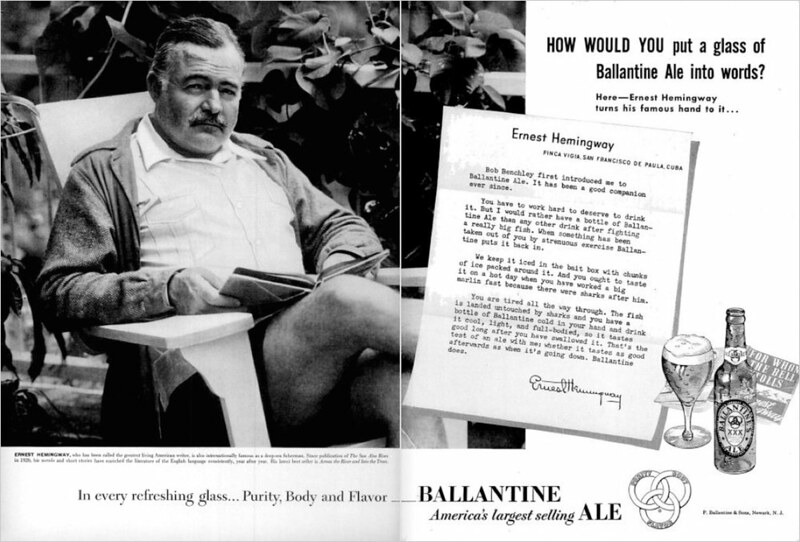 His piece for Ballantine was done in the form of a letter on fishing, written from Cuba:

Bob Benchley first introduced me to Ballantine Ale. It has been a good companion ever since.

You have to work hard to deserve to drink it. But I would rather have a bottle of Ballantine Ale than any other drink after fighting a really big fish.

We keep it iced in the bait box with chunks of ice packed around it. And you ought to taste it on a hot day when you have worked a big marlin fast because there were sharks after him.

You are tired all the way through. The fish is landed untouched by sharks and you have a bottle of Ballantine cold in your hand and drink it cool, light, and full-bodied, so it tastes good long after you have swallowed it. That’s the test of an ale with me: whether it tastes as good afterwards as when it’s going down. Ballantine does. 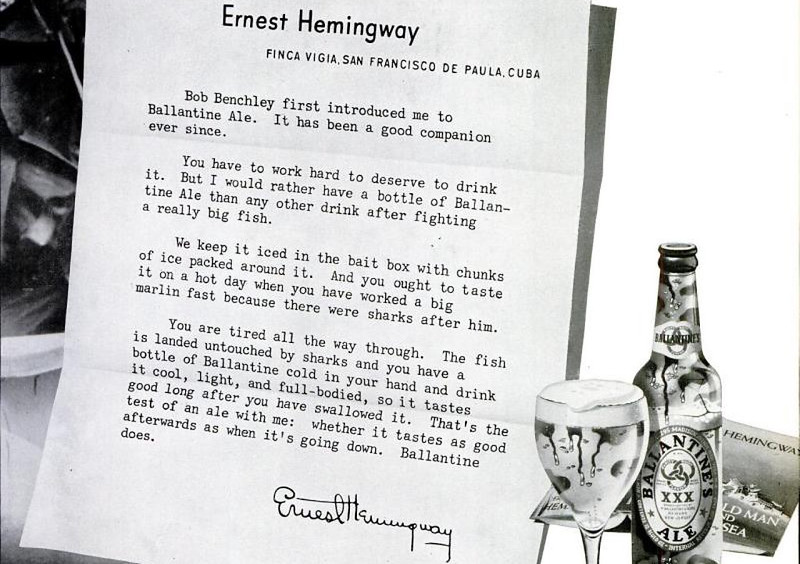