Tuesday’s ad is from the English brewer’s “Beer is Best” campaign, from 1951. The campaign began in 1933, and ran for 30 years, and this one shows an idyllic country pub — The Axe and Compass — with a conspicuous church spire behind it. It almost appears that they’re trying to either suggest the pub as church or to associate the two as central to British life (both claims I agree with, BTW). But it looks so perfect one assumes it has to be a fictional, stylized version meant to invoke the romance of the country pub. 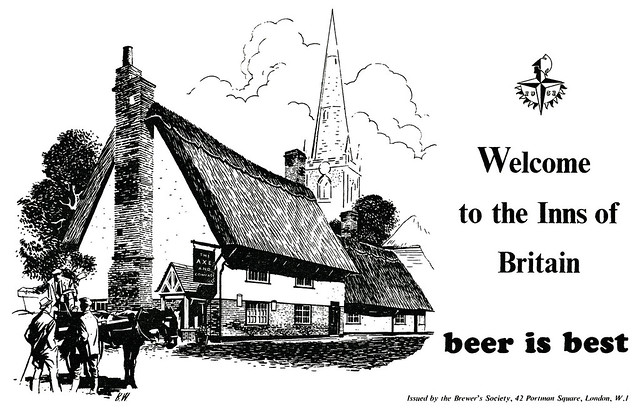 But not so fast. The Axe and Compass is an actual country inn located in Hemingford Abbots, 3 miles from St Ives, 6 miles from Huntingdon, and 12 miles from Cambridge. According to their website, the pub dates “back to the 15th century.”

But perhaps the artist did take a few liberties with perspective. That church spire that looms so large in the ad’s illustration appears much less imposing in the photograph from the pub’s website. And even more revealing, placing the inn at roughly the same angle as the drawing using Google Maps Street View, you can barely make out just the tip of the spire above the edge of the end of the pub’s roof past the back chimney. You have to go down Church Lane to see the church, and it doesn’t look nearly as large as it does in the illustration. Still, it’s an awesome image and I suspect it may have been one in a series, which would be even cooler. I know I want to go there now, and if I’m ever in the area, I’d definitely try to have a pint of Timothy Taylor there. 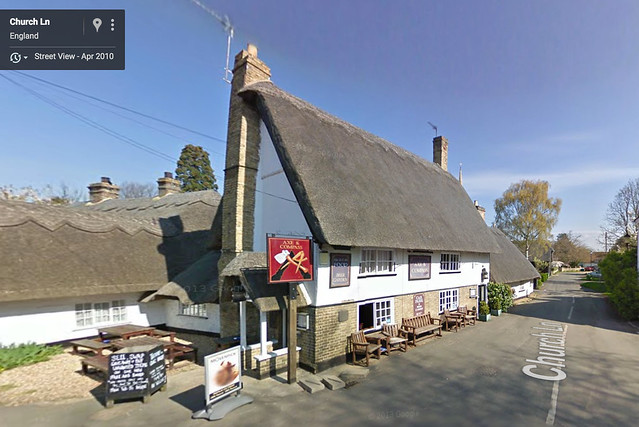