You are here: Home / Beers / Call It Session Beer Day

If you’re on the internet, Twitter or Facebook today, you’ll no doubt have noticed that people are saying it’s National Beer Day. And it is, but only in the sense that somebody decided to call it that, and lots of people agreed to it, as well. Which is exactly how every holiday got started. But the day should, I think, make sense. April 7 was chosen because it was the day that beer was first available after prohibition ended. Or at least that’s what a lot people believed, and continue to believe. Some even still call April 7 “Repeal Day.” But, of course, it wasn’t. When Franklin D. Roosevelt took office as our 32nd president on March 4, 1933, he quickly got to work on one of his campaign promises: to end prohibition.

I recommend to the Congress the passage of legislation for the immediate modification of the Volstead Act, in order to legalize the manufacture and sale of beer and other beverages of such alcoholic content as is permissible under the Constitution; and to provide through such manufacture and sale, by substantial taxes, a proper and much-needed revenue for the Government. I deem action at this time to be of the highest importance.

The very next day, Representative Thomas H. Cullen introduced the proposed legislation in the House of Representatives. Senator Pat Harrison did likewise in the Senate. It easily passed both houses, and was sent to committee on March 20. The re-worked combined document was approved by the Senate later the same day, while the House approved it the following day.

On March 22, FDR signed the Cullen-Harrison Act, which amended the Volstead Act and specifically “27 U.S.C.: Intoxicating Liquors,” creating § 64a et seq., allowing for the manufacture and sale of low-alcohol beer, which they defined as 3.2% alcohol by weight (which by the more common standard today, is beer that’s 4% by volume or abv – technically 4.05%). When he signed the legislation, FDR is reported to have quipped. “I think this would be a good time for a beer.”

According to the act, each state then was free to pass it’s own similar legislation and allow 3.2 beer to once again be available. Twenty-one of the states, including California, along with the District of Columbia, took the federal government up on the offer, and passed their own laws to allow low-alcohol beer. The new law took effect on April 7, 1933. 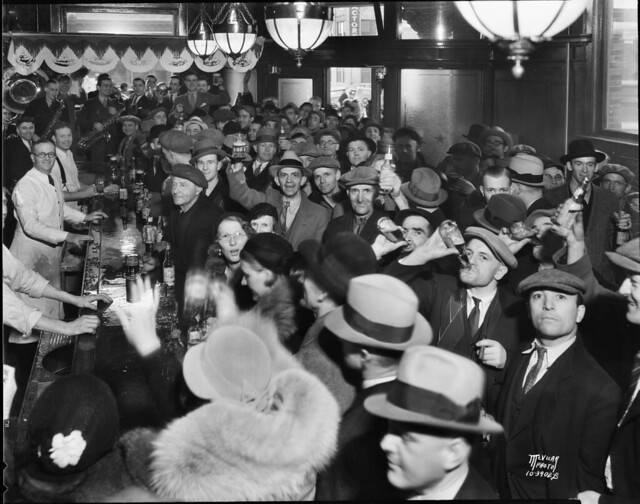 A raucous crowd celebrating the return of 3.2 beer at the Fauerbach Brewery tavern in WIsconsin on April 7, 1933. They even had a small band playing in a corner of the bar.

So people in those states were pretty thrilled about being able to legally drink beer again for the first time in thirteen years, longer in some states, even if it was only weaker beer. Celebrations were held around the country. Since most breweries knew once FDR took office that beer would likely be back, they started brewing at least by March 22, when the law was signed, so that beer could be ready for early April. This was also the beginning of one of the most well-known marketing strategies, when Anheuser-Busch president Gussie Busch sent a team of clydesdale horses pulling a beer wagon first to present beer to New York governor Al Smith and then down Pennsylvania Avenue in Washington, D.C. to deliver beer to present Roosevelt. 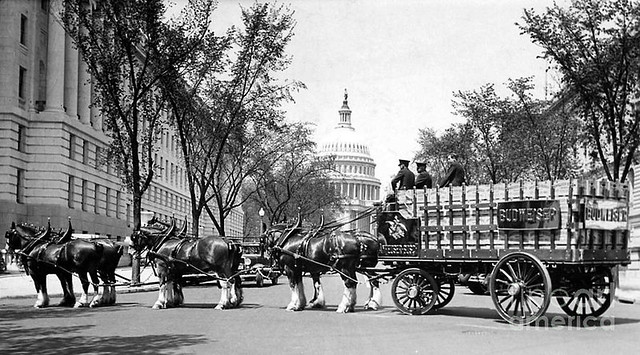 In the run-up to April 7, people in those twenty-one states started getting pretty excited and started calling the impending day names like “Beer is Back Day” and “Brew Year’s Day” or “New Beer’s Day.” What they didn’t call it was “National Beer Day.” That day would have to wait until December 5, 1933, when Utah ratified the 21st Amendment, the 36th state to do so, and making it the law of the land. The 21st Amendment repealed prohibition and made it possible for beer and wine of all strengths, along with spirits, to be legal again in all 48 states, whereas in April only 21 states legalized some beer, but only if they were low in alcohol. In fact, it wasn’t until 2009 that a man in Richmond, Virginia, who, at the urging of a friend, conceived of calling April 7 National Beer Day.

I’m certainly in favor of celebrating beer. I do so pretty much every day in my house. As regular readers know, I keep track of beer holidays, birthdays and historical dates, too. It’s a hobby of mine. You can follow along on the Brookston Almanac. But I think that if we’re going to celebrate a “National Beer Day” that December 5 makes a lot more sense since that’s when beer became legal again nationally in every state in America in 1933, or at least had the potential to do so. More recently, Lew Bryson, launched April 7th as “Session Beer Day” as a part of his Session Beer Project, which is designed to shine a light on and celebrate low-alcohol, but full-flavored beer. And that, to me, makes more sense because it was beer that was 4% abv or lower that became legal today, which is essentially our modern definition of a “session beer.” 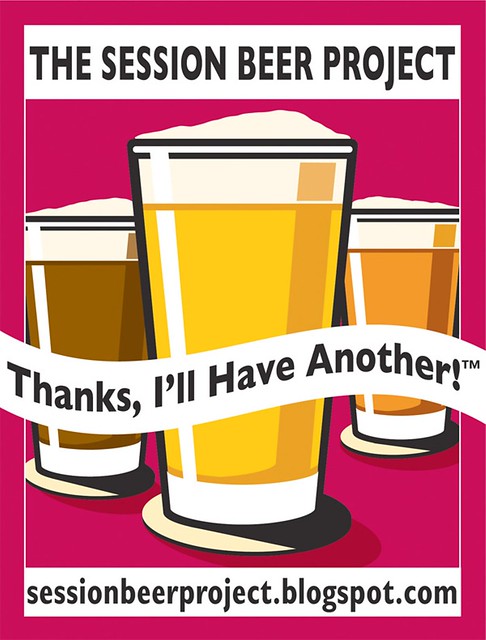 Here’s what I wrote about session beers in 2010, and I think it still holds true today.

While “extreme beers” are the current darlings of the craft beer scene, another kind of beer is waiting in the wings for its shot at the spotlight: Session Beers. They’ve been here all along, but they often don’t get the attention they deserve. If extreme beers are the big bullies of the beer world, loud and brash with huge flavors, showing great depth and complexity, and usually high alcohol, session beers are their polar opposite.

Session beers are, by contrast, light-bodied, with delicate flavors and are often very refreshing. What’s not to like? They’re actually harder to make than extreme beers, because it’s also easier to hide flaws in a big beer. A session beer is a beer that’s naked by comparison. Any defect is immediately obvious.

One of my favorite quotes about making these kinds of beers is by Gordon Biersch brewer Tom Dargen, who once said. “Making [a session] beer is like going to the beach in a thong. You better have all your parts in place or it’s going to be ugly.”

So what exactly is a “session beer?” Defining them is actually trickier than is sounds. They’re not exactly a beer style or even a collection of styles, more like an idea. The basic notion is that a “session beer” is one that you can drink during an entire “session” of drinking and still be relatively lucid and hold up your end of the conversation.

Their most obvious characteristic is that they’re lower in alcohol than many mainstream beers, which are usually around 5.5% a.b.v. — alcohol by volume. While there’s no official definition, most people tend to believe that beers under 5% can be considered session beers, and at least a few set the bar even lower.

Bryson defines them as being 4.5% or below and also includes in his definition that they must be flavorful, balanced and reasonably priced. His simplest way of describing them is “low-alcohol, but not low-taste.”

They’re the ideal for beer for an evening at the pub, spending the night with friends, having a few drinks and talking about the day’s events. That’s one of the reasons most British beers that you’ll find at an average pub in England can be considered session beers, at least the cask or real ales. English ales are usually around 4.5% or less but remain surprisingly full-flavored.

Session beers are also similar to so-called “lawnmower beers,” except that they tend to be more flavorful. Lawnmower beers are most often mass-produced light lagers with very little actual flavor or hop character. The kind of beer you want to quench your thirst after mowing the lawn in the hot sun. Session beers are similarly light-bodied, but should stand apart by having delicate, but very obvious hop, malt, and/or other flavor characteristics.

My friend Martyn Cornell, who’s a British beer writer and historian, gave one of the best statements I’ve ever seen about how session beers are not just about being low-alcohol, but are “a combination of restraint, satisfaction, and ‘moreishness.’ Just like the ideal companions on a good evening down the pub, a good session beer will not dominate the occasion and demand attention; at the same time its contribution, while never obtrusive, will be welcome, satisfying, and pleasurable.”

There are plenty of beers that fit that definition being made by craft brewers in America and by small and large breweries abroad, too. Many area breweries and brewpubs have one or two that can be considered a session beer. Check the alcohol level and then give them a taste to make sure they’re as flavorful as you like.

While many are also light in color, golden to amber, they don’t have to be. One of the most surprising session beers is Guinness, because many people believe that dark beers are heavier beers. But that’s just not the case, as Guinness Draught is only 4% a.b.v.

I should point out that I love many extreme beers and in no way think session beers should replace them, or otherwise diminish their popularity. Extreme beers include some of the best, most experimental, most forward-looking beers ever conceived and brewed. They’ve helped redefine what beer is and what it can be. It’s helped bring foodies into the fold by its ability to be paired with an endless variety of foods, standing up to many dishes that wine cannot. I certainly won’t stop being excited by all the wonderful big beers being made.

But more is not always, well … more. Sometimes less is. Sometimes you just want something that has subtlety, delicate flavors and lets you enjoy your time with friends and family. And that’s why session beers are such a great choice.

Session beers are simply a great concept, and one that promotes both responsible drinking and conviviality, while at the same time not sacrificing taste. I can certainly drink to that.

Essentially every day is National Beer Day, but today should really be Session Beer Day. 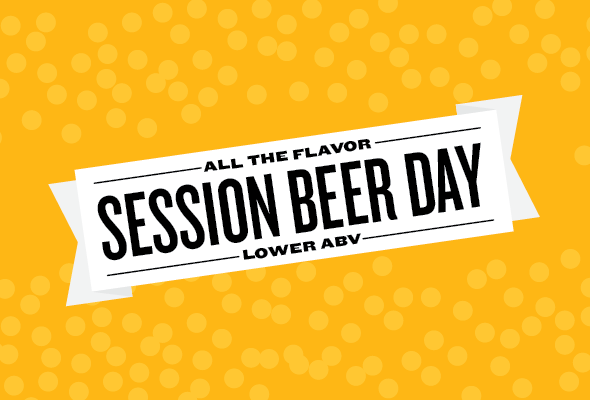 UPDATE 4.8: To underscore my point that many people still incorrectly believe that prohibition was repealed on April 7, witness Summit Brewing’s new poster for 2016, whose title reads “April 7 Celebrate Prohibition Repeal Day.” C’mon guys, I know your heart is in the right place, but this isn’t helping. 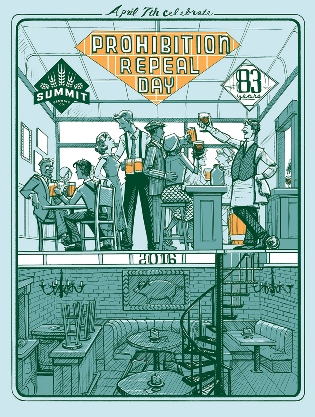