A mix of thanks and “how could you” to Stephen Beaumont for tweeting this story, because now that I know it, I can’t unknow it. According to Digital Journal, a growing trend among Phoenix, Arizona, area youths — disturbingly both girls and boys — is to get drunk by soaking a tampon in vodka and inserting it … well, you get the idea. According to the report, the practice was first identified in 1999, in the Oxford Journal of Alcohol and Alcoholism, although in that instance they wrote about just three case studies all of whom were adults in their late twenties to their mid-thirties. Also, in April of this year, the same thing was reported to be happening in Germany, too.

The latest story’s origin is a Channel 5 KPHO Phoenix TV report, where a Dr. Quan is the medical source, saying they’ll get a “[q]uicker high, they think it’s going to last longer, it’s more intense.” School Resource Officer (whatever that is) Chris Thomas adds “[w]hat we’re hearing about is teenagers utilizing tampons, soak them in vodka first before using them. It gets absorbed directly into the bloodstream. There’s no barrier, there’s no stomach acid to prevent it.” Dr. Quan agreed. “I would expect it to absorb pretty quickly as well, because it’s a very vascular structure.” Okay, that’s probably enough to give you the idea of what “butt chugging” is. Two things leap to mind.

One, this has got to be a hoax. Kids messing with adults and them falling for it hook, line and sinker. Maybe it’s just me, but when I was a kid, not only would this have never occurred to us, but even if it had, we would never have tried it. Heroin addicts shoot up between their toes to avoid detection. Same deal here, apparently, but there are just too many simpler ways to avoid detection than this. It’s just too much committed effort for most people. Or is that just me? Plus, mainstream media, and television in particular, loves a good scare story, something that puts fear into its viewers. This story is dripping with cautionary words, something else for parents to be “concerned” about. Perhaps some idiots did try it, but a growing trend? I’m just not buying it. You?

Second, if it is true, however doubtful, it shows the futility of having 21 be the minimum legal drinking age and avoiding any real education before that time. People will find a way to do almost anything if properly motivated. And few things motivate a teenager more than being told they can’t do something. I keep hearing that line from Jurassic Park in my head. “Nature will always find a way.” And so it goes. 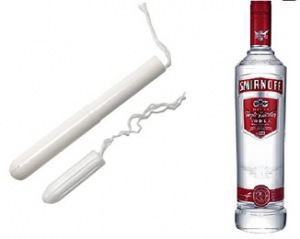 UPDATE: Thanks to Rick at Pacific Brew News for sending me this Tiny Cat Pants post In Which I Debunk the Vodka-Soaked Tampon Myth.