You are here: Home / Beers / Everything We Think We Know About Addiction Is Wrong

Regular readers know that I’m frequently at odds with both the prohibitionists and the addiction community, usually meaning the people and organizations who profit from the status quo viewpoint like AA and others. As I’ve written before, I don’t think alcoholism is something everyone is at risk for and I definitely don’t agree that total abstinence is the answer. If you want any background to what I’m talking about, check out Tipping The Sacred Cows Of Addiction, What Is Addiction?, America’s Addiction Treatment Goal: Perpetual, Lifelong Abstinence or Recent Addiction News Roundup.

I’ve often argued that, from my own experiences, that there as many societal and individual factors for why any individual becomes addicted to something, and it seems to be that it’s the mind rather than genetics or biology that more often determines or causes it.

Here’s yet another powerful denunciation of the prevailing view, entitled Everything You Thought You Knew About Addiction Is Wrong, which looks at ‘experiments in the 1970s by famed professor of psychology Bruce Alexander,” which revealed “that more times than not, the real culprit in addiction is a lack of human connection.” 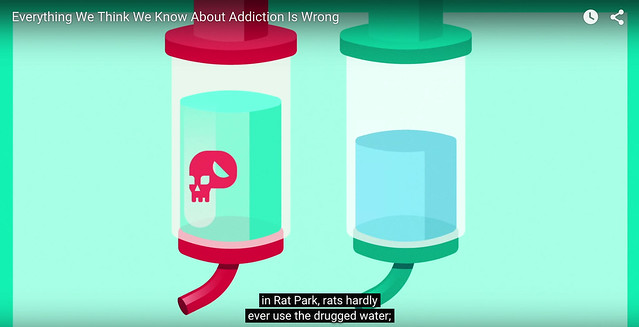 And that makes perfect sense to me, as I’ve observed it’s usually something wrong in an individual’s life that causes them to become addicted to something, and the addiction is the result of that, not the problem in and of itself. The conclusion of the study was essentially “addiction is just one symptom of human disconnection,” and that it’s a more “complex disease” then simply “just say no” can address. Obviously, the video below uses heroin and cocaine as examples, but it’s just as applicable for any addiction, alcohol included. And frankly, it makes more sense than almost anything else I’ve read or heard, and yet seems curiously removed from the addiction debate even though apparently its findings are from the 1970s.

It was created by Kurzgesagt as part of a series for Patreon, and was “adapted from Johann Hari’s New York Times best-selling book ‘Chasing The Scream: The First and Last Days of the War on Drugs.'”