As if you needed further proof that cartoons weren’t always for kids — and still aren’t — here’s an interesting one from 1930. Today was the debut in 1919 of the popular cartoon character Felix the Cat. It was actually the third film using a similar-looking cat, but the Adventures of Felix, released today in 1919, was the first time the name Felix was attached to the character. Felix became very popular and remained so until sound was introduced, when he fell into cartoon obscurity when his transition to sound tanked. There was a much later cartoon version, from when I was a kid, that began in 1958 and was shown on television through at least the 1960s and 70s, and that’s probably the one you’re more familiar with.

But the earlier Felix was darker and less kid-friendly, for the simple reason they were aimed at adults going to see a movie in a theater. 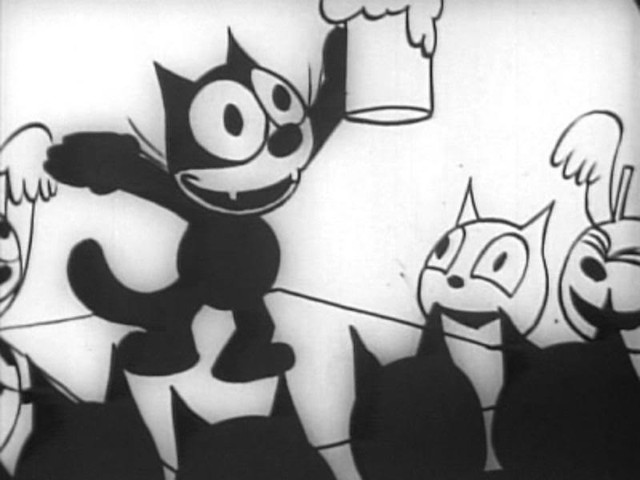 Woos Whoopee was one of Felix’s later cartoons (at least of the earlier black and white and largely silent ones), and takes place in a speakeasy (it was still Prohibition after all).

Felix stays out late, drinking and dancing, while his wife paces at home angrily, watching the clock with a rolling pin in her hand. Finally, well after 3 AM, Felix begins to stumble home and begins to hallucinate. Finally, after a surreal journey, he makes it home around 6 AM. I thought sure he’d be in more trouble, but besides shooting the cuckoo in the clock, not much happens to him after he gets home. Oh, well, at least he had a few laughs and drank a few beers.