Today is the birthday of Lord Benjamin “Benjie” Iveagh (May 20, 1937-June 18, 1992). His full name was The Rt. Hon. (Arthur Francis) Benjamin Guinness, 3rd Earl of Iveagh. “Lord Iveagh (often popularly known as Benjamin Iveagh) was born into the Anglo-Irish Guinness family, being the son of Arthur Onslow Edward Guinness, Viscount Elveden, and Elizabeth Cecilia Hare. He was educated at Eton College, Trinity College, Cambridge, and the University of Grenoble. He inherited the title from his grandfather, The 2nd Earl of Iveagh, in September 1967. He lived at Farmleigh in the Phoenix Park in Dublin and was chairman of Guinness 1961–1992. He was a trustee of two charitable housing associations, the Iveagh Trust in Dublin and the Guinness Trust in London.” 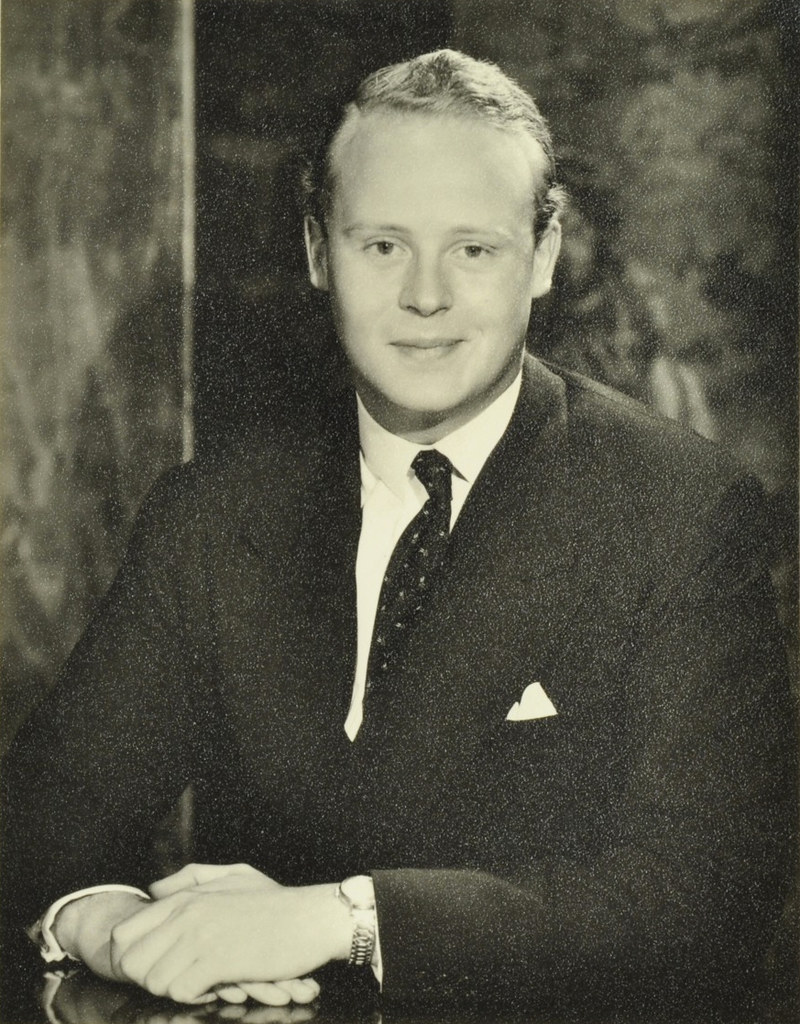 Here’s Guinness’ obituary from The Independent:

As far as the business world is concerned, the Earl of Iveagh will be remembered chiefly as the man who recruited Ernest Saunders to Guinness.

His own business career was at best undistinguished and at times positively disastrous. By the early 1980s, Guinness’s need for a dynamic new chief executive was desperate. With every day that passed, the Guinness family fortune seemed to slip further into the sea as the company’s stock price plummeted new depths. The City was clamouring for management changes.

It was in these circumstances that Saunders, head-hunted from a top marketing job with Nestle in Switzerland, went to Ireland to be interviewed at Iveagh’s house, Farmleigh, in Phoenix Park on the outskirts of Dublin.

Iveagh’s undoing was probably in being appointed chairman of Guinness at too young an age – a mere 25. His reign was marked first by a phase of unbridled diversification away from the core brewing business and then a prolonged period of debilitating decline. By the time Saunders had his first meeting with him, Guinness was engaged in, among other things, snake-farming, orchid-growing, and the manufacture of babies’ plastic potties.

Saunders remembers Farmleigh as a cold, empty, lonely sort of place with ‘an enormous entrance hall lined with dozens and dozens of wellington boots’. In his son’s book Nightmare, Saunders paints a picture of aristocratic decay – lunch at a tiny table in the middle of a huge draughty dining- room punctuated by the sound of a butler padding down forgotten corridors. At one point a cat jumps up on the table and tiptoes through the butter.

Saunders believed that he was seen by Iveagh and the rest of the Guinness family as a kind of gamekeeper. He still tells the story of how at a family wedding he was put below the salt on the servants’ table during the reception. He believes that the Guinnesses, as much as anyone else, made him into a scapegoat for what later occurred.

In truth Iveagh was the perfect chairman for a thrusting, dynamic and unscrupulous chief executive such as Saunders. From the beginning Iveagh abdicated all responsibility and power to Saunders. Often away from London at his home in Dublin, he became like an absentee landlord. At the same time he became a highly useful foil to Saunders, who would use Iveagh to bolster his management decisions. ‘I have spoken to Lord Iveagh and he is entirely in agreement,’ Saunders would say, often falsely.

Indeed, when Saunders was put on trial over the Distillers takeover, there were some famous and bitter recriminations between the two. Time and again, what Saunders said happened was at odds with Iveagh’s account. The sadness of it all was that by the time Iveagh gave evidence, Saunders’s claim that what was being heard was the rambling, confused and muddled account of a befuddled alcoholic suffering from some form of amnesia was all too believable. It was plain to all who witnessed Iveagh on the stand, that by giving Saunders and his henchmen such a free hand, Iveagh had failed in his duties as chairman, and indeed to that extent could be held accountable for the financial scandal that followed. 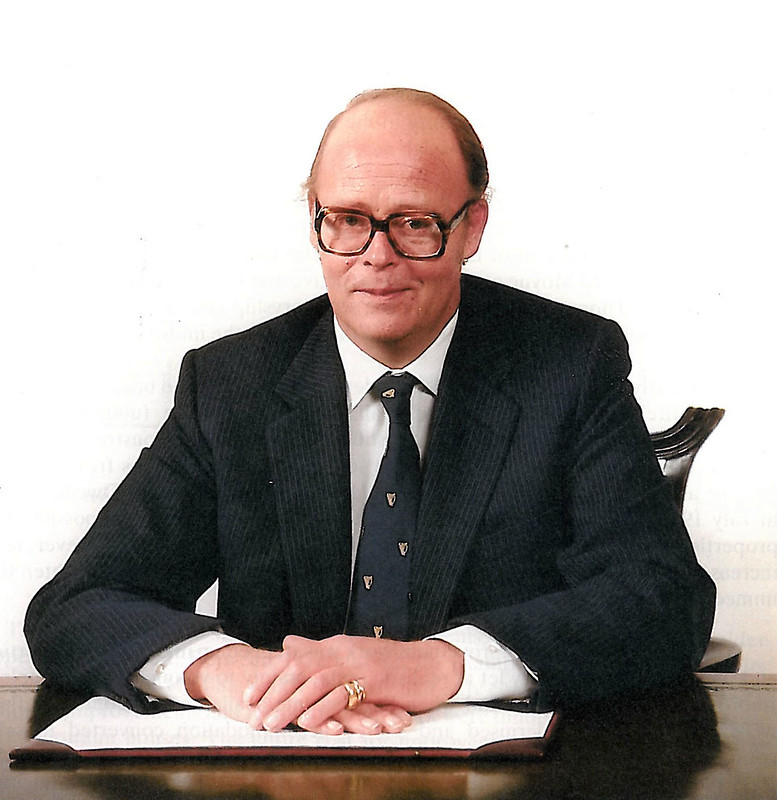 And here is his obituary from the New York Times:

The third Earl of Iveagh, who served as chairman of Guinness P.L.C. during a period of change and turmoil for the British brewing and spirits giant, died here on Thursday. He was 55 years old.

Company officials said he had died of a throat ailment but declined to provide further details.

Lord Iveagh was a descendant of the Arthur Guinness, the brewer who founded the company in Dublin in 1759. Lord Iveagh served as chairman from 1962 until 1986 and as president from 1986 until last month, when he left the company.

By the late 1970’s, the company, whose name is still most widely associated with the stout that bears its name, was stagnating and appeared to be in danger of becoming a takeover target. A program undertaken by Lord Iveagh to diversify out of alcoholic beverages did not do much to improve the company’s performance. Consumption Increased

To breathe new life into Guinness, Lord Iveagh recruited Ernest W. Saunders from Nestle, the Swiss food giant, to be chief executive in 1981. Mr. Saunders began the marketing effort that increased consumption of Guinness stout, whose sales are among the fastest growing of major beers in the world.

Mr. Saunders also began to pursue the acquisition strategy that helped to transform Guinness into a world powerhouse in spirits, especially Scotch and gin. Under Mr. Saunders, Guinness bought Arthur Bell & Son, a Scotch producer, for $574 million in 1985 and the Distillers Company, a leading British spirits company, for $4 billion in 1986.

It later emerged that Mr. Saunders had taken part in an illegal scheme to prop up Guinness’s share price during the takeover fight for Distillers to give Guinness’s stock-and-cash offer a better chance of prevailing.

When the scandal broke, Lord Iveagh at first backed Mr. Saunders but then changed his mind. Guinness’s board, including Lord Iveagh, voted to dismiss him in January 1987. Mr. Saunders later went to jail.

Under Anthony J. Tenant, who succeeded Mr. Saunders as chief executive and is now chairman, Guinness has become one of the world’s most successful and profitable drinks companies. But the scandal tarnished the Guinness name. Over the centuries, the family had earned a reputation as philanthropists and enlightened employers.

The Saunders era also brought about the end of the Guinness family’s dominance over the company. As a result of the issuing of new shares by the company to pay for acquisitions, the family’s stake in Guinness fell from about 25 percent in the late 1970’s to less than 2 percent today. Lord Iveagh’s decision not to seek re-election to the company’s board in May left it without a Guinness director for the first time.

Arthur Francis Benjamin Guinness, who was known as Ben to friends, was born on May 20, 1937, to Viscount Elveden and the former Lady Elizabeth Hare. His father died in action in World War II in 1945, and he became Viscount Elveden and heir to his grandfather, the second Earl of Iveagh.

He was educated at Eton, at Trinity College, Cambridge, and the University of Grenoble.

A shy man and bibliophile who once dreamed of becoming a farmer, he found himself drawn into the family business instead. He was elected to the board of the company in 1958, became assistant managing director in charge of the Park Royal brewery in London in 1959 and succeeded his grandfather as chairman three years later. Married in 1963

He married Miranda Daphne Jane Smiley in 1963 and became the third Earl of Iveagh when his grandfather died in 1967.

Lord Iveagh, who had a home in London and estates in Suffolk, England, and Castleknock in County Dublin in Ireland, loved horses and racing. He also served four years as an appointed member of the Irish Senate in the 1970’s.

Lord Iveagh’s marriage ended in divorce in 1984. A newspaper obituary today in The Daily Mail by his cousin Jonathan Guinness, said the divorce was amicable and Lord Iveagh had been cared for in his former wife’s home in London during the illness that caused his death.

He is survived by their two sons and two daughters. The earldom now goes to his eldest son, Arthur Edward Guinness. 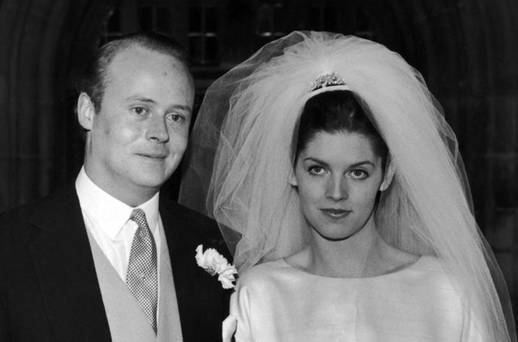 Benjamin Guinness and his wife Miranda Smiley, from their wedding in 1963